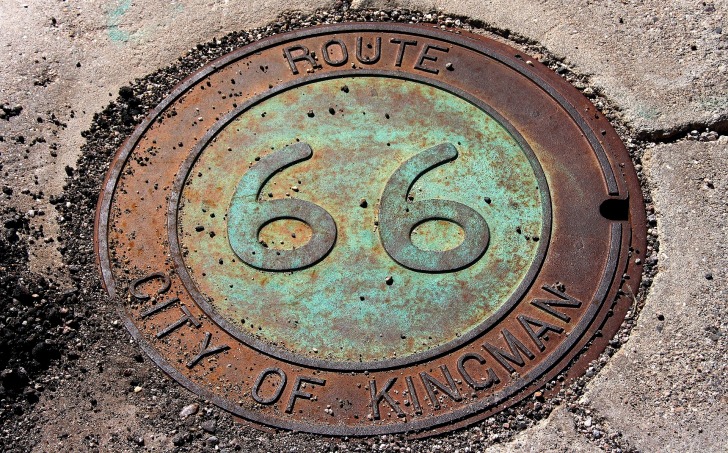 Kingman, Arizona, is as much rooted in the past as it is branching out for the future.

Kingman was a city before Arizona was a state, and played a major role in rail transportation as well.

What looks like it should have been a mining town was actually a railroad town.

It is also a major transportation line now with several large distribution companies and access to major highways in all directions.

The small town has plenty of room to grow in the open desert and the bigger towns of Phoenix and Las Vegas are just a few hours away.

Even the west side of the Grand Canyon with its popular “Skywalk” is just 90 minutes away.

You can skip Napa because the soil of the Kingman area grows some amazing grapes and several wineries serve up the best wine you might ever taste.

There’s a distillery too.

It will be near impossible to leave Kingman without humming… “🎶I get my kicks.. on Route 66…”

There's a low overall risk in Kingman. The crime here has a few things that stand out so I'll walk you through those. This is also a small town, so 2-3 crimes in any category higher or lower can skew the results of the "averages." Overall, this is a town that is trusted with immense amounts of traffic by train and car, for business and personal reasons.

Let's be honest, if you're coming to Kingman you probably are in a car already because it doesn't have an airport and it's quite a hike from the closest commercial airline. If you want to get out of the car and let someone else drive, Kingman Area Regional Transit (KART) is the way to get around the city. There are taxis and rideshares as well. If you don't want to drive through the desert for the attractions, there are many options through Desert Wonder Tours. All of these come with low risk.

There were no pickpockets reported in the latest data from the Kingman Police Department. You should still keep your belongings secured, especially if you're on a crowded tour.

There are several risks here including flash flooding, severe thunderstorms, extreme heat, and wildfires. There's a medium risk, but that holds true across all of Arizona. There is really good information on how to be safe in these events on the Arizona Emergency Information Network website.

There is a really low risk of being mugged as Kingman had just 17 robberies in 2020. In fact, the city hasn't had more than 25 robberies in a year going back to 2010. You're safe here.

There's a low risk in Kingman itself, but there are medium-risk locations nearby like Hoover Dam, Las Vegas, and Phoenix. For example, if Hoover Dam was destroyed, it would knock power out to millions of people in Arizona and Nevada, not to mention the insane amount of water coming down the Colorado River that would wipe out many cities along the way. Luckily, Kingman isn't on the river, but it's close enough to be concerned about either flooding or fallout from the catastrophe.

The scams reported by Kingman Police are more the type to impact locals, like utility bill scams. There's a low risk of you getting scammed. There are a lot of tourist attractions around this area, so make sure you go through the official ticket websites or locations and don't go for some random deals you might find on the internet.

I'm a middle-aged woman who, when I was a young adult, drove through Kingman twice in my adventures. As much as it seems "out in the middle of nowhere", it was also a beacon of destination being nearby (Las Vegas). This is about as comfortable and safe as I've ever felt at a pit stop to get gas and grub on a road trip. I even walked my dog around the area and felt safe. One note I will say for driving safety — if you are driving west on I-40 across Arizona, try to avoid doing that drive as the sun is setting. It goes RIGHT into your eyes and it makes it really hard to see the road sometimes. I had sun blindness for a few days after one poorly timed trip.

The tap water is safe to drink, but it is at a "high" susceptibility rating. Here's what that means from the City of Kingman's 2020 annual report: "A designation of high risk indicates there may be additional source water protection measures that can be implemented on the local level. This does not imply that the source water is contaminated nor does it mean that contamination is imminent. Rather, it simply states that land-use activities or hydrogeologic conditions exist that make the source water susceptible to possible future contamination." So, you are safe to drink the water, but check the water conditions when you get there just to be sure.

Safest Places to Visit in Kingman

I will forever kick myself for not doing more exploring in Kingman because — Wow!

There’s so much to do.

You have to start on the Route 66 stretch of downtown.

There’s a self-guided walking tour that should be available in your hotel brochure display or you can swing by the Kingman Museum to pick one up for free.

I hope you wear good shoes because this is a tour with more than 40 stops.

If you need fuel, I’ve seen several videos of the food from Mr. D’s restaurant and there’s everything from a hot dog with mac and cheese to a burger so big a knife has to hold it together to some of the best old-fashioned sundaes ever.

When you want to relax with a glass of whatever you drink, there are several wineries available.

I was especially moved by the story behind the Stetson Winery that started with a night on the patio with friends and ended in a business dream coming true.

Cella Winery is another popular spot.

You can still see the wagon grooves in the road paved by mine workers to and from the mines.

The area is surrounded by the Hualapai Mountains (pronounced: “Wall-uh-pie”).

You can hike through miles of the desert up and down mountains or head up to Hualapai Mountain Park where you’ve got the desert or pine forests to choose from.

Desert Wonder Tours is a great way to see more of Arizona without having to pay for gas.

The options take you to Lake Havasu, the Grand Canyon, Joshua Tree National Park for a horseback ride, on a winery tour, or a view of historic ghost mining towns.

For one of the best Instagram moments, don’t leave town without taking a picture with Giganticus Headicus.

Places to Avoid in Kingman

Kingman is such a small town that when a crime map tries to show the highest-crime locations, it covers the entire bulk of the city.

You won’t have to worry about accidentally turning into a bad neighborhood as the area is safe.

The biggest thing to avoid is leaving your car unlocked or with the windows rolled down.

There’s a one in 320 chance of a car getting stolen here and it’s one of the biggest crimes reported in the annual statistics.

Also, half of the thefts reported here are shoplifting.

Not that you would even think about shoplifting, but just know the stores are onto this crime trend and taking steps to stop the rising rates.

Police are also involved in a business safety program.

You want to avoid driving out of town for an adventure without a full tank of gas.

There aren’t a lot of stops south and east of here.

Also, bring water and check to make sure the spare tire is inflated before you go in case of any breakdown.

Safety Tips for Traveling to Kingman

So... How Safe Is Kingman Really?

With a population boom, it’s going to bring more crime.

When you look at it just compared to the national average, violent crime, theft, and motor vehicle thefts are above the average.

Robberies and rapes are below the national average.

Violent crime is below the Arizona average, and property crime is above it.

As it stands using all the numbers, there is a one in 37 chance of you being a theft victim.

When I take shoplifting incidents out of that, the risk goes to one in 72.

The city has had 11 homicides in the past decade.

The biggest risk for a tourist is motor vehicle theft and making a poor choice during a severe weather event or not planning for summer desert heat properly.

You should always have your guard up when traveling, especially in a transient and touristy town, but you also don’t have to worry about walking down the wrong street into gang territory either.

The Arizona Highway Patrol watches those like a hawk.

How Does Kingman Compare?