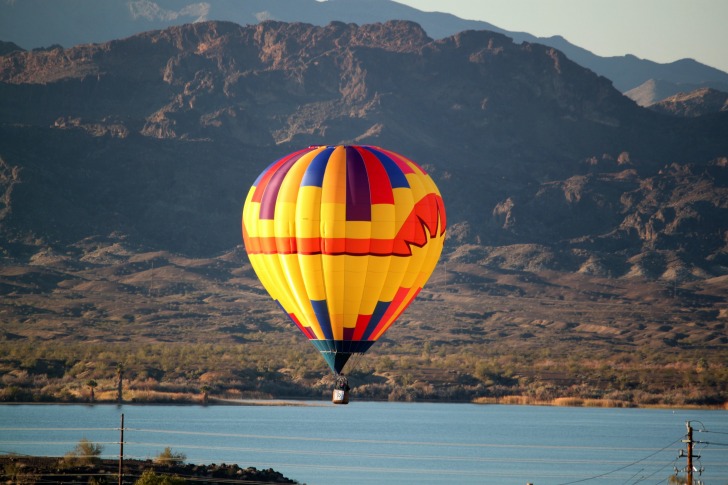 The old version of the London Bridge was brought to Lake Havasu piece by piece and re-assembled.

It’s now a focal point of this lakefront community that is a hot destination for spring breakers and snowbirds.

The design of this city is fascinating and infuriating all at the same time.

Despite all that, 1.5 million people visit annually to this desert Oasis.

You’ll need to enjoy the lake and outdoors if you want to have a good time in Lake Havasu, as there isn’t much else to do in the form of entertainment.

The lake spans 30 square miles and offers a plethora of activities above and below the water’s surface.

It’s an incredible place with a lot of oddities and interesting things to explore.

There's a low overall risk in Lake Havasu. The crime rates are incredibly low and it's a party town where college students on spring break can enjoy it as much as a senior citizen visiting for half the year to avoid harsh northern winters. Once you figure out the unique aspects of this community, you'll be better prepared. We're going to walk you through all of them.

The public bus system in Lake Havasu is THEBRIDGE and offers $1.25 fares with discounts for students and seniors. You can get taxis and rideshares, but there's also a popular company called the 5 Dollar Holler with cheap shuttle rides to certain zones, though prices go up for other zones in the area. All options are low-risk.

Just two purse snatchings were reported in 2020, so there's a low risk. You should still practice basic safety measures, like keeping valuables tucked away in your hotel room and carrying as little cash as possible.

Extreme heat is the biggest concern, as average temperatures from June through September are well above triple digits and only cool down to the 80s at night. Flash flooding and severe thunderstorms are other concerns. An average of 20 severe thunderstorms hit Lake Havasu a year, and since the city is built for outdoor activities, those storms pose an instant danger to everyone outside. There's a medium risk and the city has a comprehensive safety plan to address each one. We'll go through some of that in a little bit.

I had to check four different sources to confirm this was true, but there were only three robberies in Lake Havasu in 2020. There's a very low risk of being mugged.

There's a low risk here, as several bigger targets are in this region, like Lake Vegas and Phoenix.

The Lake Havasu Police Department has a list of recent scams on its website, and right now the biggest scams are spoofed numbers targeting locals. A tourist has a low risk of being affected by these scams.

There's a medium risk for women if they're here for spring break or one of the other amazing events in the city. I say this because Spring Break brings a Mardi Gras-type spirit where "Riverbeads" are thrown out and women are encouraged to bear their chests to get the beads. You want to avoid this hype, as social media photos could impact you for years to come professionally and personally. Also, make sure you never take a drink you didn't see poured or ask for a beer that has a cap on it. Just be safe in this party city and make good life choices while having fun. Stay in groups of friends if you can.

First, the water comes from the Colorado River Aquifer, which can be impacted by many contaminants from trash, sewage, fertilizers, and stormwater runoff. While the water is processed to the approved standards, the water utility says the water source is a "high risk", so the utility must adapt to potential unforeseen contamination. The 2020 water quality report states, in part, "This does not imply that the source water is contaminated nor does it mean that contamination is imminent. Rather, it simply states that land-use activities or hydrogeological conditions exist that make the source water susceptible to possible future contamination." Second, the water in the summer gets hot because the area is hot. It's very hard to get cold water to come from a tap. Water utilities clean the water, but they can't make it the right degree of "cold" for residents. If you want cold water, you'll need a refrigerator.

The first stop is at London Bridge, where it is definitely more than your average bridge.

Only the Grand Canyon is more popular than the London Bridge in Arizona.

You can learn the full story of how the bridge from London ended up in a small Arizona town.

There are bats to spy under the bridge along with thousands of swallows.

The bridge takes you to the Island Mall area, which is a small grouping of restaurants and stores.

There aren’t big shopping centers in this area, but there are unique souvenir shops and a Walmart if you need basic items.

The lake offers 400 miles of shoreline with some spectacular white or brown sandy beaches.

You’ll feel like you’re at the ocean but won’t have to worry about sharks.

Some of the popular beach spots are:

Underneath London Bridge is the Bridgewater Channel, where you can dream about owning a boat for hours as the vessels pass by.

If you get the urge to rent a boat or take a boat excursion.

As you are planning your trip to Lake Havasu, it’s worth noting there are houseboat rentals available as well.

Check out the map of the lake marinas and launch spots from the visitor center to find your perfect boating slide of paradise.

Anglers will love the fishing options at the lake.

There’s bass, panfish, and catfish to be caught.

The biggest fish ever caught in the lake is a 6.3-pound reader sunfish.

Think you can top that?

Sick of the water?

You can scramble through a slot canyon at “The Crack” or get away from people at Mockingbird Wash (there’s also a campsite there called Solitude Cove.

Ripley’s Run is another trail if you like scrambling rocks.

For those who just want to walk the shoreline, there’s a trail for that as well.

See if you can spot all 28 miniature lighthouses on your walk.

Getting hot outside, let’s see what we can do inside

Before we go through the rest of the safety information, I want you to know I am a self-professed “Desert Rat.”

(That’s what people who love the desert call themselves, unfortunately.)

So I’m not some northern person complaining or advising about the heat I don’t understand.

I know the heat of the desert and I’ve done enough wrong to be able to advise on what to do right in the climate.

Avoid hiking in the heat of the day all year round, and in the summer, unless you are an experienced hiker, you should re-think going hiking at all.

The sunrises in Lake Havasu in the summer at around 5:30 am, so an early morning hike should be your only option.

There’s a great hiking guide at VisitArizona.com that walks you through what to take when you hike Arizona’s extreme climate.

They show that most crimes happen in the most tourist-driven areas, which is no surprise.

Keep in mind this area had three robberies in 2020, so if two of them happen downtown, it’s going to show a “high-crime” area even though we know there’s a really low risk.

So... How Safe Is Lake Havasu City Really?

Let’s go through the crime statistics to see just how safe this community is.

Here are your chances of being a victim of a crime:

The real danger is going to come from the environment.

The abundance of outdoor activities should only be enjoyed based on your ability to handle lake water with a potentially strong current from winds, heat that could reach up to 120°(F), and hiking that could reach elevations of 5000 feet.

Start slow with your adventure, and keep hydrated.

Know the signs of heatstroke, which include muscle spasms, vomiting, extraordinary headaches, and body chills.

If you plan properly, this could be the safest and most exciting vacation you’ll ever take.

How Does Lake Havasu City Compare?