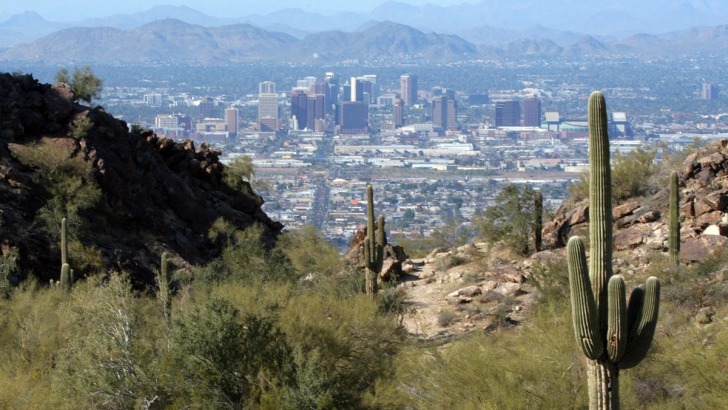 Phoenix, Arizona, is known as the “Valley of the Sun” and is the largest city in the Grand Canyon State.

It’s noted for its warm to excessively hot weather, as being an urban destination, and one of the fastest growing metro areas in the country.

While the city is home to 1.6 million, the greater Phoenix region holds nearly five million people.

“Don’t worry, it’s a dry heat” is the anthem of Phoenix and other desert cities.

The desert climate produces low humidity and some of the most beautiful mountains you’ll see, with the browns, reds, and oranges of geography forming nearly lifelike peaks in the distance.

Some of the most luxurious resorts are in this region, and you’ll be shocked to see people wearing sweaters when it’s 70°(F).

If you look at the sky, you might be blinded by the sun, see a stunning sunset, spot a haboob (dust storm) moving your way, or watch a thunderstorm form and dissipate in the span of an hour – and that can all happen in one day.

You can spend the morning in the city and the afternoon at the top of Camelback Mountain and be back downtown for a nightcap.

Everything you need is close by in Phoenix, but you have plenty of open spaces to explore if you just want to be alone with the desert critters (rattlesnakes, coyotes, scorpions, etc.).

Phoenix has a medium risk with a growing crime rate and is one of the more dangerous cities for pedestrians and bicyclists. The unique city has amazing places to explore, but you're on the right page to find out how to explore safely.

Valley Metro offers buses and a metro rail system, with taxis and rideshares widely available. Renting a car is easy, and you can also tour the city on a rented scooter. Shuttle services and private luxury car rentals are also available. There's low risk with any option, but use appropriate caution on any public transportation system.

There's a low risk of being pickpocketed here but put your guard up if you're in a crowded space or getting off/on public buses or the rail system. That's where people might "bump" into you and try to snatch a wallet from your pocket or purse.

Extreme heat and wildfires are the two biggest risks here. Both can turn into dangerous situations quickly. Flash flooding is also likely when heavy rain falls on dry ground. Haboobs are giant dust storms that can roll through and limit visibility while destroying air quality for a short time. Review the Phoenix Emergency Plan before your visit to learn about the unique weather events here.

There's a low risk of getting mugged in the areas designated for entertainment or tourism, and many of the robberies that happen here are between people who know each other or local businesses. It's worth noting that you should use caution when you stop at businesses like convenience stores that could be impacted by robberies. Try to get gas during daylight hours and avoid confrontations with anyone around such places.

Phoenix gets a medium risk due to its size and the Air Force bases in the region. That risk also comes with a high level of security. You should follow the guidelines of "See Something. Say Something" when it comes to noticing anything suspicious.

The most common scams here target residents. Whether it's a threat to pay money or be arrested or a utility scam, it's not something a tourist is likely to notice. However, you shouldn't let your guard down and avoid any deal that seems too good to be true.

The sexual assault rate in Phoenix is about 40% higher than the national average, but there's no data to support whether those or more likely domestic or stranger danger crimes. Since there's a lot of nightlife in Phoenix, it's smart to travel with friends, limit how much alcohol you drink in a new city, and avoid walking around after dark, especially in unknown areas and dark sidewalks.

The 2021 Water Quality Report shows just one violation that lasted all of five minutes, and the water issue that caused the violation never impacted tap water. Otherwise, the water quality was in full compliance. The biggest water challenge in Phoenix is having enough of it, so you might have to follow strict conservation rules while you're there.

Safest Places to Visit in Phoenix

Visitphoenix.com is the official tourism website for the greater Valley of the Sun region.

Look at the Phoenix Attraction Pass section, where you can purchase a pass to get discounts on multiple tourist attractions.

Phoenix has different neighborhoods to explore, and while it’s impossible to cover them all in this brief summary article, here are some of the safest and most popular neighborhoods.

Papago Park is an urban park that makes you feel like you’re in the center of a wide-open desert.

The Phoenix Zoo and Desert Botanical Garden are in this park area and be sure to learn about the unique Saguaro Cactus, which only grows in this region.

No trip to Phoenix is complete without a hike up Camelback Mountain.

When you see the mountain from a distance, it looks like the shape of a camel sitting down – hump and all.

The hike is a bit challenging with a 1,200-foot elevation gain, but the views are worth it if you’re in shape.

Don’t try this hike midday or afternoon in the summer.

You can drive nearly six miles to the summit if you don’t want to walk or bike it.

The way Wright blended his creative mind with desert elements is truly stunning.

Native American culture comes to life at the Heard Museum.

You can take tours here on horseback, in hot air balloons, on dune buggies, by seaway, or riding ATVs – there’s no limit to the ways you can explore Phoenix and the surrounding desert.

Be sure to use a vendor recommended by the tourism bureau.

Places to Avoid in Phoenix

Phoenix is hit or miss when it comes to neighborhood safety, but when you look at the full picture of violent crime distribution, the areas to avoid are:

Be extra cautious when choosing a place to get gas or stop at a convenience store.

Many of these locations in more dangerous neighborhoods are going to have a lot of homeless people or drug users around.

It’s more likely you’ll be panhandled or verbally harassed, but there are too many gas stations to have to subject yourself to that.

If you are going to Scottsdale, that’s a safer community for gassing up or grabbing snacks.

There are plenty of jokes to be made about the summer heat in Phoenix, but it’s a real threat.

With an outside temperature of 110°(F) or higher for weeks on end, it can melt or overheat mobile devices, cause burns on your skin or hands, and dehydrate your body, allowing heat exhaustion or heat stroke to happen.

Plan as many activities as you can before 10 am, especially if they are outdoors.

Park in the shade or covered parking whenever you can, even if it means walking a bit more to get to your destination.

I lived in the desert for years, and I have two fingers that no longer have fingerprints because I grabbed a hot steering wheel without thinking about how hot the car was inside.

Also, never leave a pet or a child unattended in a hot car.

Not even just for one minute.

Not only is it illegal, but residents will likely break the windows and call the police.

Safety Tips for Traveling to Phoenix

So... How Safe Is Phoenix Really?

It’s a story all too common in American cities in the 2020s.

The violent crime rate is twice the national average.

Robberies and thefts are more than twice the national average.

Assuming you stay in the entertainment and tourism-related areas, you’re likely to face mostly homeless people, drug users, or those in an impaired mental state.

This is where you’ll need strong situational awareness and trust in your gut instincts.

If a situation feels weird, like pulling into a gas station and seeing 10 homeless people smoking crack, move on to another option.

New visitors to the desert also underestimate the damage the heat can do.

I happen to love the heat and would rather deal with an Arizona summer than a Nebraska winter.

That said, there were days I felt like I was baking – like actually in an oven cooking.

Sunburns can happen in 15 minutes without proper sunscreen.

By the time you are thirsty, you’re already dehydrated.

On top of the heat, the dry air evaporates much of your sweat, so you might not notice how much fluid you’ve lost.

If you’re an elderly traveler or snowbird coming for a warm winter, watch out for senior scams.

There is a large population of snowbirds here, and scammers will try to take advantage of them in any way they can.

Phoenix is really a unique city with stunning desert landscapes while still being a large urban and cultural core.

There’s an ugly underbelly of crime, but you’re now better prepared to safely enjoy all the amazing attractions.

How Does Phoenix Compare?