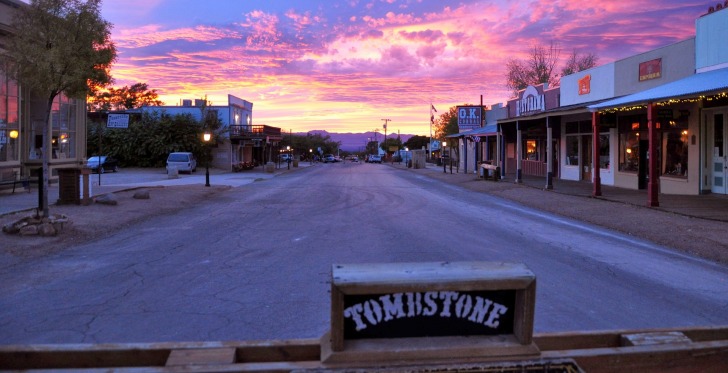 Saddle up for a trip to Tombstone, Arizona, where the lawlessness of the old West left a legacy in this town of fewer than 1200 people.

Make no mistake about it, this is a tourist town.

Every worker you meet will be dressed in Old West attire and it will be tough to get them to break character.

Tombstone got its name from the man who set out to find silver in the mountains.

He was teased by friends in Fort Huachuca, saying “You’ll only find your tombstone out there.”

Well, the man named Ed DID find silver, and also clearly had a great sense of humor as he named the town Tombstone.

As with most old West mining towns, it grew quickly, people prospered, and once the mines were dry or too dangerous, they took off, leaving a ghost town behind.

However, Tombstone was the county seat of Cochise County, so enough people stayed behind to rebuild the town (it burned down in a series of fires) and bring it to life as a tourist attraction and a tribute to the boomtowns that dotted the mountain landscape.

It’s a city that is an American legend and a Hollywood classic thanks to several movies, including the 1993 movie Tombstone.

It has since been labeled “The City Too Tough To Die.”

There's low overall risk if you're protecting your valuables as much as you would in any busy tourist town. The city doesn't have a police department, but there is a Marshall's Office. The Marshall didn't provide crime data to the FBI, living up to the rogue law enforcement reputation of Tombstone, so I've calculated the data from Cochise County (pronounced: "Coe-CHEESE").

You'll need to drive to Tombstone or take a shuttle tour to get here. There aren't taxis in this town and the Trolly is a tour through town that will set you back $10. Kids and seniors get a discount. There's a low risk, but not many options in this town.

There was just one purse snatching in all of Cochise County in 2020, so there's low risk countywide and citywide. You still need to keep your purse or wallet secured, as there's just too much temptation when bags are left unattended.

You've got wildfires as the biggest risk here and flash flooding as a secondary risk. Since Tombstone sits at 4500 feet above sea level, you won't get the extreme heat as you do in Phoenix or Tucson. There's a medium risk for wildfires because they can be very intense when they start.

Five robberies were reported in Cochise County, which is home to more than 125,000 people, so that's a low risk. The gunslingers and stagecoach robbers of the Old West are long gone.

There's a low risk of terrorism here. The closest hard target would be Fort Huachuca, which is about 30 minutes west.

There's a low risk of scams here, but there's a high risk of things that will get your money from you. I lived near Virginia City, a similar tourist-type town in northern Nevada. These cities have ways to spend money at every turn, from turning a penny into a souvenir (for a $2 cost) to appealing souvenirs to extra tours that you might not have budgeted to take. Don't get nickeled-and-dimed here if you are trying to stick to your budget.

Women should feel safe traveling here. There's safety in tour group sizes and most of the people who work here are the only people who live here, so they want their city to stay safe, so the tourist dollars keep coming in. There's a low risk, but always be wary if you're walking around at night and be prepared if you're going hiking into the wild west desert.

I'm going to have to call this a medium risk because there have been several pump failures or contamination concerns over the past few years. While the water might be safe today, you should check before your trip to see if there are any water emergencies. This is posted on the city's website. A state of emergency was declared in January of 2022 for a well failure that threatened the water. To be safe, you might want to stick to bottled water for drinking.

Safest Places to Visit in Tombstone

In town, there are a lot of places to visit, but not too many places to go.

The Old Western Theme Park is a great place to spend a few hours.

You’ll see plenty of reenactments, get to pan for gold, and play some mini-golf.

The Boothill Graveyard is a solemn place to see the gravesites of fallen Tombstone legends.

It’s named Boothill Graveyard due to the people who died and were buried with their boots on.

In downtown Tombstone, there are several theaters to enjoy performances.

The Bird Cage Theatre is the place to go if you want a ghost tour.

The Saloon Theatre and Wyatt Earp’s Oriental Saloon & Theatre have performances throughout the day and night among the living.

If you like flowers, you absolutely need to see the Rose Tree Inn Museum.

The exterior doesn’t do justice to the amazing rose tree found on its land.

It’s the largest in the world and it’s from the roots of a rose tree planted in Tombstone during its heyday.

It’s also worth a trip 23 miles south to the city of Bisbee to see more history and you’ll also get a few more “normal” amenities.

Places to Avoid in Tombstone

If you go exploring outside of the city of Tombstone, avoid going anywhere near an abandoned mine.

These things are found all across the open desert.

The mines are unstable from the top, bottom, and sides.

Take a certified mine tour in Tombstone or Bisbee if you really want to see one.

Avoid waiting until the last minute to book a room in Tombstone.

There are only about 5 hotels nearby and they can fill up quickly.

You can also stay in Sierra Vista or Bisbee and still won’t have a far drive.

Some people like to dress up in western clothing when visiting Tombstone, but I’d recommend avoiding purchasing that clothing in the city.

You might be able to save money by buying it ahead of time online or in your local community.

The tourist towns tend to raise the price far above what you’d pay at home.

Safety Tips for Traveling to Tombstone

So... How Safe Is Tombstone Really?

It’s a “City Too Tough To Die”, remember?

Seriously though, the crime statistics for the city aren’t available, but even when we look at all of Cochise County there’s a low risk.

Here’s how it breaks down:

You’ll find in some travel forums people telling you to stay away since it’s just a “tourist trap” and it’s “dirty” and the people are “rude.”

However, some people complain about visiting Disney.

You have to accept Tombstone for what it is — a small town that had a short life span during the Gold Rush but made such a huge mark on history.

It’s just three blocks long and it’s in the middle of nowhere.

It’s surrounded by the beauty of the desert with hundreds of miles to hike.

It’s 30 minutes to any other town and it’s going to be dusty and nothing fancy.

It’s also going to be a very cool experience to walk in the same footsteps of Doc Holliday and Wyatt Earp.

How Does Tombstone Compare?