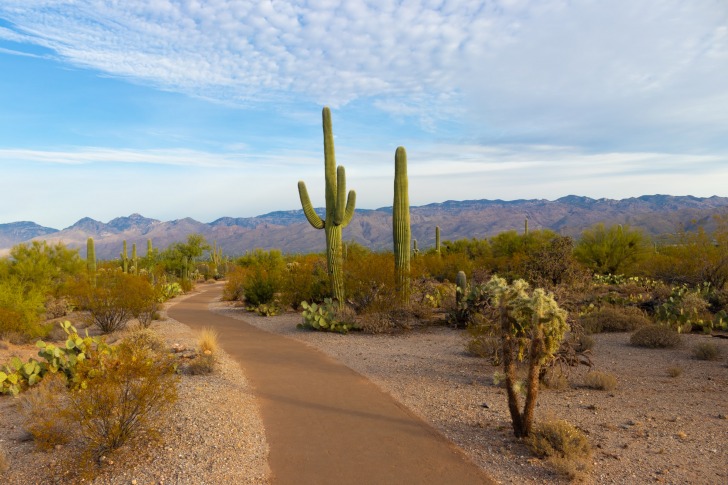 One of the biggest challenges of Casa Grande, Arizona, is figuring out how to pronounce it.

As it stands now, there is no wrong way, as even the Mayor and police officers say it differently.

I laughed a little when I saw the New York Times did an article on this topic, and even one of the most prominent newspapers in the world couldn’t get a consensus.

Another chuckle that comes with this town is that it’s named after the Casa Grande Ruins National Monument, which isn’t even in Casa Grande.

It’s in Coolidge, about 22 miles northeast.

Nevertheless, this city is poised at a great spot in Arizona.

It’s about halfway between Tucson and Phoenix, and at the intersection of I-10 and I-8, giving many travelers a chance to stop and see this fast-growing city.

There are 25 community parks and basic amenities for travelers with fantastic regional and national parks surrounding them.

There's a low overall risk in Casa Grande. The crime rates are mostly low, with a few exceptions we'll go through. The city is a diverse mix of Caucasians, Hispanics/Latinos, Native Americans, and African Americans.

There are not a whole lot of options here for public transportation aside from the Central Arizona Regional Transit (CART ) that goes between Florence, Coolidge, and a couple of stops in Casa Grande. You can get shuttles to and from Phoenix and Tucson, but those are private companies. You can get taxis and rideshares, but not as large in number as other cities. Any form of travel you choose, there's a low risk.

There were four pickpockets reported in this town of 54,000, so that's a low risk. There aren't too many crowded spaces here where you'd need to worry about that either.

The city is prone to extreme heat, dust storms, and flash flooding. There's a medium risk because many of these concerns can happen year-round, and the winters are short with the heat kicking in around late spring.

There were 38 robberies reported in 2020, so there's a low risk of a mugging happening to you. The robbery rate is just under the national average.

There's a low risk here. Nearby Phoenix might be a bigger terror target, but Casa Grande would only be impacted by people evacuating the city core.

The biggest scam happening in Casa Grande involves people scamming businesses for Small Business Association Loans, but that's not going to impact tourists. There's a low risk. You should always be alert for someone coming up with a new scam, so if it involves you wiring money, purchasing gift cards, or exchanging money for a lottery ticket, then you know it's a scam and should leave immediately to report to the police.

Women have a low risk when visiting Casa Grande. Use basic safety precautions and you still shouldn't walk around at night by yourself, but if you're safety smart, you'll be fine.

The tap water in Casa Grande is safe and there's low risk when using it. You should preserve water as much as possible since there's a drought throughout Arizona.

The wild west of the desert has some amazing stories from centuries ago and you can learn all about them at the Casa Grande Museum.

You can also pay respects at the Pioneer Cemetery on the museum grounds.

There are a handful of golf courses in and around Casa Grande and you might have a better chance of getting your preferred tee time than if you tried in busy Phoenix or Tucson.

The Downtown Historic District is a great place to walk around with shopping and dining.

Also, don’t miss the Neon Sign Park while you’re there.

You should take the 22-mile drive to see the Casa Grande Ruins National Memorial.

There are desert plants and animal species to learn about at the memorial site too.

16 miles southeast of Casa Grande, you’ll find Skydive Arizona, where you can parachute from a place and get a bird’s eye view of the Sonoran Desert.

There’s also a shooting range just outside of the southwest corner of town.

If you’re driving to or from Tucson on I-10, you’re going to hear this place before you see it, but there’s an Ostrich Ranch about 33 miles from Casa Grande.

The Rooster Cogburn Ostrich Ranch is a place where you can feed animals from ostriches to bunnies to miniature goats to stingrays.

Places to Avoid in Casa Grande

Crime maps show the southwest part of the area has the highest crime percentage, but some of that area is outside of the Casa Grande city limits.

There’s not that “bad neighborhood” to avoid in Casa Grande.

You should feel safe driving throughout this city and surrounding areas.

If you see the Casa Grande Domes on a map, I’d recommend avoiding that area entirely.

It’s a lure for ghost hunters, the morbidly curious, and — as rumor has it — Satan worshippers.

The domes are the remnants of a failed business entity in the 80s.

The domes are filled with graffiti, trash, and trouble as it’s private property and you’d have to climb a fence to access it.

You want to avoid driving in the sparse areas around this community without plenty of water and a full tank of gas.

Always check the tire pressure when you stop to get gas as the hot, arid climate impacts that.

So... How Safe Is Casa Grande Really?

The only crime statistic that is higher than the national average is theft/larceny.

It’s wise to lock your car doors in Casa Grande and keep the windows rolled up.

With the intense heat, you might be tempted to leave a window cracked.

Instead, buy a sun visor for your windshield to keep the heat from building up in your car.

The city has less than five homicides each year going back at least a decade.

This is a small town desert city, generally overlooked by travelers in favor of its bigger sister cities of Tucson and Phoenix.

This is a great town if you want to get away from the bustle of the city, or if you just need to stop driving for a night on the way to another destination.

You can feel safe staying here and pronouncing Casa Grande any way you want.

How Does Casa Grande Compare?