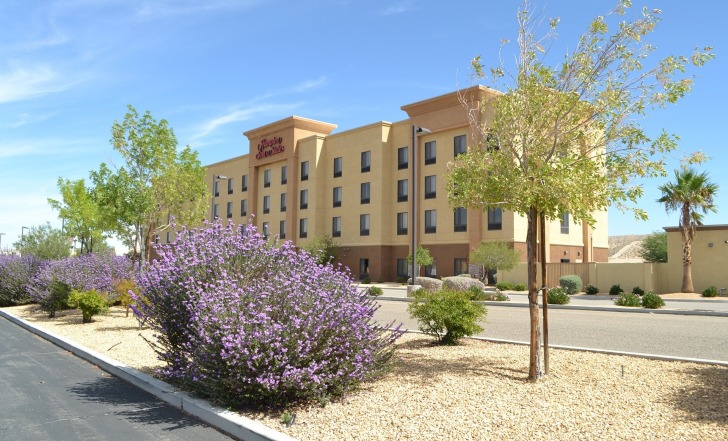 Many a weary traveler has coasted into Barstow, California, on fumes after a long drive west in the desert from Las Vegas.

There’s so much more than a quick stop at a gas station in this small desert town.

Three major highways and interstates meet in Barstow, and it’s rich with railroad history too.

Main Street in Barstow is along the famed Route 66.

Murals on the buildings paint pictures of the town’s history through mining and the railroad.

In places you can’t see around Barstow, the communications or the world and space are housed in NASA facilities.

For a quick detour, you can see the ghost town of Calico, preserved by a local museum.

The empty former mining town holds plenty of ghost stories along the street.

With several popular dining options, from name-brand restaurants to a meal in a train car, you won’t leave Barstow hungry.

The lines get pretty long.

I once waited an hour for a Subway sandwich here, but I was just that hungry.

There's a medium risk in a town with so many people coming in and out quickly. Crowds can get large at popular restaurants and lines can form at gas stations during peak travel periods, like a Sunday afternoon coming back from Las Vegas.

The Victor Valley Transit Authority (VVTA) provides bus service around Barstow and some surrounding cities, and you can also use a taxi or rideshare, but to be honest, having a car in Barstow is critical. Unless you want to be stuck in Barstow, you'll need a ride of your own. There's low risk with public transportation, but you're not going to have as much of an enjoyable trip without a car.

There were just three pickpocket reports, so that's a low risk. I do want to focus on your car getting pickpocketed. Half of the thefts reported in 2020 were from vehicles or auto accessories. Don't leave your car unlocked and windows rolled down, not even just for a few minutes to run in to grab a drink.

Barstow's government has an extraordinarily detailed plan for just about every disaster imaginable. From plane crashes to wildfires to utility failures, they are ready for a worst-case scenario. There's a medium risk due to the extreme heat, earthquake potential, and wildfire concerns.

Barstow is ranked as one of the ten most dangerous cities in California and the robbery rate is one reason why. It's 17 times higher than the national average. That is not a typo. However, when you do crime math to figure out percentages, a small town like Barstow with just 25,000 residents can easily see numbers skewed by the small sample amounts. There were 347 robberies in 2020. You also have to consider the sheer number of people who stop in this city every year. Based on the potential for mugging, this is medium risk.

Considering how close Barstow is to some top government and military installations, we're going with medium risk. Barstow itself wouldn't be the target but would be impacted by an attack on Fort Irwin.

There are reports of scams in Barstow, but none directly targeting tourists. I know I've been approached at gas stations in Barstow by people asking for "just $20 in gas to get home to LA" followed by a unique reason why they don't have money of their own. There's low risk when you look at recent scam reports, but always be on your guard in this transient town.

I don't like to give women any kind of different risk if there isn't crime activity to back it up. However, Barstow could be a bit of a risk for a woman traveling alone IF she doesn't give proper attention to personal safety. There's a medium risk just because the town can get filled with impatient people wanting to get back on the road and it's that possible thieves are looking for a crime of opportunity.

A decade ago this answer would have been different, but now there's a low risk in tap water and it meets or exceeds all standards. If you read about contamination issues in the water, check the date on the article. They will probably be from 2011 or 2012. There was once a ban on drinking tap water since it was so contaminated, but those issues have been fixed.

Safest Places to Visit in Barstow

All places in Barstow are best to visit during daylight hours.

You can scour for deals at the Outlets of Barstow.

Get a new outfit for a trip to Vegas or pick up some essentials at rock bottom prices.

There are also many museums in Barstow to enjoy.

A must-see is the Route 66 museum, showcasing the early days of road trips across the country.

Then visit the Western American Railroad Museum to learn about the early days of the railroad industry and how Barstow played a key part in getting across the country by train.

You can see the second largest space rock ever at the Desert Discovery Center.

It’s called the Old Woman Springs Meteorite and she weighs more than 6,000 pounds.

There is also a desert trail and several exhibits showcasing the magic of the desert community.

The city was bustling in the 1880s as miners dug for silver.

In less than a decade, the town was vacated when silver stopped being a hot commodity.

The buildings have been restored to their original form and it’s a great place to take some incredible photos for social media.

You’ll find some shops and restaurants here too.

Places to Avoid in Barstow

Try to stay east of where I-15 meets Barstow Road.

Barstow has little to no nightlife.

It’s one of the biggest complaints of residents.

You don’t want to be out and about in Barstow at night unless you are coming and going from a restaurant.

Don’t drive around, don’t stop, and ask someone for directions or guidance.

Avoid leaving your car running or unlocked when you go into a business, even if it’s just to use the restroom.

Normally this is where I’d tell you to put all valuables in the trunk, but if you are traveling you might not be able to hide all the personal items since your car is filled up with stuff.

Cover what you can with a blanket, and use an anti-theft device on the steering wheel if you have one.

Safety Tips for Traveling to Barstow

So... How Safe Is Barstow Really?

This is a town where people generally stop and go on their way to somewhere else.

Even if they spend the night, it’s just to get a meal and some sleep after a long day of driving.

There is not really much to Barstow for a road tripper, aside from a few museums and hot spot restaurants.

Barstow isn’t a place you want to stay long-term for its versatile position in the desert.

Victorville or Palmdale might be a better option for that.

There are gangs here and a drug problem.

You don’t want to haphazardly walk around this town.

Stay in your car with the doors locked until you arrive at your destination.

Always park in well-lit areas and stay inside at night.

It’s not a town many people can avoid due to its prime location on several major routes, but have your head on a swivel and be cognizant of your surroundings at all times.

How Does Barstow Compare?