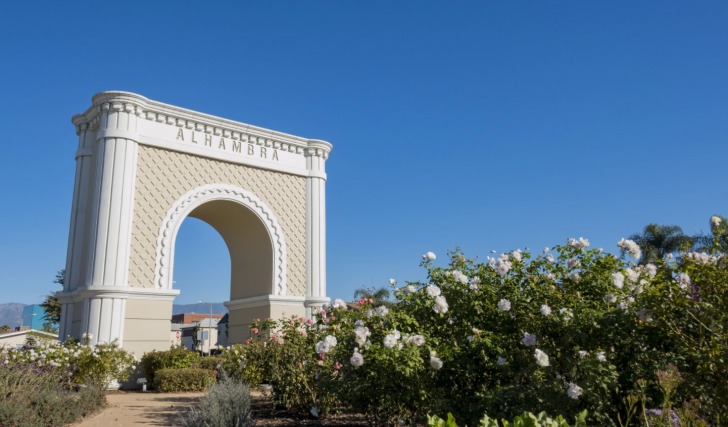 This article is all about Alhambra, California, and is not related to the city in Spain.

It is named after the Spanish town as the original owner of the land had a daughter who was particularly fond of Washington Irvin’s Tales of the Alhambra.

This is more of a residential community, with just a handful of hotels.

Its location and safety ratings are what make it appealing to residents and tourists.

This is an ethnically diverse community with more than half of the people living here of Asian descent.

36% are Latino or Hispanic, and 2% are African American.

Caucasians make up 9% of the community.

Alhambra has fought off the tough crime waves that usually surround cities near downtown areas, and keeps its charm while modernizing as needed.

One thing you’ll notice in this historic community is that the houses are all from the 1950s and 1960s.

Few homes were built after the turn of the new century.

There's a low overall risk. Crime statistics are at or below national and state averages. The community is a tight-knit group with plenty of events to solidify that relationship.

Alhambra Community Transit (ACT) is the local bus service and rides cost just a quarter. You can also get to the MetroLink station through ACT. Taxis and rideshares are available. There's low risk with all options.

There's a low risk here. 10 pickpocket reports were made in 2020, which isn't that high considering some of the comparisons in nearby cities. You do need to keep your wits about you as this is a community close to a major city, but I was even surprised by the low pickpocket rate. Looking back to 2019, before the pandemic, there were just 5 reports.

You've got to worry about earthquakes, wildfires, and flooding in all Los Angeles area communities, and Alhambra is no different. The city has a comprehensive plan to deal with any natural disaster that might happen. There's a medium risk, but you can get educated about each one to feel safer during your visit.

The robbery rate is at the national average, and only a small percentage of robberies were in public places, so there's a low risk.

A medium-risk will hold true for all the Los Angeles Basin. It's the second-largest metro area in the country with a lot of tourist attractions and major companies. That's going to intrigue any terrorist group. Homeland security is aware of the risk here and takes steps to keep it safe.

While there are no specific scams in Alhambra to give anything more than a low risk, you do need to be aware of some scam trends. If someone tells you they won the lottery, but aren't a U.S. citizen, so they can't cash the ticket, don't give them money in exchange for the ticket. It's a scam. If anyone asks you to buy gift cards for any reason in exchange for something, that's a sure sign of a scam.

There's nothing in the crime numbers that should concern a female traveler. Even the rape crime rate is 60% lower than the national average. You do need to be cautious when walking around at night and respect the different customs of this multi-cultural community, but if you've got your wits about you, you should be safe in Alhambra.

Alhambra tap water is safe and there's a low risk of using it. It meets all standards and is part of a greater Los Angeles area initiative called the Safe Clean Water Program to make rainwater drinkable and rely less on outside sources of water.

Safest Places to Visit in Alhambra

Just about everything a traveler could need is located off of Main Street in Alhambra.

The city is also bursting at the seams with mom-and-pop ethnic restaurants, thanks to that diverse community.

Alhambra was once designed as and nicknamed the “City of Homes” and this is one place you can feel safe driving around neighborhoods to appreciate mid-1900s architecture.

There are no master-planned communities here.

Phil Spector’s former home is located at 1700 Grand View Dr, but there is a gate surrounding it and you won’t be able to see much from the street.

Don’t try to go onto the property as it is owned by someone else now.

Burke Heritage Park and the Alhambra Historical Society are a great way to spend the day, and it’s all free.

Check the hours of the museum, however, as it has limited days and times it’s open.

Almansor Park has a golf course, pool, and picnic areas in addition to playgrounds for the kids.

There’s also a restaurant on the park property.

The golf course is open to the public.

Places to Avoid in Alhambra

Crime maps show the most dangerous part of Alhambra is south of I-10 (or The 10 as locals call it).

The central northern part of the city has a bit higher crime rate.

Keep in mind, this is a city that has crime rates on average with national rates, so while it’s not super dangerous, it’s also not 100% safe.

You should avoid driving around at night if you don’t know the area well.

You can easily get turned around and might end up in a not-so-safe neighborhood.

There isn’t a lot to do in Alhambra, and unless you’re there just to visit family or friends, you’re going to be venturing outside of Alhambra for sightseeing.

We recommend reading about the other neighborhoods around Alhambra on our website to get a feel of safety in any city you’ll be visiting.

Safety Tips for Traveling to Alhambra

So... How Safe Is Alhambra Really?

Violent crime is half the California and national averages.

There’s a one in 473 chance of being a victim of a violent crime.

For other crimes, here’s the risk:

This is a community of older homes, and sometimes people will assume “older” means “more dangerous.”

That doesn’t hold true in Alhambra.

It’s a city that embraces the historical aspects of its neighborhoods and takes pride in the preservation the city has prioritized over the years.

The Main Street area has been under many renovations to make it easier to visit and safer to walk down the street.

As with most cities, you shouldn’t go walking around aimlessly at night.

You shouldn’t keep car doors unlocked or windows rolled down.

You do want to lock your doors and leave valuables safely stored away when you’re out in the community.

How Does Alhambra Compare?