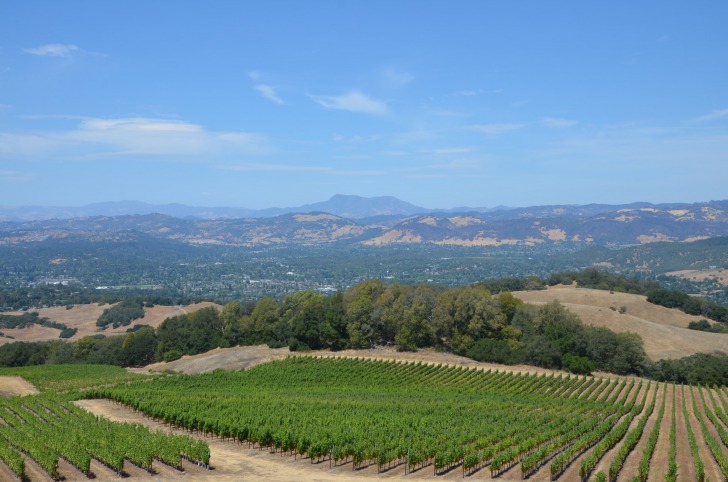 Sitting at the apex of Northern California wine country, just taking in the view is worth the trip.

We’re going to talk about more than just wineries on this safety tour of Santa Rosa, including a museum and research center for the beloved Charles M. Schulz, who made this his adult home and spent his golden years making people of all ages reach for the cartoon section with the Peanuts franchise.

There are also nearby redwood forests towering overhead and just a short jaunt to the beach where you can take in Bodega Bay, a slice of Alfred Hithcock’s fame.

This quaint area has seen catastrophes over the years and continues to rebuild and innovate the way the world sees wine.

It’s hard to imagine as you look across the vineyards that just five years ago the most catastrophic wildfire in California history burned through.

Santa Rosa is a city of resilience and elegance, with the determination to get through any challenge that comes its way.

There's a low overall risk with a few elevated risks to acknowledge. There are some unsettling crime trends and inherent weather risks, but nothing that should keep you from visiting here. An educated traveler is a safe traveler.

Santa Rosa is best enjoyed with your own rental car. There are just so many miles to cover that it's hard to get on public transportation or the cost of rideshares. You do have those other options, however. The Santa Rosa CityBus runs routes in the area. You can also safely get a taxi or rideshare. All options are low-risk.

There were 11 pickpockets reported in 2020, giving it a low risk. This is a city with almost 180,000 people and 11 pickpocket reports shouldn't make you concerned about traveling there.

All you need to do is look up the Tubbs Fire of 2017 to see just how bad wildfires can get in this area. The photos and stories are heartbreaking. 22 people died in Sonoma County during the fire and Santa Rosa was evacuated with very short notice. There's a medium risk because of this, but if there's a fire burning nearby during your trip — get out.

There's a low risk here due to the small number of highway robberies reported in 2020. It was just a fraction of the robbery numbers.

The dangers here come from nature, not from terrorists. There's a low risk of a terrorist attack.

There aren't any scams reported lately that could impact tourists, so it's a low risk. Things to watch for, in any event, are rental scams that seem way too good to be true or ask for a wire transfer to pay for the rental. Discount tickets sold on unofficial websites like Craigslists are a risk as well.

There's nothing in the crime statistics that suggests a woman would be any more in danger here than a man, so it's a low risk.

Tap water during normal circumstances has a low risk. It meets all requirements of state and federal agencies. The bigger issue is the use of water. As I write this, there is a mandatory 20% cutback in all use of water in Santa Rosa, and that's not all that uncommon. California has a water crisis and any steps to lessen the burden of water use are ideal. For example, cut your shower time in half. Turn off the water while brushing your teeth. Only do full loads of laundry, not a bunch of smaller ones. Use water wisely here.

As a writer, it’s annoying when someone writes something better than I can, but I think the tourism site for Santa Rosa says it perfectly: “Mother Nature Does Her Best Work Here.”

A great place to start is the Museum of Sonoma County to learn about the history of this unique region and take in some fine art.

Then head over to the Charles M. Schulz Museum and Research Center, where there are seven tours to choose from and an ice arena named after Snoopy.

Warm-up at the Puppy Cafe before heading out.

Nearly 500 wineries dot the landscape around Santa Rosa and throughout Sonoma County, so you’ll have to pick which one (or two or three) are your preferred venues.

One of the most popular is the Kendall-Jackson Wine Estate & Gardens.

Some wineries are more family-friendly with petting zoos and juice tasting for the kids.

About 40 miles west, you can visit Armstrong Redwoods State Park and walk among the redwoods, a surreal experience.

You can pay to get into the park or leave your car at the entrance lot and walk into a forest canopied by trees as old as 1,400 years.

Here you can enjoy the rocky beach and bay while walking in the footsteps of Tippi Hedren in Alred Hitchcock’s The Birds.

Placess to Avoid in Santa Rosa

Crime is pretty well spread out throughout the city, so there’s no bad area to avoid.

As with most cities, stick to the tourist spots and don’t venture off main roads.

There is wealth in Santa Rosa and there is poverty.

If you are exploring the outdoors, you will come across paths or sections of parks that are closed off.

This is generally due to wildfire damage that happened.

It’s dangerous to go into these areas, so don’t cross the boundaries.

Healing a forest or land after a major wildfire, as Santa Rosa has seen the past few years, takes time.

It’s a delicate balance of nature healing itself, and the man helping the process along.

Avoid asking people about the wildfires that have harmed this area.

Some people lost neighbors or loved ones in the fire.

If they bring it up, then it’s fine to continue the conversation.

Just be sure to discuss it from an empathic perspective, not an odd fascination perspective.

So... How Safe Is Santa Rosa Really?

It’s easy to imagine Santa Rosa as a pristine town with easy routes to beautiful wineries.

There’s just more to her than that.

As with any Northern California city, there’s going to be gang activity that also fuels drug crimes.

There’s a sizable homeless population of 2700.

Chances are if you are coming here, it’s just for a place to rest your head and take in some of the local attractions before exploring wineries.

Just be sure to stay within the tourist areas.

Driving around neighborhoods randomly just to look at houses, as I like to do when I visit a new place, isn’t wise.

While there’s no imminent risk of doing this, it’s just not a smart move and there’s too much else to do in this beautiful area.

The chances of being a victim of violent crime are one in 195.

It’s higher than the California average, which says something because California has some really dangerous cities.

Santa Rosa isn’t a dangerous city, but it’s got an edge to it that you won’t see in a travel brochure.

How Does Santa Rosa Compare?