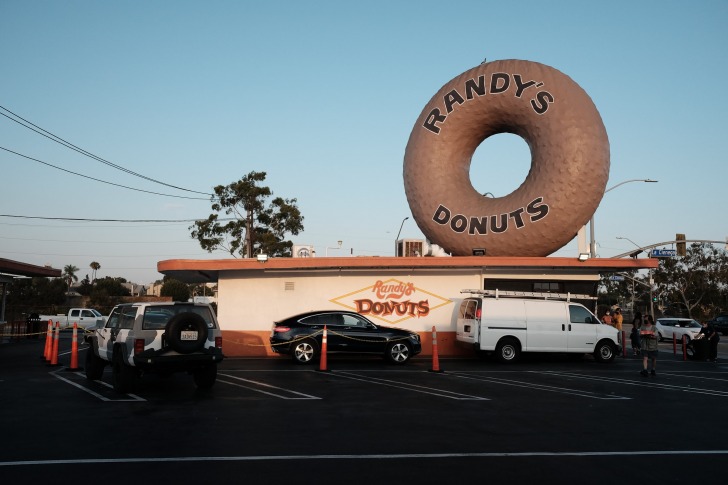 Inglewood is a city in the Los Angeles metropolitan area.

The thing you’d probably recognize most in this city is Randy’s Dougnut sign.

It’s been in many movies and TV shows over the years.

Inglewood is also home to the new SoFi stadium that houses the Los Angeles Rams and Chargers.

This stadium is home to the 2022 Super Bowl and the College Football Championship in 2023.

The Hollywood Park Casino is also in this neighborhood.

It’s getting more crowded in that area with the Intuit Dome being the future home of the L.A. Clippers, opening in 2024.

You also can’t get much closer to Los Angeles International Aiport (LAX) than Inglewood.

You’ll also find plenty of car rental businesses in this area because of the proximity to the airport.

There's a medium risk overall in this neighborhood. It's in a major metro area, which is going to see more crime, and it can be one of the busiest areas when an event is happening at SoFi Stadium, leading to more criminals looking for crimes of opportunity. It's also close to one of the biggest airports in the nation, which means more traffic from outsiders constantly, causing more potential for crime.

There's a low risk. Taxis and public transportation are strictly governed by the city and state, plus if you arrive at LAX there is a short drive to your Inglewood location. This is the best city to get a rental car with so many options.

There's a medium risk with crime statistics showing a one in 79 chance of being a victim of a theft.

California and the Los Angeles area are at a medium risk of natural events like earthquakes and wildfires. It doesn't mean these events will happen often, but when they do it can get really bad quickly. Wildfire smoke can ruin air quality or shut down freeways. Earthquakes can cause major destruction, though on average the shakes from the quakes are noticeable but not destructive.

There's a one in 300 chance of being a robbery victim here, but we're going to still give it a medium risk because chances are you are in Inglewood for a big event that could bring out more criminals. It's important to keep your belongings close to your body. Buy tickets ahead of time if you can, so you don't have to carry a lot of cash and credit cards. If someone does rob you, don't fight back. You can report a crime online or call 911 if it's an emergency.

There's a medium risk here being that L.A. is one of the biggest metro areas in the country. Especially during big events like the Super Bowl, the terrorism experts in the country are keeping a watchful eye. It's wise to always abide by the "see something, say something" rule when it comes to ANY suspicious activity, deserted package, or concerning behavior by a person.

There's a medium risk of scams. While no scam data exists for this area, when you consider the sheer number of travelers who come through this area, the other higher crime rates, and the brazen potential of criminals in a large metro area, scammers are more likely than not. Remember basic scam safety—if it seems too good to be true, it is.

We're going with a medium risk here. While gender-specific crime data isn't given, there are about 50 rapes on average a year in Inglewood, and the crime rates are higher than the United States average, it's good advice for women to travel in pairs and avoid dark streets at night. There aren't a whole lot of tourist destinations in Inglewood outside of the big draws, so there's little reason to be in a neighborhood at night.

In 2021, all tap water in Inglewood was compliant with state and federal standards, giving it a low risk.

Safest Places to Visit in Inglewood

There is less concern about the safest place to visit in Inglewood and more about the few places there are to visit that would draw a tourist in.

If you are in Inglewood for fun, you are probably here for a visit to the stadium or Hollywood Park Casino.

SoFi Stadium is one of the most policed parts of town when there’s a big game or event there, so you feel safe while still practicing the best personal safety steps.

The Foum is an iconic entertainment venue that underwent renovation in 2014.

Randy’s Dougnuts brings tourists in for the food as much as the iconic sign.

There’s also a branch of the popular Southern California chain “Roscoe’s House of Chicken and Waffles”, a combination that sounds a little odd but is worth trying because it’s surprisingly delicious.

Chicken and Waffles first became an American dish in the 1930s at an after-hours restaurant.

Being that it was “too late for dinner but too early for breakfast”, this dish was created to satisfy both appetites and has been popping up across the country ever since.

Edward Vincent Jr. Park covers 55 acres in Inglewood and has a variety of indoor and outdoor activities.

The safest time to visit here is between sunrise and sunset.

Avoid it at night, especially if you are alone.

Places to Avoid in Inglewood

In 1995, Tupac Shakur wrote a song about California Love, and in the closing lyrics, he bellowed “Inglewood is always up to no good”, a lyric that is stuck in my mind as I write this entire piece.

Does it hold true now?

The crime rate is higher than in the average American city.

Over the past 10 years, it averages about 14 homicides a year.

It’s not up to no good as much as it’s trying to rectify that reputation by building a safer, more tourism-friendly community.

The city is only 9 square miles, so there aren’t many places to avoid in a city that isn’t that large.

You should not be in random neighborhoods, especially after dark.

While this writer has NO idea how anyone can afford a home there based on that salary, there are some more run-down neighborhoods in Inglewood.

Safety Tips for Traveling to Inglewood

So... How Safe Is Inglewood Really?

We broke down the crime numbers from 2019, which are the latest the city has provided:

You’ll need to weigh the pros and cons of your visit to Inglewood.

For touring the greater Los Angeles attractions, there are safer communities that might cost a little (or a lot) more.

If you are just there for a game or event and only plan on going to the hotel and venue and back, then you should be fine.

If you just need to be close to the airport, this offers that convenience.

It’s just not a city where you’ll want to go wandering around as you would other, more tourist-centric areas.

How Does Inglewood Compare?