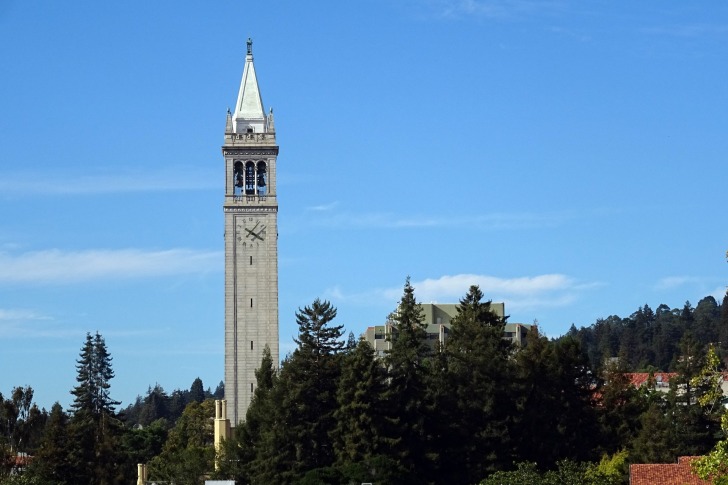 History will remember Berkeley, California, as a city of hippies fighting for free speech and civil rights, a spirit that spans many generations.

The same spirit is alive and well today in Berkeley, and as the tourism video for the city says, “We’re a cultural center, with a counterculture soul.”

UC Berkley is the pride and joy of this east San Francisco Bay area, and it brings a lot to the community for everyone.

From Flower Power to power players in technology and government, Berkeley is a smart town ready to move into the future while holding on to its strong roots.

The food scene is strong here with more than 250 options to satisfy every palate and options for every food preference you can imagine.

Whether you choose to dine near campus, on the bay, or downtown, you’re sure to have a unique dining experience.

This is a place to let your inner artist out.

More than 100 cultural art options fill this city, from performance to fine art.

Nearby Oakland offers a variety of tourism options as well, making Berkeley a perfectly positioned city for a trip to the East Bay.

I've retyped this sentence three times, going back and forth looking at the numbers. The artist in me wants to tell you Berkeley is safe and low risk, but in reality, there's a medium risk and we'll talk through why.

Two of the most popular public transportation systems in the Bay Area go through Berkeley — Bay Area Rapid Transit (BART) and Caltrain. You have AC Transit as well for bus service through Alameda and Contra Costa counties. There are taxis and rideshares as well. Berkeley also has a popular car-share program, where people who don't have cars actually share a vehicle for commuting. All options come with low risk.

Wow, there are a lot of thefts in Berkeley. The numbers have also been pretty consistent for the past decade. There were 47 reports of pickpockets or purse snatching in 2020, but my spidey senses told me to check 2019 since 2020 was a pandemic year. I was right. 135 were reported in 2019. That's still just a one in 920 chance of being a victim, but it's higher than any other city I've researched in California. We need to call this a medium risk.

Earthquakes and wildfires are two disasters that could impact Berkley. The city has complete readiness guides to review on its website, so you can feel more prepared when you visit. There's a medium risk, not because they happen often, but because when they do happen it can be really bad.

The robbery rate is almost three times the national average. 46 of the 453 robberies reported were listed as "highway robbery", which is most likely to impact tourists. While it doesn't seem that dangerous in a city of 124,000 people, some of my other research online from locals persuades me to give this a medium risk. We're going to get more into this topic in a little bit, so stay tuned.

There's a medium risk here with such a prominent university near military installations and with a large population. That natural disaster risk website also discusses terrorism preparedness, so you can learn specifics there under the Berkley Ready section.

From towing scams to housing scams, there are a plethora of them going around Berkeley, giving it a medium risk.

There were 47 rapes reported in Berkeley and 4 on the campus. When you do the crime math, that's slightly above the national average. I'm going with a medium risk here just because there are so many other high crime numbers. It's important to be vigilant and practice good safety protocol wherever you go in Berkley.

There's no worry about tap water in Berkley. It's a low risk and meets or exceeds all requirements.

Safest Places to Visit in Berkeley

No matter if you have a connection or not, you need to visit UC Berkeley (nickname “Cal”).

The stunning architecture with rolling hills behind it sits high enough that you can see a full view of the bay from campus.

Telegraph Avenue is where the real flower power resides, in a Bohemian neighborhood that will free your spirit with every step.

This is a very affordable part of town too, as it caters to college students on a low budget, without sacrificing the quality of food.

The marina is a great spot to see the water and visit Cesar Chavez Park.

With seven miles of trails through 100 acres, this is a great place to burn off the calories of all the great food in town (feel free to eat as many carbs as you want!).

Here you’ve got a lot of trails and nature, but also an antique carousel and feeding farm.

There’s also a train that goes around the park if you’re tired of me telling you to do even more walking.

There are also several great rock climbing locations in Berkley, including Indian Rock Park, and it’s perfect for those just starting the sport.

Places to Avoid in Berkeley

Crime maps (and history) show the south side of town is more dangerous than the north side.

The closer you get to the Oakland border the more concerns you might have about driving around, and certainly don’t walk around there at night.

There’s concern about being west of the interstate and near the marina after dark, so do that tour earlier in the day.

People’s Park has a lot of homeless people and isn’t the safest place to be night or day.

You really don’t have a reason to go there unless you think you need to call my bluff (only I’m not bluffing).

Berkeley is a diverse city in culture, politics, arts, and gender identity.

You’re going to have some of the most inspiring conversations of your life here, but these topics can also spur dissension.

Keep your calm and learn a different viewpoint, or just stop talking about whatever is heating up the discussion.

Safety Tips for Traveling to Berkeley

So... How Safe Is Berkeley Really?

Berkeley was ranked the 64th Most Dangerous City by roadsnacks.net in 2021.

What’s odd about the crime statistics is that the homicide rate is incredibly low while the violent crime rate is higher than the national average.

This is a city that built its reputation on free speech and speaking your mind, but hate speech is unacceptable.

In February of 2022, a crime spree left anti-Semitic messages throughout a local community and there was outrage.

The city issued a statement saying, in part, “As the center of the free-speech movement, Berkeley has always supported people’s rights under the first amendment.

But let’s be clear – the Berkeley City Council and our community soundly reject and condemn ANY hate-filled messages and any inference to discrimination of any kind to any person or group.”

It’s a city where 74% of people have a bachelor’s degree or higher, yet 19% of the population lives in poverty.

It’s a city of contradictions and soaring crime levels, with some really cool parts to visit.

Stay in the tourist spots or popular hang-out areas when you go.

Try to do as much sightseeing as possible in the daytime.

Check crime maps on the police department website before you go to get the most recent crime information.

How Does Berkeley Compare?