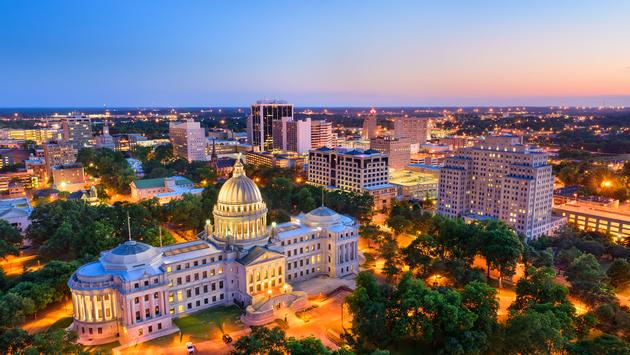 Jackson, Mississippi, is the City of Soul in the heart of the Magnolia State.

If you’re wondering why this city sounds familiar, it might be because of the popularity of the book and movie based here called The Help.

(You is Kind. You is Smart. You is Important.)

This city brings a rich culture, with some stories to make you laugh while others can make you cry.

It was a pivotal place in the Civil Rights Movement and has a museum bearing the name to remember those who fought for civil rights and those who died trying.

Jackson is a city too tough to let history define it and comes with Southern hospitality and the best (okay, probably only) Pig’s Ear Sandwich you’ll ever eat.

Soul food is found on every corner, and culture abounds in this city, where the air is thick as the accents of its residents.

Music is at the heart of Jackson, and several studios are still open for tours.

There’s a rich art scene, from performances to sculptures to art galleries.

Sign up through the VisitJackson.com website to get an Art Pass, where you can check off the art locations as you visit and be eligible for a prize.

Jackson has come a long way through trials and tribulations and still has a ways to go.

There's a high overall risk here, with Jackson having the highest murder rate per capita in the entire country. That's a higher average than even Atlanta or Chicago. This is on top of the historically dangerous reputation the city has, so visitors need to be aware of the risks to enjoy the reward.

JTRAN is the public bus system, but like much of the city, it has faced many challenges in the past few years. There weren't enough bus drivers, so the schedules were reduced. This caused a community outcry because so many people rely on buses to get to and from work. It's safest here to get your own car, but that will come with its own safety precautions. Taxis and rideshares are available. There's a medium risk any way you look at it with crime rates so high.

There's a low pickpocket risk, but that's not necessarily a good thing. There aren't a lot of crowds here to fall victim to a slick pickpocket. On top of that, criminals here are more likely to take your stuff by force than by manipulation.

Severe thunderstorms, tornadoes, flash flooding, and intense lightning can happen throughout the year. Tropical storms can hit the coast as hurricanes and move heavy rains and storms up the state. Even Memphis is known to get tropical storm remnants. Winters are generally mild, but any snow or ice here is going to cripple the city. Another medium risk here, so research the emergency management site to get the best information.

There's a high risk here, with a robbery rate four times the national average. While it's not a "hide in your hotel room" kind of risk, you definitely need to have complete situational awareness and only visit the tourist attractions during the daytime.

The terrorists of the city actually live here, so there's a low risk of an actual terror attack. Criminals run rampant here, and a chain of events prevents the city from being able to control it. From low police staffing to jail overcrowding to criminals getting away with crimes because of those two aforementioned issues, there's a long way to go before Jackson will be safe.

There aren't any tourist-focused scams happening here, but there's a lot of poverty and panhandling going on. Basic utility issues can make people desperate to beg for help. Be on guard and avoid anyone who is begging you for money or help.

Women should treat this entire city, outside of the northeast area, with a high risk. In a sad case from 2021, a teenager was shot and killed on the day of her high school graduation at a gas station. Her boyfriend had been killed at another gas station just a few months before.

Sadly, this is another high risk. The tap water in Jackson isn't even useable as of the summer of 2022. Poor infrastructure, damaged pipes, and no funds to fix the problem have put the city on the defensive, and it's now so bad the EPA is coming in to troubleshoot and try to find solutions. Check the city's website before you visit to see what kind of boil orders are happening, and don't drink any water that looks clean without confirming the water is safe.

Safest Places to Visit in Jackson

The Mississippi Civil Rights Museum is the top draw in this community to learn about the civil rights struggle, success, and ongoing challenges throughout the state.

This emotional experience is good for children and adults and could be emotional sometimes, so take your time as you explore.

The Smith Robertson Museum & Cultural Center is ranked as a top spot to see in the 50 states by news powerhouse CNN.

The goal of the museum is “evoking a greater understanding of the African-American experience in the deep South.”

There’s plenty of African American art on display, and visitors will get a better grasp of what life was like for slaves in the South during the Civil War.

One of the most tragic moments in Jackson’s history was when Medgar Evans was assassinated outside his home in 1963.

Evans is a man who survived fighting the war in Vietnam, ranking as a sergeant when he was honorably discharged, but couldn’t survive his own front yard.

Even with a mortal gunshot wound, the hospital didn’t want to let him enter because he was black.

You can visit the museum, which is the home where Evans died, and hear more about his story, including why the gunman was never convicted.

Evans’ assassination paved the way for Civil Rights reform, and you can tour more historic places by following the Mississippi Freedom Trail, with a full list of locations on the tourism website for Jackson.

Check out MSBluesTrail.org to see a list of places to stop as you learn about the Mississippi history of Blues music.

Highland Village Shopping Center is the traditional American outdoor mall on the safe northeast side of the city.

You can visit some of the top retailers in the nation and also get a bite to eat at one of many restaurants.

For outlet mall shopping, the Outlets of Mississippi are just east of Jackson in Pearl, Mississippi.

This is in a lower crime area, but be extra cautious when carrying around a lot of bags.

Just across from the Smith Robertson Museum, stop by the Big Apple Inn for the pig’s ear sandwich delicacy that Jackson is famous for and see if you like this rare treat.

Each slider costs about $2, and you can eat as many as you want.

Be sure to visit one of the “Meat & Three” restaurants on the northeast side of the city (for safety purposes).

These restaurants offer one main meat serving and three choices of sides.

Places to Avoid in Jackson

Aside from the main tourist attractions, which you should visit during the daytime, avoid any other part of the city aside from the northeast corridor.

Most of the cities with the name “Heights” are considered very dangerous, including Colonial Heights, Woodville Heights, and Scotland Heights.

Maddoxroad, Skyline Drive, and Enochs Street/Hyde Park are other areas to avoid.

The bottom line is to avoid anywhere that isn’t on a tourist route and try to avoid the downtown hotels if you can.

Stay out of the local neighborhoods and even avoid the main roads in the west, south, and northern parts of the city – especially at night.

Try to avoid carrying any kind of purse or backpack that can be seen with the naked eye.

You want to draw as little attention to yourself as necessary and don’t wear flashy jewelry or clothing like the signature red-heeled Louboutin’s.

Safety Tips for Traveling to Jackson

So... How Safe Is Jackson Really?

I’m not one to be sensational about crime levels in a city, and I genuinely try to give every city its fair shake when it comes to the statistics versus the reality of crime.

The bottom line is – Jackson and most of its neighborhoods are not safe.

Social media forums go as far as being bleak – stating that tourists shouldn’t even go downtown.

Others will rush to its defense, saying it’s dangerous, but only in parts of the city where a tourist would never set foot.

“It will take all of us working together, city, county, state and federal leaders, civic leaders, and the community itself, to successfully root out the scourge of violent crime in our city,” Mayor Chokwe Antar Lumumba said.

Even in 2022, the city is on track to shatter more violent crime records, which in a city with so much crime history, is saying a lot.

The majority of the crimes are among people who know each other, but there is little to no concern for an innocent bystander being caught in the crossfire.

The Mississippi Mudbug Festival was cut short in 2022 when two teenagers reportedly fired more than 100 rounds into the crowds.

One teenager died, and five more people were hurt in the mass shooting.

The people of Jackson have had a tough time, being burdened by bad infrastructure that keeps failing, and no efforts are being made to fix it.

With a poverty level near 25% and a community that has been systemically underserved, it’s no surprise these aren’t the safest streets.

For weeks in 2022, the residents couldn’t even get clean water.

Jackson is really not a place to visit unless you’re driving through town to see some of the major historical sites, and you’re safer to stay the night in a city that isn’t Jackson.

If you do stay for a long period of time, avoid the downtown hotels and the ones near the fairgrounds and coliseum.

The northeast side of town is the safest place to stay.

How Does Jackson Compare?