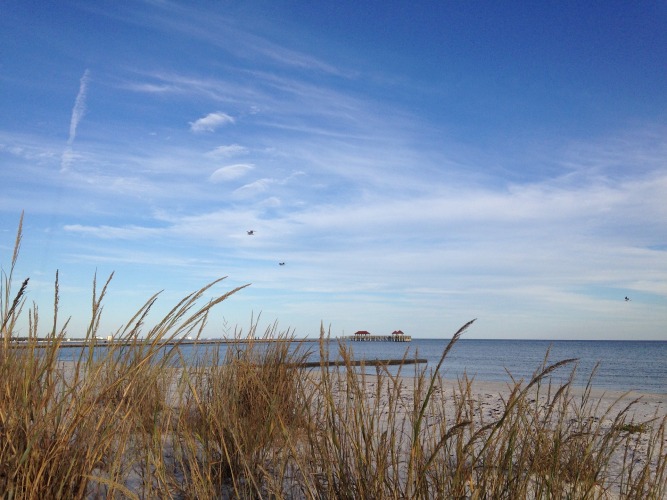 Gulfport, Mississippi, lies on a stretch of beach known as “The Secret Coast” since it isn’t as well known as other Gulf of Mexico destinations.

However, it appears the secret is out because more than 6 million people visited this area in 2019.

From ships to the sandy beaches to seafood to shopping to slot machines—you might need an extra day or two in Gulfport.

There’s a military presence here, as the home of the Naval Construction Battalion Center Gulfport where the Atlantic Fleet Seabees are headquartered.

Seabees are the builders of the military world and can build anything anywhere, like the Navy research center at the South Pole.

The city is split by the I-10 corridor and many of the tourist activities are south of I-10.

This area has a dynamic Mardi Gras celebration that easily rivals New Orleans.

The Gulf waters are calmer than other places thanks to a string of barrier islands that slows down the flow.

There’s just a little bit of something for everyone in Gulfport, Mississippi.

There's a medium risk in Gulfport. Gulfport has a poverty rate above 26%. Beyond the glitz of the casino lights and the fresh seafood, there's an underbelly to this town that tourists need to be aware of when traveling. Property crime is very high compared to national averages and theft is higher too.

There are taxis waiting at the casinos and airport. Rideshares are available any time of day. All of the forms of transportation are regulated. There's low risk when taking a ride, but having a car is a good idea since some of the activities along The Secret Coast are spread out over the 62 miles of shoreline.

There's a 1 in 30 chance of being a victim of theft, but diving deeper into the crime data from Gulfport Police, there were just six pickpocketing or purse-snatching incidents in 2020. We're still saying there's a medium risk just because the chance of theft is so high.

Gulfport can get the nasty side or a direct hit from a hurricane between June and November, so there's a medium risk just so you'll keep your guard up. This area can get severe thunderstorms and tornadoes as well. Allow me liberty here as a writer—I spent a sunny day in Biloxi outlet shopping, as outlet malls are my mothership. As I packed up my newly purchased items, I saw a small storm brewing just on the other side of the mall. As I looked closer, I noticed a funnel cloud. Someone asked me what I was looking at and I was a little scared to say, "Oh nothing, just the beginning of a tornado." It was short-lived and never touched the ground, but it shows just how quickly these storms can toughen up.

The robbery rates were about the same as the national average in 2020. Looking at the previous non-pandemic years, the robbery rates were a third or twice as high. We're going to put a medium risk on this just because of the overall crime rates, the casino areas where people carry a lot of money, and the general tourist vulnerability of this area.

There's a medium risk here, as there is with any location that has a military presence. The port in Gulfport is also a major shipping channel with a 16-mile distance to international shipping lanes, which could be another terrorist target.

There's a medium risk of scams here with rental scams being the biggest concern. Make sure any rental company has a license from the city to rent their location out. Don't ever wire money ahead of time. Most other scams reported in the area target locals via phone or email. There were about 40 fraud and scam complaints in 2021 in Gulfport.

We'll give it a medium risk because of those crime rates. I have been a single female traveler to Gulfport and while I never felt in danger, there were some parts that kind of creeped me out. Stay in well-lit areas, because the dark areas are very dark. Also, stay near the shoreline. Aside from the outlet mall, there's not much of a reason to go too far inland. Go with a friend if you can.

According to the Harrison County Utility Authority in the latest tap water annual report, "We’re proud that your drinking water meets or exceeds all Federal and State requirements. We have learned through our monitoring and testing that some contaminants have been detected however the EPA has determined that your water IS SAFE at these levels." This means there's a low risk.

Safest Places to Visit in Gulfport

You want to stay near the tourist attractions while visiting Gulfport, and there are plenty.

The Island View Casino Resort is the only casino in the Gulfport stretch of The Secret Coast, but there are more in Biloxi.

This casino is just like any Las Vegas casino with slot machines and table games.

There is also the Beach View Casino section, which is 100% smoke-free.

Check out The District on the Alley for dining options and walls of street art.

You can also hop aboard a Ship Island Excursion for a two-hour round trip visit to Ship Island and Fort Massachusetts.

There’s also the Ocean Adventures Marine Park, where you can see sharks, stingrays, dolphins, and sea lions up close.

Places to Avoid in Gulfport

It’s good advice to just stay out of the neighborhoods in the Gulfport area if you don’t have a reason to be there.

In the 2020 Annual Crime Report presentation, the police addressed the crime rates in the community.

“Our violent crime is proportionate to a small subculture within our city and we have found ways to address those subcultures, which in turn has helped us to reduce crime,” said Gulfport Deputy Chief of Police Chris Ryle.

There are underserved and poverty-stricken parts of this community outside of the tourist corridor.

Stay in your tourist lane, and you should not have to worry about imminent crimes.

Safety Tips for Traveling to Gulfport

So... How Safe Is Gulfport Really?

Gulfport is one of those cities where you are safe in tourist corridors, but shouldn’t venture off the beaten path.

The poverty level is high in this town and the median wage is lower than the national average.

Plan your daily activities before you leave the hotel so you don’t get lost or have to ask a lot of questions.

There’s a one in 30 chance of being a theft victim, so keep your belongings close to you and only bring what you need.

Keep the rest in a locked safe in the hotel room.

The weather here can cause safety concerns, from flooding on the main roads to water quality impacts when flooding happens.

In a worst-case scenario, a hurricane could cripple utilities in the community and shut down major roads.

If a hurricane is approaching, go further inland for the rest of your trip.

How Does Gulfport Compare?