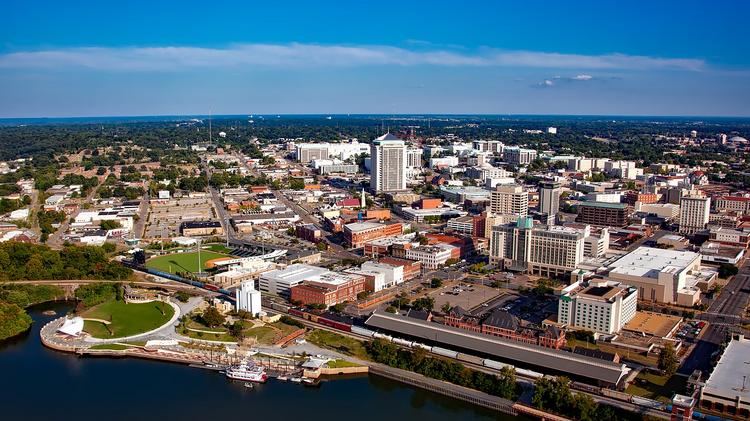 Montgomery, Alabama, is the state capital and a cradle of history for the state of Alabama and the South.

Everything about this city exudes Southern hospitality, from the food to the live music to the historical sites to the growing community that isn’t too set in its ways to see the future.

It was here that Civil Rights Activist Rosa Parks famously refused to give up her to move to the “colored” section of a bus.

That set off a Civil Rights firestorm with Montgomery dead center at the right for equal rights among white and black people.

The Alabama River weaves through the northwest side of the city, offering opportunities to ride a riverboat and enjoy live music while soaking in the thick Southern air and smell of magnolias as you cruise along.

I’ve taken this boat ride before, and if you see Riverboat Dan playing music, tell him I said hello.

Exploring this city is like bumping into different eras at every corner.

You can be in a world-class spa one moment, at the Rosa Parks Museum an hour later, and in Old Town Alabama, among landmarks dating back to the 19th century.

Montgomery comes with low risk, but that risk can change exponentially between different neighborhoods or parts of town. In 2020, the city had below-average violent crime rates, but through 2021 and 2022, those rates skyrocketed. It is one of the safer cities to visit in Alabama.

The public transportation system experienced major delays in 2022, and a fix for the problem is still pending. It's best to avoid that route unless you want to risk waiting an hour or more for a bus. Rideshares and taxis are available, as are rental cars.

Unless you're in one of the crowded spaces for a festival or crowded restaurant, you have a low risk of being pickpocketed. You should still carry only the bare necessities. I've walked around downtown Montgomery after dark, but it's apparent where the well-lit, welcoming areas are and where you should avoid them as you explore.

There's a medium risk because of the challenges you can face throughout the year. Severe thunderstorms and dangerous tornadoes are possible starting in spring, and hurricane season can bring remnants of a tropical storm up the Alabama spine. I was in Montgomery when Tropical Storm Nate swept over in 2017. It wasn't a bad storm, but it was quite rainy and windy for several hours on end.

There's a growing risk of robberies in 2022 due to the influx of violent crime. While most crimes are between people who know each other, it's smart to stay out of the areas that aren't along main roads and are well-lit. One thing I noticed about Montgomery is that there's excellent street lighting, or you're in the dark. There isn't much in the middle.

There's a low risk here, even with it being a state capital. It's a medium-sized, if not small, city with just under 230,000 people, and it's surrounded by small-town Alabama for miles.

Most fraud cases here involved residents getting IRS, utility, or fake police officer calls. You shouldn't have to worry about tourist scams, but you will likely get panhandled downtown.

There's a low risk for women here, but it will require using common sense and situational awareness. For example, I went there as a 40-something-year-old woman in 2017 and 2019. I was alone and had my own car. I felt safe downtown in the parking garages and main roads, but when I went to get some necessities, I had to pass two stores that didn't seem safe, even with a tropical storm approaching. There were neighborhoods off main parkways that were clearly not meant for visitors. You just have to trust your gut.

The 2022 Water Quality Report shows full compliance and no violation, with a great statement from the utility company, "During 2021, all of Montgomery Water Works’ water and wastewater plants were recognized for the excellence of operation. These awards demonstrate our continued commitment and dedication to provide the best possible water and wastewater service to you."

Safest Places to Visit in Montgomery

Visitmontgomery.com is the official tourism website for the city.

While it’s not the most robust tourism website I’ve seen, it does cover the basic attractions and gives specifics for categories like “family-friendly,” “girlfriends getaway,” and “golf lovers.”

The Civil Rights History here is not to be missed.

You have so many options to explore:

The Hank Williams Museum celebrates the father of contemporary country music with recordings, photos, and exhibits of Williams’ life in Montgomery and beyond.

If you aren’t humming, “There’s a tear in my beer cause I’m crying for you dear,” when you leave, you didn’t stay long enough.

The Mongomery Zoo offers a lot to see and do for adults and children.

With a new sloth and snow leopard exhibit, you’ll be able to explore many global habitats from the comfort of central Alabama.

You can pay extra for animal encounters like feeding a giraffe or watching an elephant make you a homemade souvenir.

Old Alabama Town is a series of historical buildings preserved to showcase life here going back to the late 1800s.

Tours are self-guided, and pets are welcome.

You can also schedule a guided tour.

The Harriott II is a riverboat that can take you for a dinner cruise or sunset ride up and down the river.

If you’re celebrating a special occasion, look for the anniversary or birthday package.

You can also check the schedule for Riverside Park events, which is right by the riverboat launch.

This park along the river is home to festivals and concerts throughout the year.

Normally, I’d tell you to avoid alleys in any city, but The Alley in Montgomery is a fun place with string lights hanging from open-air restaurants and shops.

It’s fun both day and night and in a safe part of downtown.

Places to Avoid in Montgomery

Outside of the immediate downtown area with all the attractions and hotels, you’ll want to use extra caution if you go south, west, or due north.

The further east you go, the safer it gets.

Nearby Prattville is a very safe suburb.

I’ve stayed in that city before, and let me tell you – if you love golfing, that’s the place to be.

Robert Trent Jones golf courses are among the best in the nation.

If you head east on the Atlanta Highway, you’ll be in a safe part of town and run into a bunch of stores, restaurants, strip malls, and churches.

I’m a confident driver in any neighborhood across the country.

I love road trips, and I’ve seen a lot of places.

Let me tell you – the streets in Montgomery neighborhoods are some of the narrowest I’ve ever seen.

I found myself doing the shoulder hunch, seemingly as a way to make me smaller to fit my car in the roadway.

Avoid losing focus on any of the neighborhood roads.

They are narrow, curvy, and not always well-lit at all.

Montgomery neighborhoods can also be hit or miss.

I was driving to a friend’s house, and I was creeped out a little in one neighborhood and had some cat callers making me nervous.

I wondered why my friend lived in this neighborhood.

Two blocks later, I was among the plantation-style homes of the upper class.

Safety Tips for Traveling to Montgomery

So... How Safe Is Montgomery Really?

When I first started researching the last official crime numbers for Montgomery, which was 2020, I was impressed at the low rates across the board.

One of the positive notes for a tourist is that these crimes are likely among people who know each other, leaving the real risk of simply being at the wrong place at the wrong time.

“The majority of the folks committing crimes in the city of Montgomery is a very small amount of folks that we’ve seen before, folks who have criminal records, folks who are trying to make and take control of the city, and we will not have it, and we will not allow it,” said Montgomery Police Chief Daryl Albert to local news station WSFA.

Another issue is the influx of narcotics into the community, which leads to more violent crimes.

Police are steadily making arrests, and convictions are being upheld, but whether or not it’s enough to slow down the violent crime increase remains to be seen.

You’ll instantly know when you’re in the bad part of Montgomery.

I even had someone say to me at a stoplight, “Lady, what are you doing in this neighborhood?

GET OUT OF HERE.”

If you stick to the main areas designed for sightseeing and entertainment, you shouldn’t notice much of a risk at all.

Make sure you have a working GPS and your phone is charged because getting lost is hard to navigate out of with just your sense of direction.

How Does Montgomery Compare?