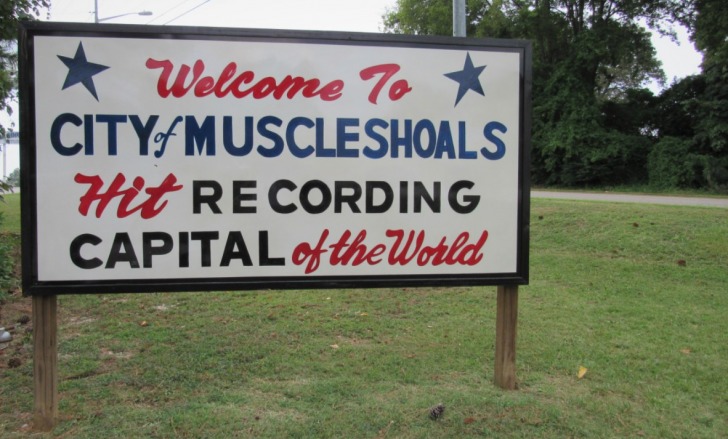 Muscle Shoals, Alabama, is a small town with a big heart and an influence on the music you might not even realize.

It was at one time poised to be a large city funded by none other than auto tycoon Henry Ford.

That led hundreds of people to buy land, sight unseen, based on the financial prowess of Mr. Ford.

The deal never happened and Ford moved on.

There was community disappointment, but soon to come there would be something that was music to everyone’s ears.

In 1960, FAME recording studio came to life with the hit song “You Better Move On” by Arthur Alexander and would hit a high note again when Jimmy Hughes sang “Steal Away.”

FAME quickly became the place for song artists to shake up the status quo and still, to this day, brings in artists like Alicia Keys and Demi Lovato.

The house band was known as “The Swampers” and their legend lives on throughout Muscle Shoals.

Muscle Shoals is part of a larger area known as “The Shoals” and includes:

The Shoals is in northwestern Alabama, the same television market (DMA) as Huntsville, and the Rocket City is just 90 minutes west.

There's a low overall risk here. This is a small town where some people don't lock their homes at night and you say hello to everyone on the street, maybe ask how their momma is going. Southern-style and class reign here and the crime statistics are low too.

There isn't a public transportation system here and the area is pretty spread out, so a car rental is a good idea. You can get a taxi and rideshare too. It's a low risk however you travel.

There's a low risk here and just one pickpocket was reported in 2020. People here are a little too nice to pick your pocket, but they'll pick your brain in a long conversation, as southerners love to ask questions.

Muscle Shoals is on a stretch of land known as "Dixie Alley", meaning it's ripe for tornadoes. Dozens of tornadoes have hit over the years, so that's the biggest risk year-round. The city also gets snow occasionally and those storms can bring a layer of ice at times. Severe thunderstorms and tornadoes are the biggest risks and it's a medium risk, especially in spring and late fall.

There were no robberies at all in Muscle Shoals in 2020. That means there's the lowest risk possible, right?

There's a low risk of terrorism in The Shoals. Huntsville has some high-profile targets, but that's a good 90 minutes away from this part of Alabama.

The typical scams are reported here, like someone claiming to be a police officer and demanding money or you'll be arrested. However, this scam happens to local people and you won't be affected by it as a tourist. There's a low risk of a tourist getting scammed.

The Shoals are safe for women. The biggest danger is the darker roads between cities, but there's no big risk of crime, even walking around the downtown area at night. I'd still avoid going into neighborhoods you don't know.

The 2020 Annual Water Quality Report shows the water is safe and meets or exceeds all standards. There's low risk when using it.

You simply must visit FAME Studios.

There are new “backstage” tours that have never been available before.

I promise if you don’t realize the importance of this music studio now, you’ll be baffled at the impact it has on some of your favorite songs over the years or how many songs made here are being remade by current artists.

To get more into the history of music in all of Alabama, visit the Alabama Music Hall of Fame in Tuscumbia.

I visited here a few years ago and was amazed at the Alabama connections to music, and while this tour just takes an hour or two, it’s loaded with a lot of great artifacts of music from the past century.

W.C. Handy, the musical genius, was born in Florence, Alabama, which is part of The Shoals.

His childhood home stands as a historical marker and is open for tours.

The Wilson Lock and Dam is an engineering marvel right on the Tennessee River.

It’s hit or miss if the visitor’s center is open, but there are plenty of places to park and take pictures or view the dam.

The waterfall is really cool to see.

While you’re at the river, check out Joe Wheeler State Park.

It’s a little confusing when you first look for it, as it sits on both sides of the Tennessee River.

You can hike, fish, swim, or camp here.

One of the hidden treasures in Tuscumbia is the Rattlesnake Saloon.

It’s under a rock overhang and has some of the best burgers you’ll get in Alabama.

Get there early as food stops being served at 9 pm.

As I’m writing this my mouth is watering thinking of the meal I had at Champy’s World Famous Fried Chicken in Muscle Shoals.

The servings are huge too.

Downtown Florence is a beautiful area with that small-town charm sprinkled with a little bit of a modern touch.

It’s more like boutiques and jewelry stores instead of mom-and-pop souvenir shops.

This part of the state is a great place to go antique shopping too.

Places to Avoid in Muscle Shoals

Just west of the airport is the only place where the crime maps light up with crime numbers.

Again, the crime here is very low, so there aren’t bad neighborhoods here.

I’m a self-proclaimed city girl and I moved to Alabama for a job.

The first time I was out in The Shoals I couldn’t believe how spread out it was.

There are a lot of little cities that make up this region.

Muscle Shoals is the largest city with just 13,000 people.

If you can accept that you have to drive (or bike) a little bit more to get from place to place, you’ll adapt quickly.

There’s a lot to be seen but you’re going to put some miles on your car to see it.

This is a series of small southern towns where they speak and move in a Southern manner.

That means they might speak and move a little slower than you’re used to.

Most people have an accent, and if you aren’t Southern there’s a good chance you’ll be called a “Yankee” now and then.

Respect Southern pride and don’t do silly things like asking people to talk so you can hear their accent.

So... How Safe Is Muscle Shoals Really?

The long drive from Huntsville with rolling hills and beautiful woods.

The small town shops spread out with amazing drivers over a historic dam.

Restaurants with some of the biggest servings of food you’ll ever see get you ready for a hike into the woods.

To punctuate that point, let’s look at crime numbers from 2020:

20 of those thefts were shoplifting.

There have been four homicides in the past decade.

I reckon the police here might get downright bored.

How Does Muscle Shoals Compare?