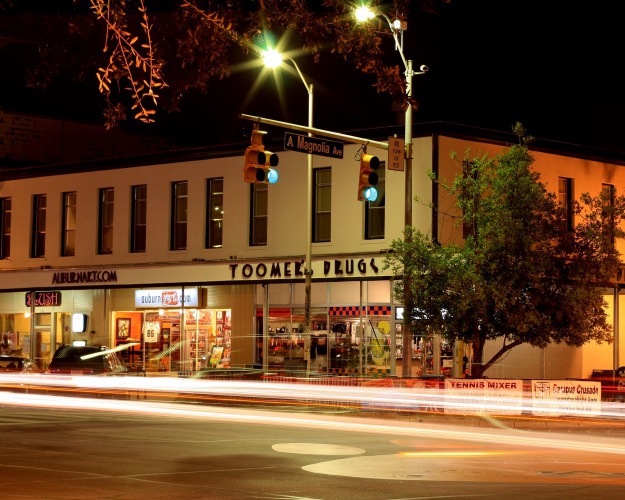 If you’re ever in Auburn, Alabama, and find yourself at a loss for words, just yell out “WAR EAGLE!” and dozens of people will say the same thing in return and cheer you.

That’s because this historic city is the home of Auburn University, one of the “Top 50 Public Schools” (#43), according to U.S. News & World Report.

Auburn and Opelika (“ohh-puh-LIKE-uh”) are right next to each other and are considered part of the same metro area.

If you’re coming here to visit Auburn University or do a campus tour, you’ve got a lot of places to see and things to do.

Non-university visitors might be craving a little more than a college town, to be honest.

There is a historic downtown, but it’s not that big or boisterous.

There are great Southern (fried) foods, but Vegans are going to have trouble finding a meal here.

Everyone enjoys the great outdoors here when the weather allows.

There are also plenty of bigger cities within easy driving distance, like Atlanta or Montgomery.

Golf is very popular in the south and if you can get a tee time at the Robert Trent Jones Golf Course in Opelika, take it!

It’s one of the standards of excellence brands in Alabama.

The overall risk is low. Crime rates are low and people are friendly. That Southern charm you've heard about is dominant here. The tea is sweet and the people are sweeter.

There's not a traditional bus system here in the city, but the university does have Tiger Transit. You can get taxis and rideshares too. While it's best to have a car to get around, you won't have anything but a low risk of using the other options.

There was just one pickpocket reported valued at $250 in 2020. That's a low risk, but if you're here on game day you should be extra secure with your belongings. I tried to find the pickpocket numbers from Auburn University's annual crime report, but they listed every OTHER crime except larceny/theft.

You have to be educated about tornadoes if you're going to visit Auburn, especially if you're there spring through fall. For example, in 2019, a powerful EF-4 tornado moved through Lee County (where Auburn is located) and killed 23 people. Many were pulled right from their homes by the tornado. You need to know when the weather is risky, what to do when a storm gets severe, and where to go in a tornado long before the sirens go off. There's a medium risk this could happen any time of year.

There's a low risk of mugging. Of the 59 robberies that happened, 51 of them were inside a residence, not in public or at a business.

Auburn isn't safe from the Crimson Tide of Alabama, but it sure is safe against terrorism. There are no hard targets in this area and the closest risk would be Fort Benning, more than an hour east in Georgia.

There are some campus scams to worry about focusing on housing. There are resident scams about fake past due bills demanding payment. As a tourist, you have a low risk here.

This is the South and women are treated like royalty here. While you should watch how much you drink and resist the urge to meet someone from the internet at a private place, if you're practicing good safety manners, you'll be safe here.

Auburn's water is safe to use and passes all state and federal requirements, according to the 2020 Water Quality Report.

Safest Places to Visit in Auburn

Downtown Auburn is like stepping back into the 1960s with the facades and signs reminders of an era gone by.

This is a great town for foodies as long as you don’t have too many dietary restrictions and it’s not filled with the familiar restaurants you’re used to back home.

Auburn University is a regal-looking institution and definitely worth meandering through the campus.

You’ll find a modern art museum and arboretum on campus.

Be sure to get an Instagram photo at Toomer’s Corner at College Street and Magnolia Avenue.

This is an Auburn icon.

In North Auburn, there is Kreher Preserve & Nature Center with seven natural habitats to explore.

You can see wildflowers, butterflies, and a waterfall, just to name a few.

The most popular outdoor space is in south Auburn.

Chewacla State Park has fishing, kayak launches, boating options, and even a beach.

You might even see some deer running through the woods.

Geocaching is popular here as well.

Places to Avoid in Auburn

Crime maps show that northeast and southwest Auburn have the highest crime rates, but that’s also in a city that has a violent crime rate half the national average and nearly 30% lower than the state average.

You should avoid saying “ROLL TIDE” too loudly here.

Just kidding, the Alabama/Auburn rivalry is a friendly one, but if you don’t have a dog in the fight, just keep saying “WAR EAGLE!”

People in Auburn speak with a thick Southern accent.

If you don’t, you might be called a Yankee, but don’t get offended.

I’ve lived in Tennessee and Alabama and I’ve been called “Yankee” dozens of times even though I’m from Missouri.

Avoid any argument about the Civil War.

I have an ex who was Southern and every time the topic came up, his argument of how the Civil War wasn’t about slavery, it was about states’ rights came up and went on all night.

Avoid trying to eat healthily here all the time, as it’s going to be hard to do.

Splurge a little if your doctor is okay with it. You’ll get some of the best fried chicken you can imagine and modern takes on Southern dining.

Also, if you’re drinking tea, avoid asking for tea without sugar unless you want some very odd looks.

It will guarantee a “Where are you from?” if you do.

Sweet tea here is more like drinking sugar with a little bit of tea.

Learn some of the Southern lingoes.

Safety Tips for Traveling to Auburn

So... How Safe Is Auburn Really?

Both violent crimes and property crimes are lower here than national and state averages.

This is one of the safer cities in Alabama by all accounts.

Here’s how the risk of being a crime victim breaks down:

It’s a city of Southern charm and history.

It’s a college town, so you might be the oldest person at any bar if you’re not in school.

I would guess there are probably some people here who sleep with doors unlocked (but don’t do that!)

How Does Auburn Compare?