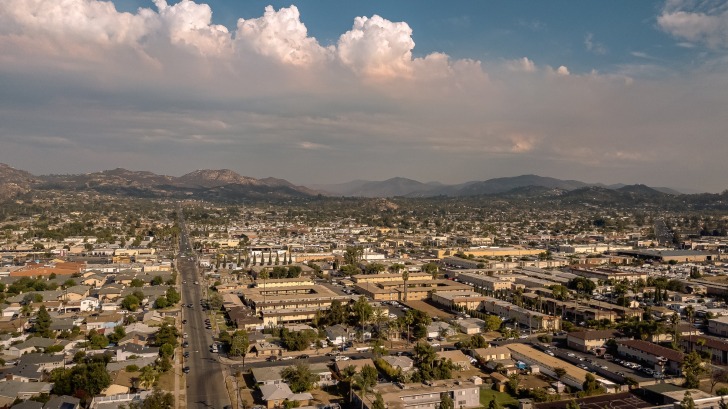 El Cajon, California, AKA “The Box”, is east of the San Diego downtown area and nestled in a Southern California valley.

This is a vibrant, diverse community that lacks any beachfront property but makes up for it with more affordable options and invigorating nightlife.

Pronounced “El Cuh-HOWN”, the city hosts an annual America on Main Street celebration for the diversity of its community and the American Dream.

This is the hometown of NASCAR champ Jimmie Johnson and also home to one of the biggest parades in the San Diego area each Thanksgiving weekend with the Mother Goose Parade.

I-8 splits the city through the center, giving easy access to other Southern California destinations.

While El Cajon literally translates from Spanish to mean “The Box”, the name comes from the box-shaped valley that surrounds the city.

This will be an important point as we move on with the safety advice for visiting the city.

There's a low overall risk in El Cajon. This is a city of 106,000 people who make an average of $20,000 less than the California norm. It's a more affordable option to live in while giving travelers a welcome discount from those beachfront budget breakers.

The Metropolitan Transit System (MTS) is the best way to get around the area by bus. Routes go throughout El Cajon and into the greater San Diego area. There are regulated taxis and rideshares available too. A rental car would be a good idea to get the most out of a visit to El Cajon, but whatever you choose there's low risk.

Ten pickpockets and purse snatchings were reported in 2020. That's a low risk. Of the 1203 thefts that happened, the majority were from vehicles or shoplifting.

The biggest disaster that could happen in El Cajon is a major earthquake, which is possible at some point, but not likely day-to-day. Immediate concerns come with extreme heat and flash flooding. Overall, there's a low risk, but there could be major natural disasters that happen, so just be aware of basic safety for those events.

I went back a couple of years on statistics for this one, because 2020 (the latest year FBI data is available) was very low, which suggested to me that it was pandemic-related. Sure enough, highway robberies were higher in previous years. Robberies peaked in 2019 with 201 robberies and almost half of them were highway robberies. Out of an abundance of caution, and to remind you to never fight with your life for your stuff, we'll give this a medium risk.

Large population areas, especially one like San Diego with a big military presence, are always going to be a medium risk.

There are no reported scams on the Better Business Bureau website for El Cajon that give pause to a tourist, and local news reports show scams mostly target locals. That's a low risk.

Rape reports have been trending down in the past 5 years, with 33 reported in 2020. Women should have a low risk here, but you've got to follow basic safety protocol to stay safe.

One of the biggest fights over tap water in California is always going to be having enough of it as the "Water Wars" wage on. The water that is available in El Cajon meets all necessary requirements and has a low risk.

Check out what’s going on at The Magnolia performing arts center when you visit, as this is the central entertainment venue for El Cajon.

The Knox House Museum was a popular hotel in the 1870s and still stands for tours.

The Olaf Wieghorst Museum and Western Heritage Center celebrate the art of the old west through the eyes of an artist who called El Cajon home for 44 years.

Put on your aviator glasses and visit the El Cajon annex of the Air & Space Museum on the north side of town.

You can see aircraft from years gone by on a walking tour.

Check out the Sycuan Casino Resort.

There are slots, table games, and bingo waiting for big winners.

You can also play golf here or just enjoy a day at the spa.

This is a great way to get that Las Vegas feel without driving to Nevada.

While this is a beautiful body of water surrounded by mountains, you can’t swim or boat here.

I asked the same thing.

It’s because this reservoir supplies drinking water to the region, so minimal body contact is required.

You are allowed to fish and kayak, but no standup paddleboards (SUP).

You can also be beachside in San Diego within 30 minutes (plan extra time for traffic during rush hours).

Places to Avoid in El Cajon

As with most cities with a major interstate running through it, the neighborhoods along the I-8 corridor have the most crime reports according to crime maps based on 2020 data.

The El Cajon Police Department does have updated real-time crime maps on its website, so you should check your hotel or neighborhood rental before booking.

If El Cajon is “The Box”, then locals tell me it’s smart to stay on the outside of the box and avoid the center.

At least, be more cautious when going to the center of the box.

The center of town is Magnolia and Main Street, and some of the places I just told you to go to are in this area.

It’s normal for a downtown area to have more crime.

You should just avoid wandering off the business path and into neighborhoods you don’t have any business in being in any way.

So... How Safe Is El Cajon Really?

The most concerning crime statistic I saw was the number of highway robberies, which is “a robbery committed on or near a public highway usually against travelers.”

With an average of 200 robberies a year and almost half those being highway robberies, that’s enough to make you think.

The violent crime rate is lower than the California average with a 1 in 206 chance of being a victim.

The reality is, El Cajon isn’t as affluent as some of its neighboring cities.

It’s a working-class community with 20% of people living in poverty.

There’s going to be more drug and gang activity here than you might like in a vacation getaway, but you also generally won’t see that underbelly unless you go to a bad neighborhood, and that can be hit or miss throughout El Cajon.

Always go with your gut and stay on the main roads.

How Does El Cajon Compare?