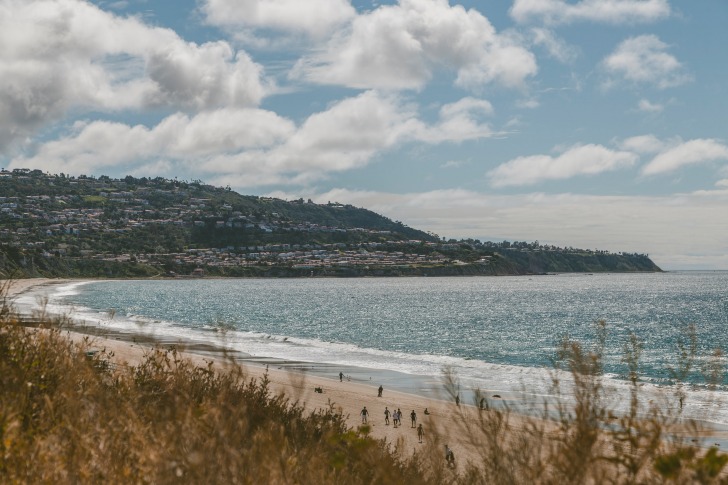 Redondo Beach, California, brings the best of beach life close to city life with a wide variety of activities and a unique pier you won’t find in many beachfront communities.

You can eat your way through the world on the Redondo Beach Boardwalk, with a special tip of the hat to a variety of Korean food.

Just glancing at a few pictures, I can smell the churritos in the air and the fresh seafood sizzling on a grill.

Redondo Beach has just enough fun for singles to enjoy a trip here but isn’t wild enough to scare off family vacationers either.

You can bike along The Strand, which stretches to Santa Monica.

Maybe join a game, a beach volleyball or build a sandcastle beachside.

There are also a lot of rental activities on the water.

Art fans will love to stroll through the galleries and displays throughout the community.

There's a low risk in Redondo Beach. The city has low crime rates and high amounts of safe fun. Its central location makes it a great place to safely rest your head at night to the sound of the ocean while still being able to explore the city dwellers among you.

Beach Cities Transit (BCT) is the bus system to get around several nearby beach communities and Los Angeles International Airport. Cabs and rideshares are also available and riding a bike is a popular way to get around too. All rides come with low risk.

Just five pickpockets or purse snatching were reported in 2020, with only $10 total being stolen. That shows people in this community are smart about not leaving their valuables lying around. You should follow suit and the numbers can keep staying that low.

Not to create gloom over such a beautiful beach city, but tsunamis, earthquakes, flooding, severe storms, and El Nino weather patterns are the big concerns here at Redondo Beach. While most days are going to be sunny and warm, these disasters can cause major damage, so that gives it a medium risk. The emergency management division of the city is well-prepared for the worst-case scenarios and has guides you can learn from as well.

There's a low risk of being mugged here. The robbery rate is just below the national average. Car break-ins are more common than muggings.

There's a medium risk just because Redondo Beach is part of a massive metropolitan area with a lot of tourist attractions, that unfortunately, also attract terrorists. Homeland security realizes this risk and has all kinds of safety steps in place to keep the community safe.

There's a low risk of being scammed as none of the recent reports involve any scams against tourists. There was a woman accused of paying for Girl Scout cookies with fake $100 bills. That was very upsetting to me, but it shows how conniving some people can be, so don't ever trust anyone who hasn't earned the trust and if something seems too good to be true, walk away.

Women should be safe here, as long as they practice basic personal safety. Yes, it's a beach town, but it's also not the quaint areas like some of the Orange County beaches. There are a lot of people getting physically fit in this community, so just be careful who you share personal information with or how distracted you become when wearing earbuds or looking at your mobile device.

The 2020 Water Quality Report from Calwater shows the utility was in compliance with all tap water tested. The bigger concern is water conservation in this area due to an ongoing statewide drought. You should check for any water restrictions before you visit Redondo Beach.

The Redondo Beach Pier has gone through several iterations over the years, but is now what’s called an “endless pier.”

The design is more of a triangle than a straight pier going out over the way, so there’s no real beginning or end to the pier and it’s dotted with stores, restaurants, and tour guides.

The boardwalk nearby also has some dining options from several different countries and more shopping.

Eat your heart out here because you’ve got plenty of ways to burn those calories.

The Strand is a popular walking, jogging, and biking trail that goes through Hermosa and Manhatten beaches before turning around in Santa Monica.

At the Redondo Bay Marina, you can charter a boat, book a fishing excursion, rent a paddleboard, or just marvel at the boats in port.

I always get boat envy when I walk around marinas, then I think of the costs of the boat and maintenance, and realize I’m much better off with just charters until I become a billionaire.

While others get distracted by the beach, they might miss some of the finer points of visiting Redondo Beach.

Stop by Heritage Court for a stroll through a rose garden and a look at life back in the early 1900s.

Places to Avoid in Redondo Beach

The north side of Redondo Beach is mostly residential, and unless you are renting a home, you won’t find a hotel in this area.

Most hotels are located up and down the Pacific Coast Highway.

That’s not to say you should avoid the north section, it’s just not going to be full of a lot of activities.

The one bonus is, on this side of town, you’re closer to freeway access.

Crime maps show that most criminal activity happens along the beachfront to the far north and south.

That’s not surprising because it’s where the largest number of tourists can be found.

With a violent crime rate half the national average, there’s still not an area with impending doom, even if the statistics are higher in a particular area.

You want to avoid doing any ocean activity you aren’t trained to do.

Surfing looks easy if you’ve never done it before, but there are particular safety issues you’ll learn about during a surf lesson or two.

Do not jump or drop into the water beneath the pier and don’t swim there from the beach.

Plus, people will be fishing off the pier and nothing ruins a vacation like a fish hook in the hand.

So... How Safe Is Redondo Beach Really?

As far as California beach towns go, it might be a little more dangerous, but not by much.

Redondo Beach is a community with a very lived-in look. It’s not pristine and prestigious.

It’s a city that isn’t afraid to show its wrinkles and celebrates its wear and tear, knowing all the fun that was lived along its hallowed boardwalks.

As I wrote this article I went through the weekly crime reports and ended up down a huge rabbit hole, but it’s always amazing to me how many people leave cars unlocked.

I don’t know what the weakness is in people who forget or don’t lock cars, but it’s not a hard endeavor to click a button.

If you’re going to be surfing or paddleboarding, make sure you find a place to lock up your personal belongings and don’t leave them in the car.

Hiding it under the seat is no good — thieves are smart enough to look there and they also know when a blanket is stretched out over the footspace that means there’s something to be taken.

How Does Redondo Beach Compare?