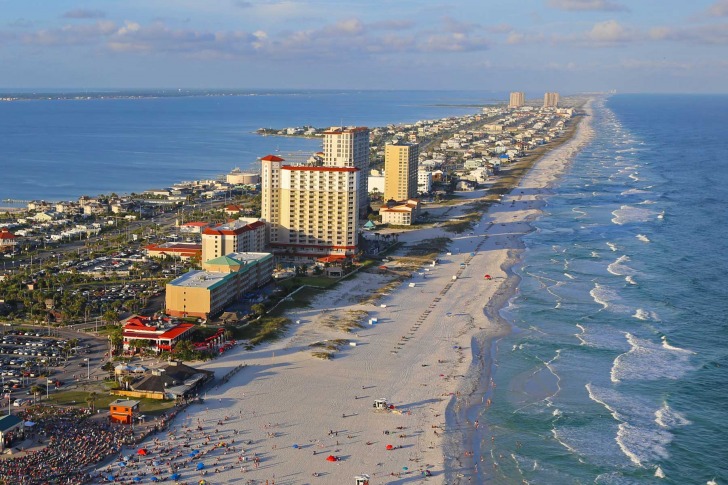 Pensacola is a city in the Florida panhandle with Pensacola Bay cradling the east and south sides, and it’s the last city you’ll go through heading to the separate area of Pensacola Beach.

Pensacola Beach is an unincorporated area and not part of the city of Pensacola, but we’ll touch on some safety considerations there as well.

The city is also near the state line of Alabama, which is just to the west.

That said, Pensacola is much more than a “drive-thru” city, bringing its own urban amenities and entertaining vibe.

The downtown area holds nearly three centuries of history and brings it all together in an educational, entertaining, and walkable location.

You also get a great cultural melting pot of activities, as Pensacola is known as the “City of Five Flags,” named for the different governments that have ruled here throughout history.

Military fans and veterans will want to get a look at the National Naval Aviation Museum, and there are strict rules for anyone trying to get on base at Naval Air Station Pensacola.

If you’re wondering whether Pensacola is “Florida” enough for you, I can tell you as someone who visited there several times and also lived in South Florida – Pensacola holds its own in every way possible.

There's a medium risk in Pensacola due to high violent crime rates and the transient traffic of tourism that can lead to petty crimes. There's no reason that should stop you from visiting the city, but you're off to a good start by reading articles like this one to help you safely plan a trip.

Pensacola is in Escambia County, which is where the Escambia County Area Transit (ECAT) name comes from. This is the traditional public transportation you'll find in any city. Taxis and rideshares are available to get around the city or to and from the beach. Pensacola Beach does have a trolley. If you get a rental car, make sure it comes with a SunPass, which is the toll payment method used for vehicles crossing into the barrier islands and other toll roads.

There's a medium risk here with a lot of tourists, especially in winter, and crowded events where pickpockets are looking for a crime of opportunity. Lower your risk by only carrying what you need. Carry wallets in front pockets or inside jacket pockets. Bring a small crossbody purse and leave behind any valuables or priceless items.

Pensacola faces a risk of hurricanes from June through November, like any city on the Gulf Coast. If a storm is approaching this region, rethink your travel plans. Pensacola has been hit hard by hurricanes and you don't want to be stuck in the middle of one. Severe thunderstorms and tornadoes can also happen throughout the year, making it a higher risk since a lot of people spend time outside here. There's a reason Florida is called the Lightning Capital of America.

The risk of a tourist being a robbery victim is low. Most of the robberies reported here were retaliatory in nature or among people who know each other. To reduce your risk even more, stay out of neighborhoods that aren't meant for tourists and avoid walking around at night.

With a Naval Air Station just to the west and Elgin Air Force Base just to the east, Pensacola is going to come with a medium risk but also a high level of security. There are strict rules about who can and can't get onto these bases and local police are vigilant in monitoring crowds and suspicious activity. You can help by reporting anything suspicious to the local police department. When in doubt, err on the side of overcommunicating with police.

Be wary of rental scams for housing. There's a trend in tourist locations where scammers will take or steal photos of a home and list it for rent. This usually happens on third-party websites. Once a tourist shows interest, the scammer demands money upfront - like a wire transfer - and offers an unusually good deal. When the tourist shows up, the home is owned by someone else and there's nowhere to stay. Avoid this scam by requiring proof of a rental permit, asking to speak to someone on the phone or a virtual meeting, and requesting a virtual tour inside the house. Any excuse to avoid doing those things should be a red flag. Use local travel agencies as reliable sources for rental availability.

Women have the same risk as men but should use extra caution when walking around at night. Stay in well-lit areas and the entertainment districts. Try to travel with a group or a friend. Don't drink alcohol to the point you can't make smart decisions.

The 2021 Water Quality Report shows no violations and full compliance. If you're visiting after or during a flood event or tropical weather, make sure you follow the city's social media sites because that's when boil orders are most likely to happen.

Safest Places to Visit in Pensacola

Visitpensacola.com is the official tourism website and there’s an app available so you’ll have all the verified information with you on the road.

Look for seasonal deals for hotels and restaurants, as this website updates them often.

Avoid third-party tourism sites that could be trying to scam your credit card or other personal information.

This area was founded in 1559, so whether you want to explore history or drink a hurricane, this is the place for you.

Historic Pensacola spans nearly nine acres and has dozens of buildings and museums to explore.

The tourism bureau offers a discount ticket if you want to see all the museums and get access to tours.

That includes the Pensacola History Museum and will get you caught up on your history lesson so you can appreciate the other attractions to explore.

The downtown is also full of shopping and dining throughout the day and night.

The brick-lined sidewalks make it as charming as it is fun.

Visit downtownpesacola.com to find out about events happening during your visit.

This is a common place for festivals and other holiday events.

For those who can access Naval Air Station Pensacola, you have several attractions to see:

Visitors to NAS Pensacola are generally limited to DoD ID cardholders, including active duty members, veterans, and family, veterans with a VHIC, and anyone sponsored through the Trusted Traveler program.

This sits between Pensacola and the Gulf of Mexico.

Due to damage from Hurricane Sally in 2020, repairs are ongoing.

Check the park website before you go to see if there are any restrictions or closures.

Tours of all kinds are available.

You can go on a fishing charter, foodie tour, swim with dolphins adventure, take a surfing lesson, parasail, or ride in a plane above the shore.

Be sure to review any paperwork before you sign it, as in most cases you’re waiving any liability the vendor has should there be an accident.

When you cross over the Pensacola Bay Bridge, you can either stop on Gulf Breeze, to see attractions like the Gulf Breeze Zoo, or keep driving to hit Pensacola Beach.

Once you’ve enjoyed that time, you can go west to see the Civil War battlefield remains at Fort Pickens Discovery Center.

If you go east, you’ll be at Gulf Islands National Seashore, with beautiful beaches untouched by any housing or retail establishments.

Places to Avoid in Pensacola

Pensacola is designed in a way that it’s clear where the entertainment areas are and where the neighborhoods are, and you shouldn’t go outside of the tourist attraction regions.

There’s a high violent crime rate here, but mostly due to crime among people who know each other.

You just don’t want to get caught in the wrong place at the wrong time.

Winters get crowded here as snowbirds from the north come for a winter respite, so expect larger crowds and higher prices for hotels.

It doesn’t mean you should avoid it, but it’s just good information to have.

Avoid the whole Gulf region if a hurricane is headed anywhere along the northern Gulf coast.

Those storms can change course day-to-day, and even a storm that looks like it might go east or west could shift toward Pensacola at the last minute.

Look up Pensacola and Pensacola Beach damage from hurricanes since 2015, and you’ll get a good idea of how bad they can be.

Safety Tips for Traveling to Pensacola

So... How Safe Is Pensacola Really?

The Pensacola Police Department isn’t very transparent with crime data and hasn’t released information for 2021 in the FBI’s required format.

What we do know is that the crime rates reported in 2020 compared to the population are well above average, and in some cases, exponentially higher.

The majority of crimes aren’t against tourists, but you can bet if you leave your car unlocked it’s going to be rifled through by a thief.

Just because you are on a waterfront vacation or business trip doesn’t mean you can let your guard down.

Just about anything you need at the beach can be rented and you should carry only the bare minimum with you.

Have someone stay with your stuff if you go in the water.

Wear sunscreen and re-apply it often.

Just because this is North Florida doesn’t mean the sun isn’t intense.

I once had a horrible sunburn on a rather cloudy day taking a boat cruise in this region.

Know how to escape a rip tide (there are signs everywhere in case you forget.)

Pensacola is really a gun town.

If you use common sense and situational awareness, you’ll enjoy the city of five flags too.

How Does Pensacola Compare?