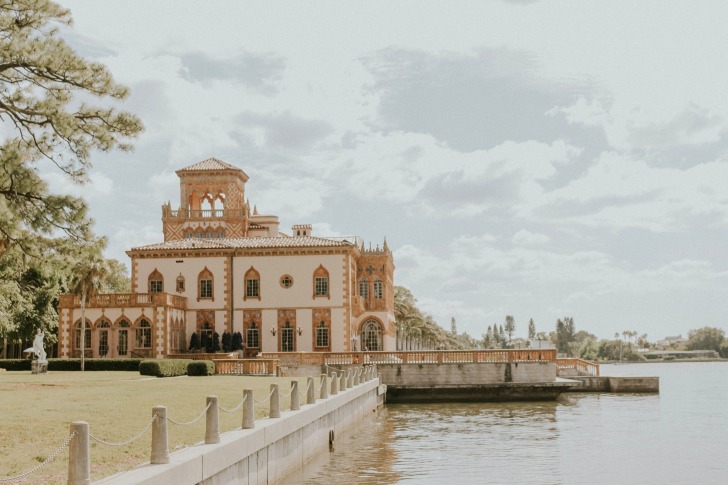 Sarasota sits on a stretch of western Florida known as the Suncoast.

This is a city of culture, cuisine, and carefree days at the beach.

The white sands of the Siesta Key Beach have earned a ranking as America’s Best Beach.

That’s just one of 14 beaches in this city by the water.

A few blocks inland and you are surrounded by high-class art, shopping sophistication, and entertainment galore.

The city of Sarasota picked up its artsy vibe from the Ringling family of Ringing Brothers Circus fame.

The Ringling Museum is a huge draw in this community, positioned right on the water.

Sarasota is known for its top rankings by U.S. News and World Report, including:

Once written off as a place where retired people go to enjoy their golden years, there’s a hip culture taking over, making room for retirees and younger generations to peacefully enjoy all the community offerings.

That’s when the snowbirds come down to live between November and April.

This is one of sophistication and class mixed with laid-back beaches and sunsets that will take your breath away.

There's a low overall risk, except when it comes to hurricane season—but even that comes with folklore we'll dive into later. This is a safe community with people dedicated to keeping it safe. It's a pristine slice of Florida life.

There's a low risk in public transportation, taxis, and rideshares here. All are governed at a city or state level. Just make sure you see a permit when getting into a cab. Be prepared for a potentially costly ride, as traffic in this area can be brutal. It does make sense to rent a car here, as there are so many unique areas in Sarasota and Sarasota County to explore.

There's a medium risk in Sarasota. Larceny made up for 64% of all reported crimes in Sarasota in 2020. This is a wealthy town and criminals know it. There's also a large homeless population throughout the downtown area. Keep your belongings close by and never leave a bag unattended.

Hurricane season runs from June - November, and Sarasota sits right on the water. Due to that, we're giving it a medium risk during the hurricane season and low risk from December - May. There's an urban legend you'll hear in Sarasota that it's protected from hurricanes due to a Native American blessing that was put on the area, making it immune to a direct hit. As Hurricane Irma, a strong Category 4, was headed right toward Sarasota Bay in 2018, I thought to myself "Well, I guess that puts an end to that theory." Then the storm changed paths right before it hit land. Sarasota was only hit by a Category 2 storm. Folklore aside, the positioning of Sarasota on the shoreline and the unique weather dynamics needed for it to get a direct hit is more likely the reason this area escapes the worst time and time again.

There's a low risk of mugging. In 2020, robberies made up just 3% of the total crimes in the area.

There aren't any hard targets in Sarasota, so there's a low risk. There is a strong Sarasota connection to the 9/11 terrorist attacks. First, President Bush was in Sarasota when he got the dreaded message. Second, it turns out three of the terrorists involved in 9/11 trained at a flight school in Sarasota County.

We're going to give this a medium risk simply because of the elderly and the retired population here. They've got a lot of money and might be easier to swindle. Sarasota Police do a great job of letting people know when scams are happening.

I'm a middle-aged woman who lived in Sarasota for 4 years and I never once felt unsafe. There's a low risk.

Sarasota County's drinking water meets and exceeds all state and national standards. There's a low risk here. The only concerns come when there is a spill or water quality issue from time to time, which is quickly addressed with a boil water order.

Safest Places to Visit in Sarasota

There are a lot of safe places to visit in this picturesque community.

The beaches of Sarasota County are legendary.

Siesta Beach is one of the top beaches in the nation each year.

The sand here is worth the trip as it’s made up of quartz.

This not only gives it a bright white appearance, but it also keeps cool even in the blistering Florida sun.

No burned feet at Siesta Beach!

The Marie Selby Gardens sits on Sarasota Bay and it’s a beautiful walk through a slice of Sarasota history surrounded by the beauty of Florida foliage.

The Ringling Museum is another must-see and is free on Mondays, so try to plan your trip around that.

Downtown Sarasota has it all. High-end and bargain shopping.

A global food experience with cuisine from just about every country.

Sarasota is quickly making a name for itself as a foodie destination.

The University Town Center (UTC) area has high-end shopping and dining in a suburban atmosphere.

Nearby Nathan Benderson Park is a great way to work off some of those calories.

It is also home to prestigious rowing events year-round.

Places to Avoid in Sarasota

There can be crime spikes in this area.

It’s also strongly patrolled by police officers and has a large community effort to curb the crime that does happen.

Should you avoid it for fear of your life?

Do you have a reason to go there as a tourist?

It is worth researching the history of Newtown and the strong influence the African American population played in making it a place you want to visit.

Some parts of downtown can seem overrun with homeless people.

Should you see one of these pockets of people, just go a different direction.

Along 10th Street near Orange Street, you’ll see a large group of homeless as this is where The Salvation Army is located.

Safety Tips for Traveling to Sarasota

So... How Safe Is Sarasota Really?

You are going to have a hard time finding a safer community to visit by statistics and by reference.

It’s ranked so high in places to live, safe places, places to retire, etc., and those reports tell the true story.

There are some places in the northern part of the Suncoast region, like Bradenton, that can get a little more sketchy, but in Sarasota proper, you should feel safe at every turn.

The only place to avoid if you don’t have a reason to be there is Newtown.

Most of the crimes reported there aren’t even against tourists, it’s domestic issues.

The Sarasota Police have a strong presence throughout the community and where the Sarasota city lines end, the Sarasota County Sheriff picks up patrols.

How Does Sarasota Compare?