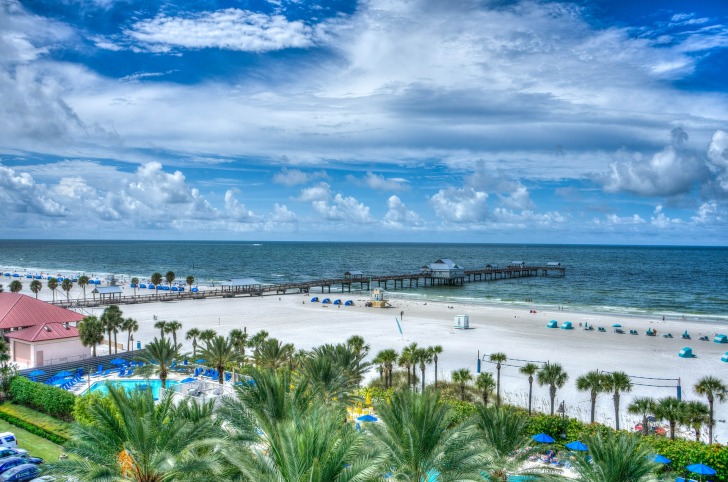 Clearwater, Florida, is home to one of the best-ranked beaches in the country and the world.

It’s surrounded by water with the Gulf of Mexico to the west and Tampa Bay to the east.

The city of Clearwater includes Clearwater beach and there is as much to do on or near the water as there is on land.

You can dine with your toes in the sand or all dressed up as Clearwater offers so much cuisine variety.

Saunter down Cleveland Street to get a more urban feel while still enjoying the gulf breeze.

The Pier 60 Sugar Sand Festival is a top tourist draw in the spring with intricate sand sculptures that will blow your mind.

Every spring, America’s favorite pastime heats up with Spring Training and Clearwater is home to the Philadelphia Phillies.

With all the visitors comes a higher risk of crime than the Florida average, but the actual numbers can be misleading when you look at the rates of residents vs. tourists.

Clearwater has a medium risk overall, due to crime rates, weather hazards, and gulf dangers. That's not to say the overall city isn't safe, it just means you need to be educated about the environment before you go.

There is low risk when you use transportation in this area, and boy, do you have options! Cars, trolleys, busses, ferries, even a new free ride program all cater to tourists and are all regulated at a city or state level.

Larceny is the second biggest crime category in Clearwater, so we'll give it a medium risk. Larceny can happen when you leave belongings unattended at the beach or while shopping in the downtown area. Let's break down the real vs. reported numbers. o Larceny/Theft based on just population: 2200 in 100,000 crime rate o Larceny/Theft based on average tourism numbers: 51 in 100,000 crime rate.

There's a high risk of natural disasters in Clearwater. While the average day is going to be a perfect day at the beach, when the weather gets bad here it gets really bad, really quickly. Florida is known as the "Lightning Capital of North America" with 3.5 million strikes per year. Six months of the year, Florida is in Hurricane Season, so eyes are always on the tropics.

There's a low risk of getting mugged. 105 robberies were reported in 2019 to the FBI, one of the lowest crime categories across the board.

Barring an event like Tampa hosting the Super Bowl (again), there's a low risk of a terror attack in Clearwater. More likely targets would be in Orlando or at the Kennedy Space Center on the east coast of Florida.

The Clearwater Police list the common scams in the area, and they are no different than the nationwide trends. There's a low risk of getting scammed. Beware of anyone who is offering charter boat rides for a discounted rate. That's more about safety than being scammed, however.

Women are safe to travel around Clearwater, with a low risk of being victims of crime. It's good practice to stay out of dark alleys, don't flash jewelry around, and keep shopping items tucked away in a truck or hotel room.

In general, there's a low risk for tap water. Clearwater Public Utilities treats and tests the tap water year-round and it meets or exceeds safety standards. During hurricanes or some kind of sewage spill, the city is quick to notify residents if there is a boil order or water shortage.

Safest Places to Visit in Clearwater

The city boundaries nook and cranny through the Tampa Bay handle, but there are clear spots every tourist must-see and can safely do so.

Starting at Clearwater Beach, you can just sit and enjoy the sound of the waves, do some beachcombing, or take a swim.

The city of Clearwater offers this message to tourists:

“Come for the beaches, but stay for the shopping, dining, and live entertainment.”

From high-end resorts to mom-and-pop crab shacks, there’s something for everyone.

Downtown Clearwater is a daytime and nighttime adventure, with live music playing while frozen daiquiris are poured.

The Clearwater Police Department has 234 sworn officers, giving a rate of one officer per 500 people in Clearwater, and they patrol the roads, beaches, and businesses around the clock.

Places to Avoid in Clearwater

There’s no specific bad part of town in Clearwater.

In a city that caters to five million tourists a year, police work tirelessly to keep the community safe, provide safety information, and respond quickly to crimes in progress.

You want to avoid the water if you are not familiar with swimming in the Gulf.

The rip tides can quickly drag someone out to sea, and while there are ways to navigate the rip tides, you need to know ahead of time what to do before the panic sets in.

There are also the typical ocean critters of jellyfish, stingrays, and sharks.

You should avoid being outdoors if you hear thunder.

Lightning strikes happen all too often in Florida and Clearwater Beach was the location of a lighting strike that hit eight people on the beach in 2019.

Storms here are a whole different story than what you might be used to at home.

The good news is, these storms tend to be short, so you are back outside before you know it.

Safety Tips for Traveling to Clearwater

So... How Safe Is Clearwater Really?

Clearwater’s crime rate is higher than the Florida average, but that’s just based on residency alone.

When you factor in tourism numbers, the city is quite safe.

The highest crimes are property crimes, followed by larceny/theft and burglary coming in a distant third.

You need to keep your belongings close or safely stored away in the hotel room.

Weather can turn a perfect day into danger, and in the summer months, the storms bloom quickly.

I once had a convertible in Florida and I ran some errands and needed to shower before meeting friends for lunch.

I was inside my home for about 45 minutes.

As I sat in my convertible, I got soaking wet because a quick storm came by while I was inside and hadn’t noticed.

You have to be weather aware here.

It can change by the hour.

How Does Clearwater Compare?