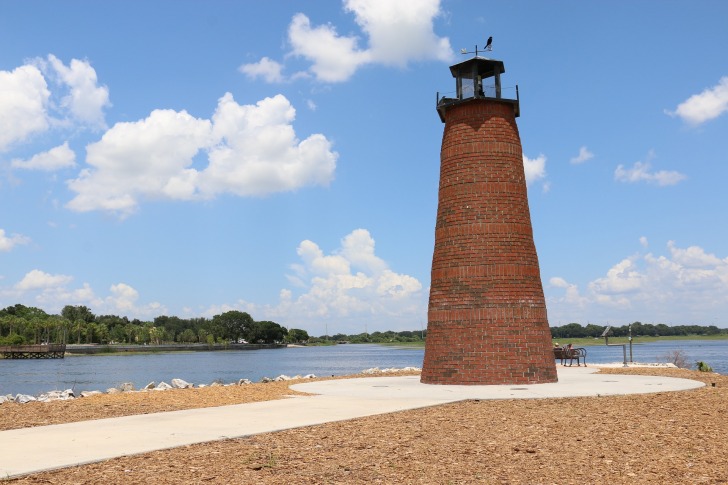 Kissimmee, Florida, is part of the greater Orlando area, filled with neighborhoods, nature, shopping, and dining.

It’s bordered on the south by beautiful Lake Tohopekaliga.

Kissimmee is a mix of residential, business, and outdoors, giving the perfect blend for a work-life balance without the chaos of the Orlando traffic or huge crowds at Walt Disney World Resort.

Plus, you’ll have a theme park of its special flair right in your backyard.

A few housekeeping notes for this article:

Throughout the article, we’ll touch a bit on some of the biggest destinations in the area, but we’re going to keep it mostly focused on Kissimmee and what you can do within the city limits.

There's a low to medium overall risk here, depending on several factors. Crime rates are pretty in line with national averages. There are some surprises along the way that we'll dive into.

There's low risk with a lot of options. Kissimme has its SunRail system that takes you around town, with the most expensive ticket being $9.50. You can also grab one of the many regulated taxi cabs or rideshare. Traffic in the Orlando area is notoriously heavy just about all hours of the day, so if you rent a car, just be patient. There are a lot of tourists trying to figure out their way around.

There were 22 reports of purse snatching, but what I found interesting was the average amount a purse snatcher got away with was $25. A great reminder to not carry around large amounts of money. There's a low risk this will happen to you.

Many might assume since Kissimmee is inland it won't get a hurricane impact. That's not true. Even if a hurricane weakens when it hits land, it can still drop insane amounts of rain inland, causing flooding and damage. Funny, while researching this, I saw a report that read "(In Kissimmee) Only 76 hurricanes have been reported since 1930." Well, that's nearly one per year. While there are other parts of the state more prone to hurricanes, Kissimmee and the Orlando area still get the sloppy leftovers of the big storms. In fact, since 1999, Disney World has closed 5 times due to approaching hurricanes. Plus, inland Florida gets some pretty gnarly thunderstorms too and can have short-lived tornadoes. All that said, it's medium risk.

There were only 32 robberies reported in Kissimmee in 2020. That's half the national average. That's a low risk.

There's a medium risk here just because it's so close to Orlando where a lot of hard targets could be ideal for terror groups. It's also just 60 miles from Cape Canaveral, another possible target.

There's a medium risk of a rental scam here. This has been a growing trend in many tourist areas. The scammer gets photos of a home, any home, and lists it for rent. The tourist makes a deposit on the property. When the renter arrives in town, there's no vacation home, and the person who took the money is long gone. Make sure you are dealing with a licensed rental company, or it might be smarter to stay in an established hotel. Other scams in town are mostly focused on residents.

It's safe for women to travel here and there's low risk. While the rape report average is in line with the national average, there isn't anything in the crime data otherwise that shows a woman is at a higher risk. There are dangers anywhere of walking around at night, and if you are going into one of the many nature spots alone be sure to have a buddy who knows where you are going and when you plan to be back.

While there has been a history of tap water problems in the Orlando area, the public works departments have spent years getting everything up to standards. There's now a low risk as it meets or exceeds all standards. It might taste a little funny due to its high mineral content, but it's perfectly safe to drink.

Safest Places to Visit in Kissimmee

Kissimmee Lakefront Park is a beautiful way to start or end the day with sunrise or sunset on the horizon.

There’s a small lighthouse and a fishing pier.

The Kissimmee Historic Downtown District, right next door to the park, is a throwback to the past with an edge of modernism.

A must-see in this area is the Monument of States.

It’s a tower built with a rock from each state with an eagle on top and it was inspired after the Pearl Harbor attack in 1941.

A local man wanted to create a unique memorial of American solidarity.

Not to be confused with the historic downtown, is Old Town Kissimmee.

This is a throwback to the amusement park of simpler times.

Grab an A&W Root Beer float while you walk through dozens of shops.

Maybe wait to eat at the family-favorite Shoney’s until after you’ve gone on the Hurricane roller coaster.

Celebration is another community worth visiting.

Initially designed as the “Perfect Upton City” by the Disney Corporation, it’s now not connected to Disney at all, but you can see its fingerprints everywhere in the beautiful designs.

Unfortunately, a brutal murder happened here in 2020, putting safety concerns at the forefront, but that was a domestic situation and as sad as the tragedy was, it doesn’t reflect the aura of the city.

Then there’s stunning Lake Tohopakaliga on the south side of the city.

There’s a smaller lake on the east side of the turnpike known as “East Toho.”

There are airboat tours around the lake’s border.

It’s also a great spot for some freshwater fishing.

Places to Avoid in Kissimmee

There aren’t any habitual bad parts of town in Kissimmee.

Crime maps show the central area of town from north to south has the highest crime rates.

As much as this city is away from the big tourist areas of Orlando, there is still an overflow of tourists looking for the same thing others are — a less crowded area.

Little but little, it’s becoming harder to come by as the city grows and more tourists hear of Kissimmee.

Being a tourist in a place that’s so busy can cause people to put their guard down or get distracted.

Always lock a car if you have one and keep your belongings out of plain sight.

Leave them in the trunk if you can, or better yet, leave whatever you don’t need at the hotel.

Always park in well-lit areas, and keep a close eye on the purse or wallet, especially when you are in a crowded area.

Safety Tips for Traveling to Kissimmee

So... How Safe Is Kissimmee Really?

It’s as safe as an average American city.

The crime rates show nothing that stands out as super concerning.

Theft is the only crime that goes higher than the national average.

Being such a family-friendly destination, it’s likely you’ll be bringing the kids with you.

This is a great time to talk about stranger danger, how to get in touch if they get lost, and any other important safety steps.

If you notice a lost child, contact the police immediately.

The natural areas come with the risks of drownings and alligator attacks or getting caught in a storm with dangerous lightning.

These are all things you can avoid by wearing a life vest, avoiding swimming in the water for extended periods (if at all), and keeping a close eye on the weather.

A sunny day in Kissimmee can quickly turn stormy.

It storms most days in the summer for a brief period in the afternoon.

The closest beach to Kissimmee is Cocoa Beach and that’s 60 miles away.

Disney World is 13 miles away.

Universal Studios Orlando is 18 miles away.

How Does Kissimmee Compare?