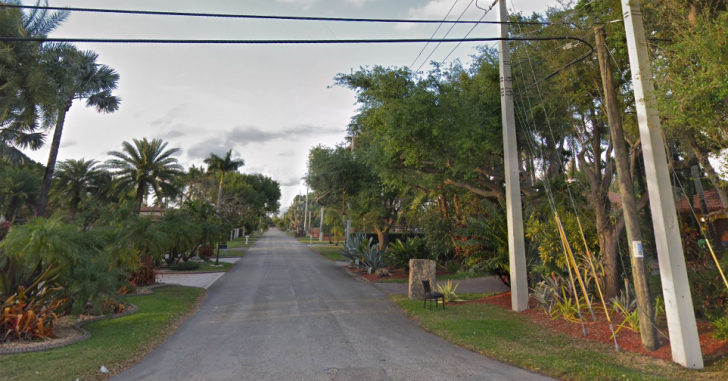 Miramar, Florida was designed as a bedroom community in 1953 and it hasn’t changed much since.

It’s gotten bigger, but the vibe of the community hasn’t changed much.

It’s nestled between Pembroke Pines, Hollywood, and West Park with the Everglades forming the western border.

Miramar (pronounced “Meer-UH-mahr”) is named after the Miramar area in Havana, Cuba.

This is not to be confused with Miramar Beach, which is located on the Florida panhandle 620 miles away.

The city is among the most ethnically diverse in the Miami area and has a Jamaican population of more than 17,000.

In 2021, the first Jamaican mayor was appointed.

Nearly 40% of this community was born outside the United States.

That diversity feeds the cultural food flair in this small slice of Miami life.

The city itself transitions from the east side, where homes are older and there are more locally-owned stores, to the west side, where gated communities keep popping up and there’s a Starbucks around every corner.

Any bedroom community is going to be built around family-friendly activities, and there are plenty to visit in Miramar, Florida before you even get close to a beach.

There's a medium overall risk in Miramar, and I've re-typed that several times from low to medium. The crime statistics put it in the low category, but it's also surrounded by a big city with lots of crime, so I don't want to be too blasé about the crime risk. I'd rather be safe than sorry for your informational search about Miramar.

There's a community shuttle in Miramar with four routes to take you through the city. Broward County Transit also has routes throughout the greater metropolitan area. Taxis are regulated by Broward County, which limits the number of licenses given. Make sure your driver has proof of a Certificate of Public Convenience and Necessity. Rideshares are available in this area under regulation by the parent company and the county. All of these options have a low risk.

There were no reports of pickpockets or purse snatching in Miramar in 2020. There's a low risk that it will happen to you.

Hurricanes are the biggest concern in any Florida city near a coastline. June through November is hurricane season, so you'll need to keep an eye on your favorite weather app. Severe storms can happen year-round, but mostly in the summer months during the rainy season. These storms form quickly, can get quite intense, and then move on. We'll call that a medium risk because Florida storms are to be taken seriously.

Muggings hardly ever occur in Miramar, walking the streets is usually safe around here. However, walking alone late at night is not recommended.

Miami is always going to get a little extra attention from Homeland Security due to possible terror attacks, especially when major events are happening. There's a medium risk, but not something you should worry about every day.

There's a low risk of scams here. There are plenty of scams reported, but they are against residents of the city, not tourists.

I was surprised to see 44 rapes reported in Miramar in 2020, and even more disgusted when I read about some of the cases. Because of that alone, we'll call it a medium risk. Several of these crimes involved people meeting online and then deciding to meet in person. If you meet someone new in the Miami area, don't go to a place where you are alone with them. Another rape happened while a woman was sitting in her car. Always keep doors locked and don't stay anywhere longer than you need to, especially after dark. Only 19 of the rape cases were solved.

Miramar's tap water meets or exceeds the safety standards laid out by the EPA and the state of Florida. There's a low risk.

Safest Places to Visit in Miramar

On the east side of town, there’s Snake Warrior’s Island Natural Area.

It struck me as a little odd, yet very cool, to have a natural habitat in the middle of a major metro area.

Bird watchers are never going to want to leave.

With eight wetland areas, a lake, and archeological islands, you can see a variety of birds, from ospreys to wood storks.

Take a ride on an airboat at Mack’s Fish Camp.

This is the closest location to the Everglades from Miramar.

If you end up on a gravel road, don’t worry, you’re going in the right direction.

The owner is a Gladesman that several people have compared to the real Crocodile Dundee.

See what activities are happening at the Miramar Cultural Center while you are there.

Even without a big event, you can tour the botanical gardens and the art gallery.

Places to Avoid in Miramar

There aren’t many bad parts of this town because many communities are gated and you can’t get into them.

This is among the quieter parts of the Miami area and there is not a big draw for criminals to lurk around this community.

Crime maps show the farther east of I-75, the higher the crime rate.

With any city, you want to avoid being in a strange part of town at night.

If you are looking for nightlife, you’ll probably have to leave Miramar since there aren’t many options.

When you return, take the main streets back as those are well lit and easy to navigate.

Safety Tips for Traveling to Miramar

So... How Safe Is Miramar Really?

Violent crime, aggravated assault, robbery, and larceny are all below the national averages.

I spoke to a friend of mine who lived in Miami for years and told her about the crime statistics and she said that surprised her, but there had recently been a big crime in that area that was probably polluting her overall impression.

There just really isn’t much in this community to spawn crime.

With so many neighborhoods, it would make sense that most of the crimes would be domestic in nature or at least victims and criminals who know each other.

The city police department even has a Code Ranger system set up where people in neighborhoods can keep an eye out for code violations like the trash being put out too early or grass that has grown too high.

There are neighborhood crime watches as well, but when police are asking for help monitoring overgrown grass, how dangerous can a community really be?

How Does Miramar Compare?