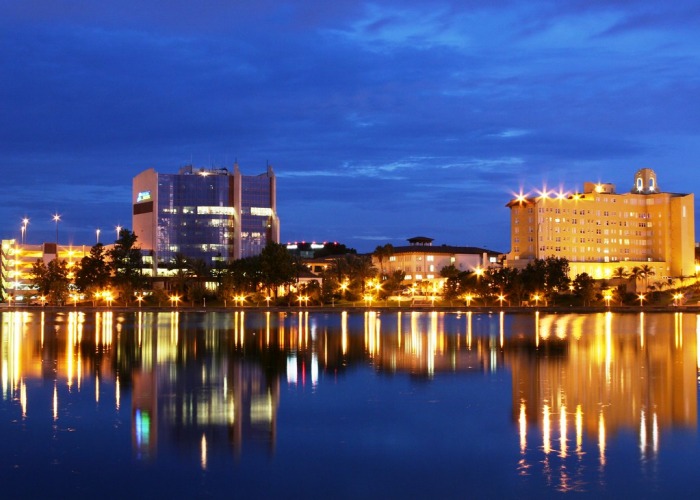 Lakeland, Florida, sits between Tampa and Orlando along the very busy I-4.

This is no pit stop town, however, as it brings a lot of travel options away from the busiest part of the theme park corridor while still having Disney World and Universal Studios less than an hour away.

There are 38 lakes in Lakeland, which is where it got its name. It’s a lot better than another option – Red Bug.

The city also has a rich history with the largest collection of buildings designed by famed architect Frank Llyod Wright.

It’s also the headquarters for the wildly popular supermarket chain Publix (if you ever get a chance, try the chicken tender sandwich).

Aviation is a big business here and has been since the 1940s when the Army Air Corps trained pilots at the Lockwood School of Aeronautics.

At Drane Field on the other side of town, B-24 Bomber training was held.

The Detroit Tigers hold their spring training here every year, bringing in additional crowds to this city often overlooked by tourists heading to the larger neighboring cities.

Lakeland has even made it to Hollywood with part of Tim Burton’s movie Edward Scissorhands, which was shot at Southgate Shopping Mall.

If all that isn’t enough to convince you to stop on your way to or from Disney World, how about a real-life Wilderness Safari within the city limits?

There's a low risk here. Lakeland has crime rates that are mostly under the national average, but not by much. This is also in a busy corridor with a lot of transient traffic, so having lower than average crime rates is a real testament to the safety of the community for neighbors and visitors.

The Citrus Connection is the bus system for Polk County. Lakeland is right on the western edge of the county, so transportation goes far north, south, and east, but there isn't a route west. Taxis and rideshares are readily available, as are rental cars. There's low risk with any option.

With less than 20 pickpockets reported in 2020, there's a low risk, but that's still a bit higher than some other Florida cities of similar size. With so many people coming through here, you need to pay special attention to keeping wallets and purses small, secure, and out of sight.

There's a medium risk year-round due to severe thunderstorms, excessive summertime heat, and hurricanes/tropical storms from June through November.

This is low risk, with the average about 10% lower than the national average. On top of that, just 9% of robberies in 2020 happened in public spaces.

Another low risk here, with a small town in between two very large cities. While Lakeland would be impacted by the traffic or escape routes of any kind of attack, it wouldn't be a hard target.

There are typical spoofing and utility scams, but a tourist wouldn't necessarily notice that happening. Scammers here are likely to attempt to target elderly people, so just avoid any situation where someone presents an urgent situation where you need to give them money or buy gift cards.

Women should feel safe with low risk when visiting Lakeland. It's a great town, but it's also more suburban with activities during the daytime. It's definitely not a town for nightlife.

Yet another low risk with full compliance in all federal regulation categories, according to the 2021 Water Quality Report.

Safest Places to Visit in Lakeland

Safari Wilderness Ranch is one of the top places to visit on the I-4 corridor loaded with theme parks.

This 260-acre adventure takes you through Florida’s replica of a safari and is ranked in the top 10 safari attractions nationwide.

There might not be an overly-happy mouse here, but there are zebras, camels, fainting goats, and many exotic species usually only found in Africa.

Stop by the Sharp Family Tourism Center to get a lay of the land and the background of Wright’s presence in the community.

Circle B Bar Reserve is the place to go if you want to see an alligator.

Ok, you can also go hiking or biking too.

There’s a plethora of Florida wildlife here, and tram tours are available throughout the month if you don’t have the ability or desire to hike a long distance.

For the more adventurous, take Alligator Alley Trail, and you’ll go by a lake filled with alligators.

View from a distance, and don’t try to feed them.

Aviation is a big deal in Lakeland, with the SUN ‘n FUN Aerospace Expo taking place once a year, and it’s the largest convention in Florida – which says a lot!

If you don’t time your trip with the expo, stop by the Florida Air Museum next door and see vintage, historic, and modern aircraft.

The Silver Moon Drive-In Theatre is another vintage place to visit in the city, with movies showing throughout the week and some double features available.

A snack bar helps support the drive-in’s 70-year history, so if you can afford to, eat there and don’t bring in any food.

If you’re visiting during late February or March, check out a Detroit Tigers Spring Training game.

Florida is home to the Grapefruit League and the biggest names in baseball play on these fields to get ready for the season.

I loved Spring Training because you get very close to your favorite players and it feels like a little league game but with major league players.

Places to Avoid in Lakeland

You can travel throughout Lakeland without any worry of ending up in a bad part of town.

I would recommend avoiding getting to or from Lakeland during the rush hours as traffic on I-4 is thick.

There’s never really a GOOD time to travel on I-4 without traffic, aside from the middle of the night.

Just be patient and take your time.

You should keep an eye on the tropics if you are visiting from June through October, as that’s when hurricane season happens.

Even though Lakeland doesn’t get direct hits, storms that cross the state can bring large amounts of rain and destructive winds.

You can travel throughout Lakeland without any worry of ending up in a bad part of town.

I would recommend avoiding getting to or from Lakeland during the rush hours as traffic on I-4 is thick.

There’s never really a GOOD time to travel on I-4 without traffic, aside from the middle of the night.

Just be patient and take your time.

You should keep an eye on the tropics if you are visiting from June through October, as that’s when hurricane season happens.

Even though Lakeland doesn’t get direct hits, storms that cross the state can bring large amounts of rain and destructive winds.

Safety Tips for Traveling to Lakeland

So... How Safe Is Lakeland Really?

Lakeland is a relatively safe community, but like too many American cities, it is seeing an influx of violent crime and a concerning homicide rate increase.

There are gangs in Lakeland, and many of the violent crimes are among people who know each other.

The sheriff of Polk County is frustrated by the increase in homicides.

“What’s that all about?

Quit murdering your friends and your family.

I know that’s a novel idea for some people,” Sheriff Grady Judd said.

“Our murder rate is up while our total crime rate is down, but even in the demand for service, we see the angst.”

He also has a message for anyone who thinks of committing a violent act, “Just chill out, drink a 7up, eat a MoonPie, quit murdering people.”

The only crime rate that is above the national average is theft, but again, 30% of those are car break-ins.

With so many people coming in and out of Central Florida as tourists, you need to protect your belongings and never leave anything unattended.

That said, you’re much more likely to see an alligator than a violent criminal on your trip to Lakeland, Florida.

How Does Lakeland Compare?