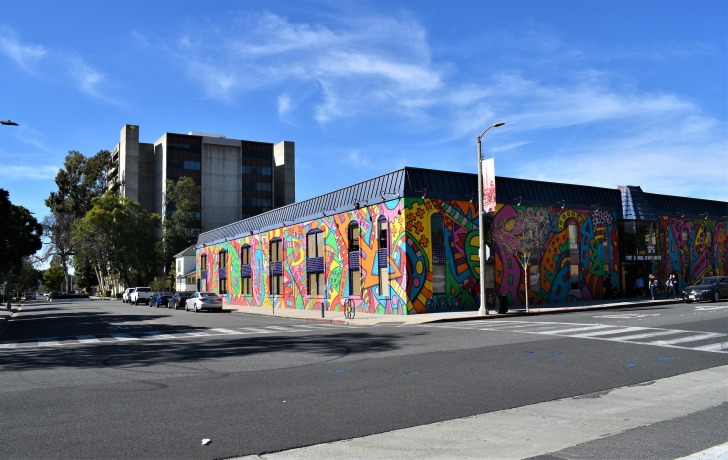 Pomona, California, is a diverse city in the Pomona Valley and is named after the Roman goddess of fruit.

While agriculture still has a strong presence in Pomona, the expanse of tourist attractions is a whole different kind of fruit-bearing opportunity for visitors.

The first thing you’ll notice when you Google information on Pomona are the pages and pages of college information.

(Generally referred to as CalPoly Pomona).

There are 20,000 students who attend this school, and while it’s a college town, there’s more to it than CalPoly Pomona.

Pomona (pronounced: puh-MOAN-uh) is popular for many reasons, including it being the site of the annual L.A. County Fair in May.

It’s also a hot rod lovers’ dream with car shows throughout the year and an NHRA Raceway.

The location of Pomona is fantastic as you are just 30 minutes from the highest mountain peak in Los Angeles and less than an hour from the beaches of Santa Monica.

Is it as safe as it is scenic?

There's a medium risk in Pomona. All crime rates are above the national and California averages. While it's common for cities around Los Angeles to have a certain amount of crime, gang activity, and drug problems, Pomona just rises a little higher on the safety concern rating than some other nearby cities.

There are many low-risk options in Pomona, as public transportation is popular throughout the county. You can take the bus via Foothill Transit Silver Streak, or ride the MetroLink train. There are taxis and rideshares available as well. For those with a car, Pomona has incredible access to nearby freeways, including the busy I-10. That low risk comes with you practicing proper safety measures and keeping your belongings secured and being aware of your surroundings at bus or rail stops.

There's a one in 50 chance of being a theft victim here, but that includes the entire category of thefts. Drilling down those numbers, I found there were just 13 reports of pickpockets or purse snatchings. That's a low risk.

It was eye-opening when I found all the disasters the Pomona Emergency management prepares for each year. These include earthquakes, flooding, mudslides, wildfires, and extreme winds or heat. All that potential disaster adds up to medium risk. You can feel confident knowing the city has a plan should any of those events occur and you can read it on their website.

There's a medium chance of a mugging here. The robbery rate is twice the national average. The robberies that took place in areas where you would find visitors accounted for 38% of all robberies. It's not unsafe to be in Pomona, but there's just enough concern to keep you more on guard.

The 488 emergency operations guide for Pomona states, "The entire Los Angeles Basin is considered a possible risk area for a nuclear event or act of terrorism."

There's a low risk of being scammed. While Pomona does have scams, they are generally aimed at people who live there, like a utility scam or someone claiming to be a police officer with a warrant unless they get cash.

There's a medium risk here as there is for everyone. Don't walk around after dark alone, or even in a small group. Stay safely in a car when traveling and keep the doors locked. There are gangs on all sides of this town.

The drinking water is a low risk here, despite challenges of contamination in the late 2000s. The city recently won a $48 million verdict for the water pollution that resulted after using fertilizer on the crops, which then leaked a toxic chemical into the water supply.

Safest Places to Visit in Pomona

Pomona has several museums that cater to all kinds of tastes, hobbies, and history:

There is a lot of housing directly in or above the businesses of the downtown area.

The second Saturday of every month is the Art Walk and Market Night, allowing people to enjoy the outdoors while shopping for novelties.

The Pomona Historical Society has several buildings dating back to the 1800s open for tours.

You can see designs from the first adobe structure built to a Victorian-era home once at risk of demolition but saved in the nick of time.

Mt. Baldy is just north of Pomona and is the tallest peak in the LA basin.

Its official name is Mt. San Antonio, but everyone calls it Mt. Baldy for the lack of trees near the top of the peak.

The California Botanic Garden is just north of Pomona, providing a look at the native plants of Southern California.

Places to Avoid in Pomona

You will want to avoid the neighborhoods in Pomona unless you are visiting friends and relatives.

The neighborhoods are just so hit-or-miss about their safety.

Many online posters say the south side is very dangerous, while others say to avoid going north of I-10 and it’s a historically gang-ridden neighborhood.

Stay on main roads and avoid driving or walking around at night.

While many crimes here might be domestic or gang violence, you also don’t want to get caught up in a bad situation accidentally.

All crime rates are higher than the national and California average here.

There are prostitutes in town, and especially close to the Swap Meet area of town.

The museums are safe attractions and provide plenty of entertainment, but you’ll need to secure your car if you’re driving.

Lock the doors, roll up the windows, use an anti-theft safety device if you have one, and leave no belongings in plain sight.

Even the GPS holder can be a target for thieves.

Safety Tips for Traveling to Pomona

So... How Safe Is Pomona Really?

It’s not as bad as it used to be, but it’s still not safe.

Here’s how the crimes break down:

There’s been a steady decline in crime trends over the past 10 years, showing the efforts to clean up the city are paying off, but there’s still a long way to go.

Here’s what some locals say about Pomona in social forums:

You need to be very vigilant and extra cautious in Pomona.

There are a lot of interesting things to see and do here, but there’s a rough side of this city that isn’t meant for tourists.

If you get weirded out by uneasy safety feelings, you might want to look for a nearby city to visit with lower crime rates.

How Does Pomona Compare?