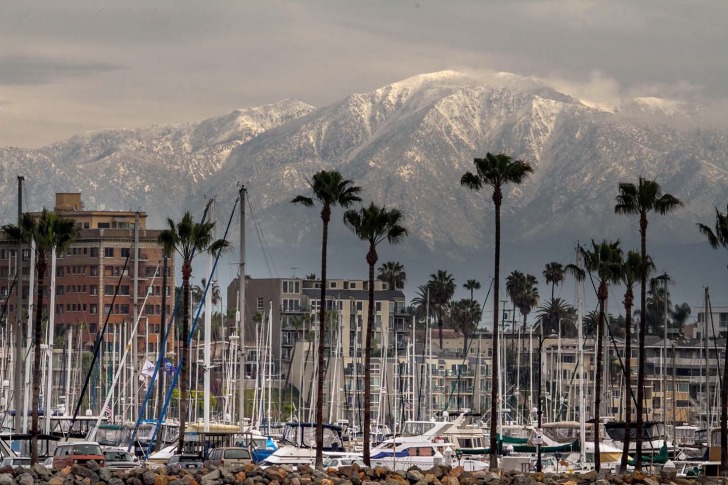 The city is on the eastern edge of the mega-region and is at least an hour from L.A., and that’s before you add in any traffic.

It is close to mountains, lakes, and the deserts of Southern California.

San Bernardino is also a city and a county, but here we’ll be talking about just the city.

It’s a major transportation and distribution hub, with Cajon Pass driving right into the city and major highways in all directions.

This is also very close to some of the most popular SoCal lakes and mountains.

The community is mostly Hispanic/Latino, bringing a variety of cultural attractions in addition to outdoor experiences you can’t get in the urban area of L.A.

If you’ve ever enjoyed a McDonald’s meal, you can thank the McDonald brothers, who opened the first location here.

A museum now stands in its original location, and there’s a dramatic story about how a popular local restaurant became a global franchise.

The 2016 movie “The Founder” tells the story, albeit with some Hollywood liberties.

San Bernardino has a medium risk overall but a high risk at times. Even 24/7 Wall Street ranked the city as one of the country's top three most dangerous in terms of crime rates, weather risks, and traffic dangers.

Omni Trans is the local fixed-route bus system to get around the Inland Empire, but you'll need to use the MetroLink train to get to Los Angeles. Taxis, rideshares, and rental cars are plentiful. Due to extremely high crime levels in the city, I'd avoid using the local bus system or use an abundance of caution at bus stops and while riding.

The police department doesn't report the number of pickpockets in its 2021 data report, but thefts are one category that is only slightly more than the national average. You should be highly aware of the pickpocket risk during festivals and events. On an average day, just make sure you don't carry an expensive purse or have a wallet brimming with cash visible. It's always safer to carry a wallet in the front pocket instead of the back pocket.

Wildfires are the biggest risk here; with several sides of the city surrounded by wilderness and the Inland Empire's unpredictable winds, fires can quickly threaten people and property. Extreme heat is another issue, especially in the intense summers. Flash flooding can happen a few times a year when it does rain. Oh, there's an ongoing earthquake risk too. So treat this area as medium risk and study the emergency management information to be better prepared.

The robbery rate is three and a half times higher than the national average as of 2021 crime data and was up 10% halfway through 2022. There are a lot of gang members in this area who aren't afraid to use weapons. If you are confronted by a robber, just do what they say. Don't risk your life. Lower your risk by staying off the streets at night and sticking to well-lit entertainment districts.

The whole Los Angeles region is considered a hard target. With more than 18 million people, the critical ports, and a military presence, you should also know there is plenty of security here too. Honestly? You should be more worried about crime in San Bernardino than terrorists.

The scams are trending toward fake police officer phone calls demanding money, or the victim will be arrested. While there aren't any tourist-specific scams, there are some red flags to look for - people selling expensive jewelry out of a car's trunk (usually fake), and people claiming to be illegally in the country with a winning lottery ticket. The "winners" approach you by saying if you give them the winnings, they'll give you the lottery ticket. Of course, it's a fake ticket. This is an area where people will try to hustle a sucker, so don't be a sucker. Any deal that is too good to be true usually is.

Sexual assault is actually down from 2021 for the first half of 2022, but it is still slightly above the national average. While most of these crimes are domestic, it's smart to avoid private house parties or meeting someone online in a private place. With the influx and abrasiveness of crime here, it's not worth the risk.

The 2021 Water Quality Report shows no violations and full compliance with federal standards. The biggest water risk here is that there isn't enough of it. Strict conservation measures are usually in place, so review that on the city's website. If you have a water quality concern, please contact the Department's Water Quality Control Officer by emailing con.arrieta@sbmwd.org or calling (909) 453-6190.

There isn’t an official tourism site for the city of San Bernardino, but both the city and county websites have information about things to see and do.

Look for the “.gov” at the end of the website to ensure you are on a government website.

There is discoverie.com, which is for Discover the Inland Empire.

You’ll get information about the region, but it is an official tourism website.

Using secure websites is just a safer way to research.

The VisitCalifornia.com website is the official site for the state.

Part of the famous Route 66 goes through San Bernardino.

This is also where you’ll find the McDonald’s Museum.

It’s hard to find official information about this, as the museum is an “unofficial” location.

The story behind McDonald’s is no happy meal, and you’ll learn how Ray Kroc was involved in the — drama — is that the right word?

Anyway, watch The Founder or wait until you get to the museum.

I just hate to ruin a good story for tourists here.

But it IS a good story and might change how you see McDonald’s today.

The San Bernardino History and Railroad Museum tells the story of the settlement of this area and how vital the trains were to keep it growing.

You can also learn about Wyatt Earp’s time here and the impact of the December 1812 earthquake on the region.

You can visit the Museum of Art at California State University San Bernardino, named after Robert and Frances Fullerton.

Just north of there is Andy Jackson Airpark, where you can take paragliding lessons.

Yaamava Resort Casino is a great way to enjoy Vegas’s thrills without leaving the Inland Empire.

There’s a full casino, luxury accommodations, and an extensive spa for ultimate relaxation.

For another unique hotel experience, stay at the Wigwam Inn, where each room is in a climate-controlled wigwam.

The San Bernardino Mountains tower on the east side of the city.

You can take a road trip up the Rim of the World Scenic Drive for stunning and incomparable views of the valley below.

Keep going to Lake Arrowhead, where you can marvel at the natural wonder of an arrow etched into the mountainside.

An hour from San Bernardino is Big Bear Lake, which is popular throughout the year but also known as one of the closest and best ski areas near the Los Angeles basin.

Places to Avoid in San Bernardino

San Bernardino has crime spread throughout the community, with the central core – south of the 210, north of Mill Road, and east of the 215 being the higher crime areas.

Even looking at the interactive crime map over the past few months, it’s hard to see a safe vs. not-so-safe area.

There’s a good deal of crime southeast of the airport too.

Before you head into the mountains or up Cajon Pass, you must check road conditions, weather conditions, and wildfire risks.

Popular parts of the mountains can be blocked off by an approaching or previous wildfire.

The lands hit by wildfires are also more prone to landslides when it rains.

The summer heat here is serious, and the winds can also be quite intense.

Bring sunscreen and keep yourself hydrated.

So... How Safe Is San Bernardino Really?

While many large American cities are reeling from an influx of violent and gun crimes, San Bernardino has faced this challenge for decades.

The violent crime rate is three times the national average as of the end of 2021.

Halfway through 2022, every crime category was up from 4% to 31% except rape and motor vehicle theft – and the thefts were only down 4%.

San Bernardino sees the majority of violent crimes happening among a small population of people, anywhere from 50-200 people causing the bulk of the problems.

These criminals are likely involved in gangs or the drug trade.

The suspects are more likely to be minority men who were never given a chance to find a life outside of crime.

With a 24% poverty rate in the city, sometimes crimes are directly related to being able to provide for a family.

While that’s probably a little too in-depth for this article, I mentioned it because the only way to stop systemic poverty and underserved communities is to stop the risk ahead of time.

The city has an aggressive crime plan in place to help lower the risk, but staffing levels in law enforcement combined with the sheer number of crimes is causing many cities not to meet their crime reduction goals.

If you’re visiting San Bernardino for a personal reason – like a wedding or family gathering – you just need to be cautious.

Avoid potentially dangerous situations, like large crowds that get rowdy.

Even when a crime isn’t directed at a visitor, the risk of being an innocent bystander caught in the crime isn’t worth it.

You can’t put a price on your safety.

How Does San Bernardino Compare?