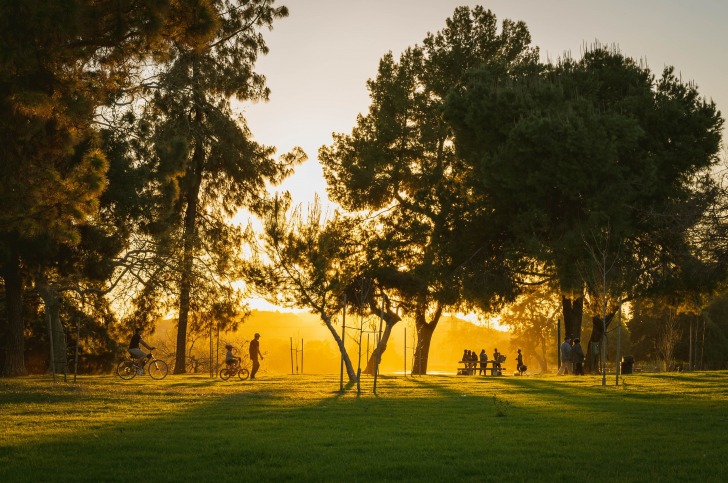 El Monte, California, refers to itself as a friendly city and comes with a dense suburban feel.

It’s an ethnically diverse city with Caucasians just making up 4% of the population.

84% of people who live here speak a language other than English at home.

This is a working-class community with basic suburban amenities, but not a lot of tourist draws.

There also aren’t a lot of hotel options in El Monte.

I counted six hotels and they aren’t going to be any fancier than a safe place to rest your head and maybe a free breakfast.

The city claims to be the end of the Santa Fe Trail, but it’s an ongoing controversy since the real Santa Fe trail ends in New Mexico.

The story goes, that the Sante Fe Trail had a Spanish Trail expansion that ended at the banks of the San Gabriel River.

Whatever version of history you believe, you can still visit the historic park where a settlement turned El Monte into the community it would become today.

There's a low risk in El Monte, with some concerns we'll need to talk about. The overall crime statistics are average or below average, but of the 9 homicides in 2020, three of them were juvenile gang homicides. So, there's a mixed bag of crimes here.

El Monte has a shuttle service to get people to the MetroLink, a business park, the civic center, and a bus station. If you want to get to some of the shopping destinations, you'll want to take the El Monte Trolley. For 50 cents a ride, you can get to some of the top destinations in town. Rideshares and taxis are available. All options are low-risk.

The theft rate has been going down since 2017 when the number peaked at 1431. In 2020, there were 980 thefts and four of those were pickpockets. Even in 2017 when numbers were high, there was only one purse snatching, so we can call it a low risk.

You have to worry about earthquakes, wildfires, winds, and flooding in El Monte, so there's medium risk. The city has a detailed emergency management plan for all scenarios, so you can feel safe knowing they plan for the worst and hope for the best.

There's a medium risk of a robbery here. The numbers are slightly above the national average. However, there's a greater chance of your car getting stolen than your wallet.

Since it's in the huge Los Angeles metropolitan area with lots of attractions, business headquarters, and military posts, it's well known that the region is a hard target for terrorists. The city also has a plan for that and Homeland Security is always working behind the scenes to keep people safe.

There are several scams in El Monte involving gift cards, but those are more targeted at locals. The scammers convince the person they are in financial trouble with the government, but buying Target gift cards can fix it. Sadly, too many people fell for this scam and two people were arrested on felony money laundering charges. There's a low risk for a tourist, but never buy a gift card for someone else, no matter what their reason is.

Women might want to take some extra caution here when it comes to walking around at night. There's an overall low risk, but you've got to be very vigilant here.

The Santa Fe Historical Trail is a great place to start, as it’s the birthplace of El Monte.

There’s a plaque and some artifacts there, surrounded by a small park.

There’s also a plaque detailing what used to be the best attraction in El Monte — Gay Lion’s Park.

It’s no longer open, but the plaque stands as a reminder that the city was once filled with the roar of lions.

The La Historia museum preserves hundreds of photographs of El Monte residents through the decades.

It celebrates the influence of Mexican Americans on the community.

Longo Toyota is one of the top-selling car dealerships in the country.

Along Main Street north of I-10 (aka The Ten), you’ll find a variety of stores and restaurants.

Some are name brands and some are locally owned and operated.

Places to Avoid in El Monte

Looking at crime maps, south of Garvey Avenue is where the crime rates are the highest.

As you can tell from the list of things to do, there isn’t much to do in El Monte for a tourist.

It’s important to note that South El Monte is a separate city from El Monte and North El Monte is what’s called a “census-designated area.”

The crime statistics I’m providing are just for the city of El Monte.

You should avoid driving around randomly at night.

There are gangs in this city, as shown by the homicide rates, and you don’t want to stumble into the wrong place at the wrong time.

So... How Safe Is El Monte Really?

El Monte is about average safety.

It’s a blue-collar town with hard-working people trying to keep up with the expensive cost of living in California.

The risk of being a crime victim breaks down like this:

El Monte isn’t a bad place to stay, but there are just not a lot of hotel options or things to do.

You will have to leave El Monte for some of the biggest California fun stuff, like the beach or the mountains.

You might have to drive or commute through some dangerous cities to get there, so check out the reviews of all the cities on your travel route.

How Does El Monte Compare?