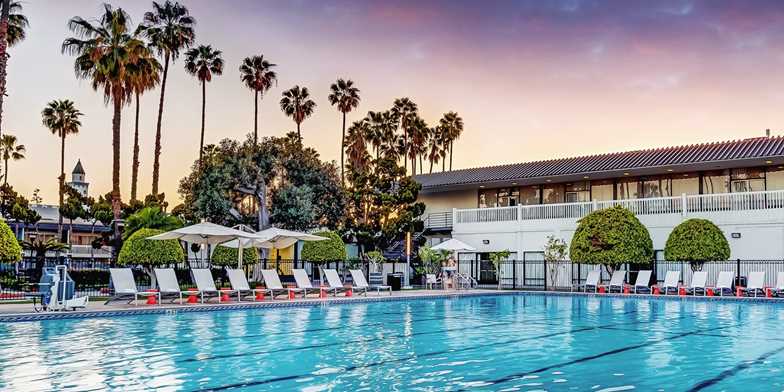 There’s a good chance if you’re heading to Anaheim, California, you will go to Disneyland.

More than 25 million people come through this Southern California city each year.

Anaheim holds more than just Disneyland, including the home to two major league sports franchises and quick access to some of California’s best wilderness parks.

Just to make sure you’re in the right place – Disneyland is in California and is next door to California Adventure Park.

Disney World is in Florida and is home to four theme parks and two water parks.

Anaheim is also where you can find a district called The Platinum Triangle.

This is the area around Angel Stadium, where the Angels play baseball, and the Honda Center, where the Ducks play hockey.

There’s been a community battle brewing for years about a “Tale of Two Anaheims.”

The tourism corridor looks vibrant and lush, while some of the neighborhoods are more run down with few amenities a wealthy city Anaheim should provide.

Then you have the upper-class Anaheim Hills, nestled up to Fremont Canyon Nature Preserve.

Looking at the crime data, there's a low risk. Violent crime is lower than the national and state average, but property crimes are higher due to an increased theft rate.

Anaheim Regional Transit (ART) is the public bus system throughout the city. Download the A-Way WeGo app to see routes and fares. OCTA is the public bus and rail system around Orange County. Most hotels are going to offer a shuttle service to and from airports. Rental cars are available, and taxis and rideshares are everywhere. There's low risk with any option but search for free rides before you start paying for them.

This is a high risk here, with a staggering 730 pickpockets reported in 2020. With so many tourists here, and conventioneers bringing high-value equipment, pickpockets are experts at blending in with the crowds and finding the perfect chance to steal something. The average loss from a pickpocket theft was $8,300. Wow.

I'm writing this over Labor Day weekend as Anaheim is facing an Excessive Heat Warning, so there's definitely a risk there. Wildfires and earthquakes are other big risks in this region. Winters are mild, snow is extremely rare, and tornadoes are unlikely.

The robbery rate is about 40% higher than the national average, but there's a much larger risk of being pickpocketed or having your car broken into. With so much security around Disneyland and the convention center area, violent crimes aren't quite as common.

There's a medium risk as Disneyland and Disney World are two of the top potential targets in the United States. On top of that, Disneyland is part of the second-largest metro area in the country.

The city of Anaheim lists scam alerts on its website, but the majority of complaints are about utility scams and IRS scams. Here's something I cannot stress enough - do NOT take anyone up on their offer to give you "discounted" Disney tickets. These scams keep happening over the years, breaking the hearts of children and parents. Yes, tickets are expensive, but you should only buy them from Disneyland's website to make sure you'll get access to the parks.

There is a low risk for women traveling here, and many of them have no choice but to do so for business. I can tell you, as a woman in my 30s, I visited Anaheim twice - once for a convention and once for work, and I never felt unsafe. I also used standard safety precautions and didn't leave the convention or Disney area. You'll need to be smart when walking at night and stay aware of your surroundings. Don't park in dimly-lit areas and use valet if you can, so you're never alone in a parking garage.

The 2022 Water Quality Report shows full compliance in a long list of tests, but there was one violation for failure to report during a one-month period in October 2021. There is no reason to indicate any water quality was compromised, as this was a reporting error. However, there's no way to be certain of that. Testing before and after the missed month showed the water met all the required standards.

Safest Places to Visit in Anaheim

Disneyland and California Adventure Park will be the top places to visit here, but you want to do plenty of planning ahead of time.

There are so many different levels of passes and length of visit options, plus the add-ons for meals or lightning lanes.

If you want to see the Avengers Campus, you’ll need access to Disney’s California Adventure Park, while Star Wars: Galaxy’s Edge is at Disneyland.

The parks have special attractions and events that happen during Halloween and Christmas.

The Anaheim Packing District is history, nature, and food adventures all wrapped up into one section of town.

There are two stories of food options in the Packing House, and reservations aren’t allowed.

Live music plays almost every day and night of the week, so check the schedule before you go if there’s an artist you’d like to see.

Flight Deck in Anaheim is a great way to explore your inner Maverick and fly like the team in Top Gun.

You get a full suit, training, and a virtual experience you won’t soon forget.

You can also fly a Boeing 737 if you want a less rigorous ride.

Head to South Anaheim for a trip to Little Saigon, where you can shop and eat Vietnamese specialties.

Be sure to arrive hungry because Pho is one of the most popular dishes here.

You can get food to go or dine in.

The Resort District is just south of Disneyland and full of hotels with an abundance of dining options.

The Anaheim GardenWalk is also in this district, with a bowling alley, House of Blues, and plenty of nightlife options.

I walked from the bowling alley here to my hotel across from Disney at night without a single concern.

There were plenty of other people on the streets, and I even got a great view of Disney’s fireworks on the way back.

There are great opportunities for wildlife viewing, skyline views, and unique California plants and flowers.

From Anaheim, you’re also about 30 minutes from the beach, with Huntington Beach and Newport Beach being the closest options.

Places to Avoid in Anaheim

West of I-5 (or “The 5” as it’s called) has lower crime rates than east of I-5, but overall, you shouldn’t run into a shady neighborhood by staying in the tourist corridors.

There are plenty of places to explore in this area, and unless you are heading to the mountains, you don’t need to go east of the Orange Freeway.

You might want to avoid finding a hotel farther away from Anaheim just to get a lower price.

The costs you’ll spend on parking, transportation, and sitting in traffic will far override the benefit of a lower price.

I was concerned when I went to Anaheim for the first time without a car, and it turns out I wouldn’t have used it if I had one.

Everything was just so easy to get to.

Remember those fireworks I mentioned?

They go off every night.

One night was cool, the second night was a novelty, and by the third night, I was over it.

Ask if you can get a room that faces away from the park if you don’t want to hear and see the fireworks every night.

Safety Tips for Traveling to Anaheim

So... How Safe Is Anaheim Really?

For a tourist or visitor on business, your biggest safety concern will be pickpocketing or theft of personal belongings.

With thieves going for laptops and other valuable devices, don’t be so worried about your wallet that you’re not paying attention to your tablet.

Avoid putting your wallet in your briefcase, since that could give a thief a two-for-one.

Using a device like an Apple AirTag is a great way to keep track of your stuff if it goes missing or gets taken.

Always have a copy of your mobile device codes and unique numerical identifiers.

It’s easy to get a false sense of safety in Anaheim, with everything appearing so shiny and clean.

There are neighborhoods in Anaheim where people live off of food stamps and feel there’s a disparity in the sharing of resources across the city.

In August of 2022, a teenager was walking home from work when a car pulled up, asked if he was in a gang, and shot him to death when he said no.

Those aren’t headlines you’re going to see outside Disneyland.

You might be in the Happiest Place on Earth, but the crime rates not only change by the city in the Los Angeles Metro Area – they can also change just a few streets over.

The best advice is to stay where the tourist attractions are and avoid going into the neighborhoods.

Don’t walk alone at night and always carry as little as possible when you are walking around.

How Does Anaheim Compare?