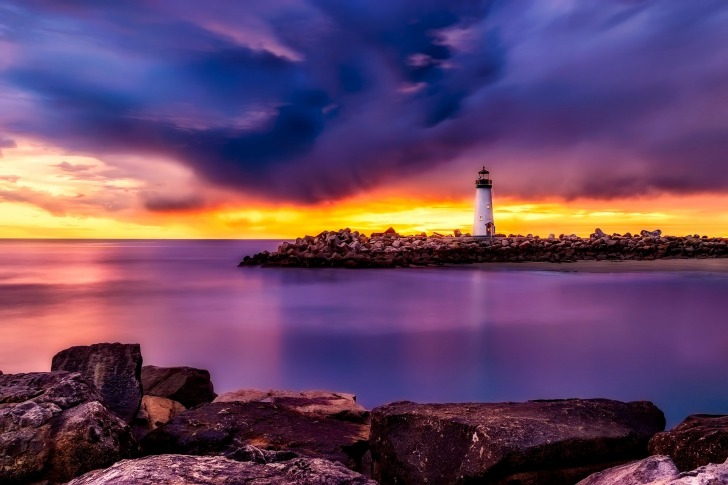 I should’ve started writing this article about Santa Cruz, California, 30 minutes ago but I got too caught up in all the breathtaking photos.

Santa Cruz is a sensational surfing and seaside wonderland.

The Beach Boardwalk is a hallmark of the community and has been going non-stop since 1907.

Two of the rides from back in the day still stand and draw long lines.

Abundant beach opportunities await whether you want to be a big kahuna and surf, spot some whales, tour the tide pools, or just sit and smell the salt air.

You’ll be an expert at tide schedules by the time you leave.

You can also head inland to get a look at some of the biggest trees in the world at Big Basin Redwoods State Park or the Forest of Nisene Marks State Park.

True crime junkies might remember this is the area where two serial killers operated in the 1970s, Edmund Kemper and Herbert Mullin.

Both have since been caught and are safely locked away.

Surfing fans will remember this is the hometown of pro-surfer Jay Moriarity, whose surfing skills were second to his positive influences and attitude that sparked the saying “Live Like Jay.”

This is a city that prides itself on having liberal views and is very LGBTQ+-friendly.

The artistic and eclectic flair of this town sets it aside from other more traditional beach cities.

There's a low overall risk but that comes with a heap of caveats. This city was once considered one of the most dangerous in America. Rampant crime, drug use, and homelessness controlled the streets. Police have since done a great job of cleaning up much of the crime, but there's still a grit to this seaside beauty.

Santa Cruz Metro provides the bus service here and throughout the county. Greyhound and Amtrack are also available in this area. In town, you've got traditional taxis and rideshares. There is also an in-town trolley system that mainly goes up and down Pacific Avenue. Whatever you choose, there's a low risk, but be vigilant at bus stops as there are a lot of homeless people here who can become aggressive.

I'm going back to 2019 for crime stats on this one because there was a sharp drop off during the pandemic. There were 18 pickpockets or purse snatching in 2019, a fraction of the 2,363 thefts that happened. There's low risk if you protect your valuables and keep belongings secured.

Wildfires are the biggest risk here and when one starts it can get big quickly. Assuming there isn't a wildfire burning during your visit, there's a low risk. If there is a fire, it quickly goes up to medium.

There's a low risk of mugging here but the robbery rate is higher than the national average. Since there is a grittier side to this city, it's worth the warning about not fighting back if someone takes your stuff by force. It's not worth risking your life.

With a more remote location on the coast and no military bases nearby, there's a low risk of terrorism in Santa Cruz.

The only reported scam that might impact a tourist is a romance scam that starts with meeting someone online and eventually they gain access to your accounts or convince you to give them money. You know better than that, right? We'll call it a low-risk.

Rape statistics are now at the lowest level in four years, and there is a one in 2,406 chance of that happening. Nothing else stands out that should give female travelers concern about being here other than the same concerns for others. You should have your guard up here, but there's no quantifying reason to say there's anything but a low risk.

Santa Cruz hasn't had a tap water violation since 2016, so there's a low risk. It also meets or exceeds all requirements of the EPA and state agencies.

You haven’t visited Santa Cruz if you haven’t gone to the Beach Boardwalk.

The boardwalk is more than a century old and still has the 1924 Giant Dipper roller coaster made of wood and the 1911 Looff Carousel.

Many more rides abound with options, from the dizzying Fireball to the “oh heck no I’m not going that high up” choice of spinning teacups.

This park has water rides and laser tag, as well as a Fright Walk under the boardwalk.

Plenty of dining options are on-site too, from a fresh seafood meal to a custom-sugared churro and root beer float.

Bring me back a funnel cake, will ya?

Now let’s head to the beach.

This is the longest wooden pier in the country and goes nearly 2800 feet over Monterey Bay.

To catch the surfers in action, the most popular spot is Steamer Lane.

Waves can get up to 18-feet high here.

If you walk far enough south on the beach, you’ll end up at Capitola Wharf, a Mediterranean-styled town with a gorgeous wooden pier.

Downtown Ambassadors are waiting throughout the day for a call to help you find the perfect spot for your trip.

Places to Avoid in Santa Cruz

The crime maps show the incidents are very widely spread out in the city, but it’s also not that big of a city at just 15 square miles.

The Beach Flats, which is near the boardwalk, is one of the more rundown parts of town, so avoid it if you can (which will be hard since it’s on the Boardwalk).

Lower Ocean is another neighborhood riddled with crime, but it’s also the entrance to the beach area.

You just always have to be on guard here, more than in some other beach cities.

This city is filled with people who believe strongly in whatever their belief system is and they have the courage of their convictions.

Don’t get into a political argument or stare at someone who might look different from you.

Inclusion and diversity are the essences of Santa Cruz and people express themselves in a variety of ways.

Just be open to whatever you see and don’t cast judgment.

There are surfing spots in California and then there’s Santa Cruz.

The surfers here take it very seriously, and you are among some of the best surfers in the world here.

Avoid going surfing near the professionals, no matter how good you did in your lessons.

Ask your surfing instructor where the best place is to go for practice.

Don’t just assume that because people are surfing in a certain spot, that means it’s okay for you to go there.

There is a long history of surfers vs non-surfers in Santa Cruz.

To get in the spirit of Santa Cruz surfing culture, watch the movie Chasing Mavericks.

One of my favorites!

You should avoid even thinking about giving to a panhandler.

Don’t look at them and don’t say anything.

They are notoriously aggressive here to the point where you should have your phone in your hand ready to dial 911 at times.

So... How Safe Is Santa Cruz Really?

Santa Cruz is a city some locals wish the rest of the world didn’t know about.

Ask locals, they’ll say there are too many drunk tourists that cause too many crimes.

Ask tourists, they’ll say there are too many aggressive homeless people and condescending surfers.

The city gets very crowded since it has so many amenities, but those crowds lead to thefts, fights, and drugs.

You can’t go to Santa Cruz and enjoy the best parts of it without also being in the most dangerous parts of it.

Car thefts and thefts from cars are some of the biggest complaints and crimes in Santa Cruz.

You have to take extra care watching and securing your car while you visit here.

Both the violent crime and property crimes in this area are higher than the California average.

There’s a drug problem here and a gang presence.

Is it an overwhelmingly crime-ridden town?

The potential is there.

Check your ego at the city line, lock your cars and park in well-lit areas, keep your belongings close and watch out for how much you drink.

If you see panhandlers, cross the street to avoid them.

If a situation feels shady, get away from it.

The average tourist is going to have a fun yet eye-opening experience here.

The average tourist is going to leave without becoming a victim of a crime.

A lot of the potential rests in how you behave while here.

How Does Santa Cruz Compare?