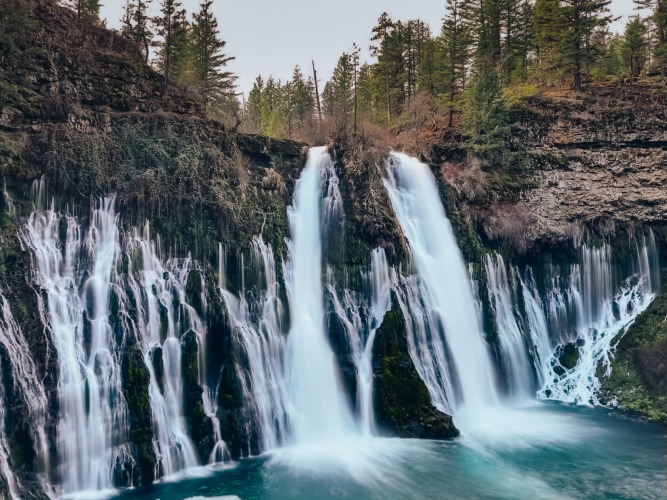 Redding, California, is smack dab in the center of Northern California and surrounded by outdoor adventures.

Redding gets more sunshine than any other city in California and is the second sunniest city in the whole country.

Ask anyone who knows anything about Redding and they’ll say it’s the scenery for them.

It’s somewhat secluded from the rest of the state, and that’s just how the people who live there like it.

Redding is also more affordable for living, at least by California standards, making it an affordable destination as well.

One of the world’s largest sundials dots the landscape in the city of Redding.

Turtle Bay Museum is a mix of a garden, zoo, forest, and art gallery.

Be prepared for scorching summers here because of the way the city is positioned in the mountains and how the wind flows in the summer.

This place becomes an oven.

Redding still gets all four seasons, but a double dose of summer heat.

There's a medium risk in Redding. The city was ranked in the top 40 most dangerous cities in America back in 2018. Redding has a drug problem and a gang problem. Crime rates are higher than the national average. It's a beautiful city with some gritty edges.

Redding Area Bus Authority is the public transportation for the region. Taxis and rideshares are readily available 24/7. Still, if you can get a car, you should. There's not a whole lot to do in Redding and you'll want to explore outside the city. There's low risk with any option.

There were no pickpockets reported in 2020, according to crime data submitted. Most of the thefts were put into the "All Other" category. While there's a low risk, there are parts of town where that risk might go higher.

Extreme heat, wildfires, and earthquakes are the top[ 3 disaster concerns here. There's a medium risk because of this. While you'll enjoy a lot of sunny days, you also have to be prepared for a worst-case scenario. Redding was impacted by the 2018 Carr Fire which led to the evacuation of nearly 40,000 people and did significant damage to the surrounding wilderness areas.

There's a low chance of being mugged. With 94 robberies reported, just eight were highway robberies.

There are no hard targets near Redding. This is a pretty remote area, so there's a low risk of a terrorist incident.

The most recent series of scams involved power bills for residents, so nothing that would impact a tourist. There's a low risk. The only caution to use is, if you are renting a home during your stay, make sure the person who listed the property has proof of a license to rent. If they can't show you one, it might be a scam. Never wire money for a deposit either.

There's a low risk for women coming to Redding, provided they practice all basic safety steps. Over the past five years, on average, rape reports are down but there were still 67 reported in 2020.

I like that the city of Redding is very transparent and upfront in its annual report about the state of the water and the big concerns. It reads, in part, "Last year your tap water met all U.S. Environmental Protection Agency (USEPA) and State drinking water health standards. However, five of the ten Enterprise groundwater wells, which are operated approximately six months out of the year, did exceed the maximum contaminant level for manganese, which is a secondary drinking water standard." You might choose bottled water here, but there's a low risk in tap water.

Safest Places to Visit in Redding

I don’t like to use the word quirky, but the city of Redding does, so we’ll go with that.

The downtown area is quirky while still offering a laid-back vibe.

You can stroll through streets filled with boutiques and restaurants while live music fills the air.

If you’re lucky, you’ll be there during a food truck rally and get to sample a little bit of everything.

One of the most Instagram-worthy shots is at the Cascade Theatre in the downtown area.

The theater first opened in 1935 and hosted numerous shows and events.

A renovation brought the theater back to life while still keeping intricate historic touches.

The Turtle Bay Museum seems like a lot of fun and there’s something for everyone.

It’s hard to describe what it actually is, so I’ll let the Turtle Bay team explain this.

As they say on their website, “The Museum at Turtle Bay is where art, science, history, forestry, and horticulture meet with permanent exhibits about our region and changing exhibitions from around the world.”

While you’re at Turtle Bay, you have to walk across the sundial bridge over the Sacramento River.

It’s free and open to the public every day of the year.

To get away from it all, you have Lassen Volcanic National Park (don’t worry, it’s not an active volcano) and Whiskeytown National Recreation Area.

Both options offer fishing, hiking, skiing, snowshoeing, and snow camping (in the winter).

Places to Avoid in Redding

If Redding was the face of a clock, draw a line between the 5 and 11.

That line follows the areas with the most crimes in Redding.

Redding Police provide an interactive crime map so you can check more recent crimes in any given area.

About 500 people live without shelter in Redding, and while the city is working to provide mini-shelters for them, for now, they camp where they can — and Churn Creek is a road known for the homeless.

You might also get asked for money downtown, but it’s not enough of a deterrent to make you avoid going there.

There are drugs in Redding, as with any other city, but drugs and gangs don’t run the city.

Many people would tell you to avoid Redding between June and September.

That’s when the heat fires up.

If you do visit during this time, make sure you have a car and a place to stay with working A/C

A swamp cooler isn’t going to cut it with the intense heat here.

The heat comes from a natural event called adiabatic warming.

This is when the air coming down the slope of a mountain heats up as it moves.

Redding gets this warming phenomenon on three sides of the city, leaving a sweltering hot mass of air sitting on top of it.

It’s just unusual for a place so far north in California to get THAT hot each summer.

Safety Tips for Traveling to Redding

So... How Safe Is Redding Really?

You just can’t expect too much from Redding.

When people think of a California city, the first things that come to mind are beaches and the ocean.

There have even been many initiatives to split California into two states because the energy is so different between north and south.

Redding is a conservative town, so avoid any political debates.

This is a part of the country where you aren’t going to change anyone’s mind about their conservative views.

While the crime rates are higher than many cities of its size, no crime sprees are running rampant.

Visitors will mostly come here to see the outdoors, and there’s little crime in wilderness areas.

There are just other hazards the higher up in elevation you go (see “Bears, Mountain Lions, and Rattlesnakes” above).

“Think of a mid-town suburb with no city in the middle of it and that’s about what you’re looking at.”

Redding is safe for travel, yes REALLY, but there’s still more crime than there should be.

If you just follow basic safety steps like locking your car, staying away from unknown neighborhoods, and keeping your purse or wallet close and secure, you should be just fine.

How Does Redding Compare?