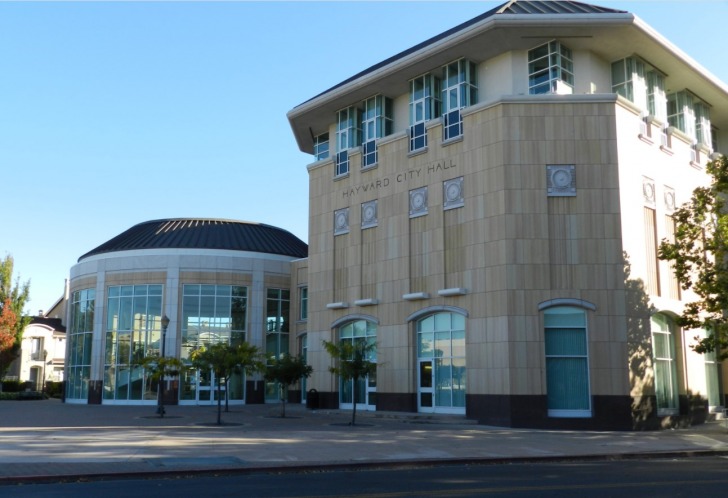 Welcome to the Heart of the Bay in Hayward, California, given that nickname for being centrally located to all of the big cities in the San Francisco Bay area.

I’m going to get ahead of this topic that you might have questions about regarding Hayward.

There is a fault line named after it.

One that runs right through the center of Hayward.

There hasn’t been a major quake on this fault line in more than 150 years.

Unfortunately, history shows this fault line has a major quake every 150 years on average.

That doesn’t mean you shouldn’t visit, it just means you need to be aware of earthquake safety.

Hayward is home to nearly 163,000 people and is among the more affordable (by Bay Area standards) parts of the region.

One of the other bonuses on this side of the bay is water on the west and mountains on the right with a lot of city stuff to do in between.

There’s just something for everyone in a diverse community that’s growing.

There's low overall risk if you are good at protecting your personal safety and making smart choices. Some of these California cities are tough to grade because, for one person who grew up in a small town, it might feel very unsafe. For people like me who grew up in big cities, it's part of life to have a certain amount of dangerous crime. Know this is a bigger city in a HUGE metropolitan area, and it's going to have certain risks with many rewards.

If you rent a car while you're here, budget money for parking and time for traffic. You also have Bay Area Rapid Transit (BART) and AC Transit as public transportation options. There are taxis and rideshares too. All those rides have a low risk, provided you aren't lost in your mobile device while wearing earbuds, going deaf and blind to the crowd around you.

In the lot of 2850 larcenies, 41 pickpockets or purse snatching don't seem like a lot. You'll have a low risk if you keep cash out of sight, put your wallet in your front pocket, and don't carry around a big, bulky purse.

We talked about earthquakes earlier, which are just always going to be an ongoing risk here. Tsunamis, flooding, and wildfires are also risks. While not very common, they are still big risks. Due to potential severity, we're going with a medium risk here.

The robbery rate in Hayward is almost double the national average, and highway robberies totaled 40 of the 253 robbery reports. There's a low risk, but if a mugger does approach you, don't fight back. Don't risk your life for your stuff.

The Bay Area in its entirety is a medium risk with a high population, tech giants located there, and a military presence. It is also highly protected, so you can feel a bit more confident knowing that.

The Hayward Police Department lists a bunch of scams people should be aware of, but none of them target a tourist. They are all focused on scams against locals. There's a low risk.

The crime numbers are pretty consistent across genders, so there's no overwhelming fear a female traveler should have. This isn't a place where you should be in a strange neighborhood at night or be walking around alone after dark, so if you follow that guidance you'll have a low risk here.

The utility company is in full compliance with tap water and there's a low risk of using it. California is in a drought and water conservation is just as important as water quality.

Safest Places to Visit in Hayward

Hayward has plenty of outdoor options and beautiful year-round weather, so let’s start there.

Explore the Hayward Regional Shoreline where the salt marshes once harvested for salt production are now in their natural state.

There’s a five-mile trail right along the water for morning runs or afternoon walks.

Five Canyons Open Space is a great way to explore several of the natural areas west of Hayward, which you can do on foot, bike, or horse.

You’ll see nearby cattle grazing the land and enjoy scenic rolling hills as far as the eye can see.

While you’re on that side of town, visit the Hayward Japanese Gardens.

The traditional art of a Japanese garden is more intricate than it might appear at first glance, so it really takes time to notice the specific details here.

Southland Mall is a good place to go shopping if you’re looking for a traditional American shopping mall experience.

Downtown Hayward has some shopping and dining options as well, but the real attraction is the mural art that started as a graffiti deterrent but has turned into a point of interest.

Buildings, schools, utility boxes, and even overpasses are decorated with unique work by Hayward artists.

Could you find them all?

Places to Avoid in Hayward

If you are going to find all the murals, do it with a map of the locations during the daytime.

This isn’t a city where driving around haphazardly at night is a good idea.

Stay on main roads, in well-lit areas, and bonus if you see surveillance cameras at the businesses you are visiting.

Crime maps show the incidents are spread pretty evenly throughout the city, with a noticeable increase along Mission Boulevard.

It’s a tough city, yes, but it’s not a crime-ridden one.

California drivers can be especially aggressive and you don’t want to go flipping the bird or shouting through your window at a driver here.

Avoid any confrontation about driving.

Avoiding being in a rush is a good idea too.

There is a lot of traffic in Hayward any time of day since it’s so centrally located.

San Jose, San Francisco, the Silicon Valley, and the far inland East Bay are all just about 45 minutes away.

Safety Tips for Traveling to Hayward

So... How Safe Is Hayward Really?

When I respond to this question, it generally comes after researching all the crime statistics from the past decade and then researching hundreds of threads on social media.

That generally helps me get a great picture.

Hayward is a mixed bag.

It’s one of those cities where most people are considering moving to get away from the high cost of living on the other side of the bay.

It’s also one of those cities where those same people want to know “is it really as dangerous as I’ve heard?”

There’s a caste system among residents in this region.

It starts with San Francisco’s elitists who can’t fathom living anywhere else, and it trickles down to the Silicon Valley neighbors and then seeps into San Jose and the East Bay region.

People go to East Bay cities like Hayward to get a bigger house for less money.

They brave long daily commutes so they can live in something larger than a closet.

Some of the elite might not think much of the East Bay, but the people who live there generally love it, and anyone who doesn’t quickly goes back over the bridge.

When you’re searching for answers, look for real estate videos on YouTube.

The agents are pretty transparent about the pros and cons of an area that is great for tourists to learn.

In that spirit, here are my pros and cons for Hayward:

How Does Hayward Compare?