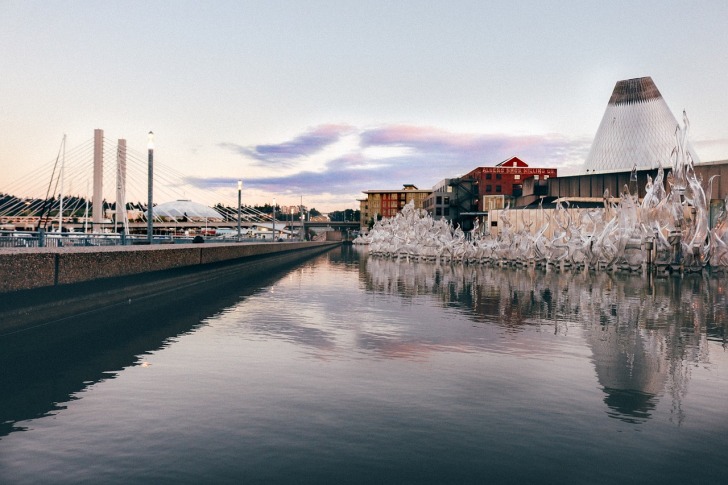 Tacoma, Washington is a mid-sized city located in the Puget Sound region of the Pacific Northwest.

It is a backyard wilderness with a reputation for being well connected.

Convenient access to the west coast, including Seattle, Canada, Oregon, and California, make Tacoma a great kicking-off point for any travel plans in the region.

A lower cost of living creates a more welcoming environment for Tacoma visitors in comparison to the higher-priced Seattle.

As a result, most of the residents living in Tacoma commute to Seattle to work, or choose to work from home due to the pandemic.

For travelers coming into Tacoma, there is a great number of outdoorsy things to do, including hiking in mountain passes and exploring ancient growth forests.

Year-round, hiking is abundant, and when spring weather warms the region, everyone loves to get out on the water.

The Puget Sound is a crystal clear ocean current that has minimal waves and plenty of wildlife.

Everyone enjoys watching sea lions and orcas out in the wild of the Puget—right from the banks of Tacoma.

At the same time, you want to stay safe when exploring the Great Outdoors, especially if you are in a new city.

So, is Tacoma safe for anyone wanting to travel there?

The Tacoma Crime Index by City-Data.com was 508.2 in 2019 compared to the US national average of 270.6. This makes Tacoma twice as dangerous in comparison to the majority of other cities around the nation. As a result, this puts visitors at risk, and caution should be used in certain situations.

If you need public transport, there is Pierce Transit and Sound Transit providing bus and train transit on a limited daily schedule. Additionally, third-party taxis from Uber and Lyft, as well as taxi companies, all run in Tacoma. Taxi and for-hire drivers must get a business license in Tacoma and this includes Lyft drivers. For anyone driving into Tacoma, in 2019 there were 1,626 auto thefts, up from 743.7 in 2018, according to City-Data.com.

Travelers to Tacoma do want to be aware of pickpockets. The following City-Data.com statistics support this: • 1,250 assaults up from 571.7 in 2018 • 1,768 burglaries up from 808.6 in 2018 • 422 robberies up from 193.0 in 2018 • 8,021 thefts up from 3,668 in 2018 Wear outdoors-ready clothing with hiking boots along with a rain jacket to protect your identity if you come in as a tourist. This is the typical PNW fashion and you can easily fit in and better avoid pickpockets. Most locals, including in Seattle, carry personal pocket knives for protective purposes while in the city.

The nearby Mount Rainier is actually an active volcano that is likely to erupt at any time. The mountain is easily visible from many places in Tacoma and reachable within a 1.5-hour drive southeast of the city. If this happens, the city will be covered in mud due to lahars and debris flows, wiping everyone out. Otherwise, based on its location in Puget Sound, Tacoma is not at risk for tsunamis or flooding. Mudslides from too much rain are more likely to cause natural disasters. Also, the occasional deep and heavy slow fall on the Cascade Mountain Range covers Tacoma and shuts down the city. Earthquakes are also a threat to Tacoma, where the historical activity is 1,372 percent greater than the national average.

In terms of acts of terrorism, the city does not experience a lot of rioting or international terroristic activities. However, the rates of arson were 91 in 2019, an increase from 41.6 in 2018. The nearby Joint Base Fort Lewis-McChord is only 9.1 miles south of Tacoma. Also, the US Military provides local jobs and resources through service in the US National Guard.

If you are concerned about being involved in a scam while in Tacoma, there are a few areas of theft to contend with: • Auto thefts are 1,626 up from 743.7 in 2018 • Thefts are 8,021 up from 3,668 in 2018 However, if you stay socially distanced and minimize contact with individuals and business owners, you reduce the risk of being scammed.

According to Tap Safe, Tacoma tap water was last composed in 2014. Now, from 2018 to September 2021, the Tacoma Water Division has had zero violations. Tap water is safe to drink, but purification at home is recommended.

Safest Places to Visit in Tacoma

Tacoma, Washington is located on the Puget Sound and situated on the northern end of a peninsula.

The North End of Tacoma is considered safer as it contains a higher value, historical homes, and more walkable city streets.

Beach access here is abundant and the sea waters are filled with orcas and sea lions, as well as the world’s only giant red octopus and squid.

In the park is Owen Beach, which is currently closed, but when opened it is also a great place to sit and view the Sound and neighboring islands.

Also in the North End, Point Ruston is the premier neighborhood for college kids, families with small children, and dog owners.

Here you have the Museum District of Downtown Tacoma.

Tacoma has the greatest concentration of museums in the state, even more than Seattle.

If you are in the South End, which can be less safe, there are free blueberries at Charlotte’s Blueberry Park off of Pacific Avenue.

You can pick blueberries in the summer months to eat.

Placess to Avoid in Tacoma

If you are traveling to Tacoma, generally you want to avoid the South End.

Here you have more blue-collar neighborhoods and crime, as well as fewer shops and things to do for tourists who are on foot.

The busy Pacific Avenue travels south as a four-lane highway.

It is bordered by lower-income neighborhoods and niche shops and service providers.

The neighborhood of Hilltop is considered historically to be crime and gang-related.

The infamous Crips gang known as the Hilltop Crips came from this part of Tacoma.

While this was in the 1980s and 1990s, the area remains known for having violent crime and shootings.

Downtown Tacoma, including around the train station at Union Station, is somewhere to avoid hanging out, as drug dealers and the homeless tend to congregate there.

Typically, where there are construction zones in Downtown Tacoma, you want to stay away as this tends to attract these types of individuals.

The dock area in New Tacoma underneath the bridge is another place where tourists and travelers should not be for safety purposes.

Safety Tips for Traveling to Tacoma

So... How Safe Is Tacoma Really?

Tacoma has seen its heyday of violence and criminal activity as one of the world’s most notorious street gangs has a home base here.

While Hilltop and the Crips do not necessarily represent themselves all over town, there remains the vibe that you do not want to explore certain parts of the city.

Historically, other violence has occurred here in Tacoma.

There was a serial killer named Ted Bundy who lived in a house in Tacoma growing up.

The home has been remodeled and up for sale many times since Bundy’s death, but previous residents report very strange accounts indicating he has never quite left the place behind.

Then, in the Eighties, two young girls in their early teens were abducted while riding their bicycles on Five Mile Road in Point Defiance Park.

Michella Welch and Jennifer “Jenni” Bastian were murdered and their bodies recovered, but it took nearly 30 years for the murderers to be identified and tried for the crimes.

As you can see, there is a lot of seedy and dangerous history of Tacoma.

Combine this with the latest City-Data.com information and you can see that the violence and danger remain.

So should you feel safe when traveling to Tacoma, Washington?

This is comparable to Seattle, which is 27.3 miles north and has a population of 563,374 residents.

Tech resources are there, making good sense of the title “America’s #1 Wired City” thanks to the services available.

You can work there and enjoy the scenery thanks to mild temperatures year-round.

So, while there may be a past that has a reputation for being downright dangerous in Tacoma, the city is not as dangerous today as it has been.

How Does Tacoma Compare?