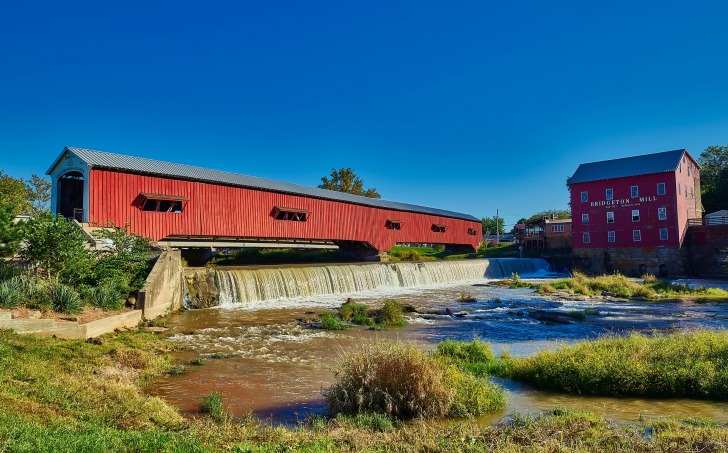 Indiana is not the biggest state, but it has a lot of contrast in the 250 or so miles from top to bottom.

The outskirts of Chicago are in the northwest corner, and Indianapolis is a big city in its own right in the middle of the state.

Beyond that, there are hundreds of small towns and many miles of farmland where the world is peaceful and quiet.

Indianapolis is a thriving city otherwise, with a lot to offer tourists.

Indiana is famous for basketball and the greatest spectacle in auto racing.

There is plenty to do and explore in this state.

It may not have majestic mountains or mighty rivers, but it has enough charm to hold the interest of most people.

Indianapolis has been a center of violent protests in recent times, and Chicago has a reputation for being violent as well. This makes the state only moderately safe, as there is some real danger out there. Indiana is in the middle as far as crime stats go among states. With some common-sense precautions, you should be safe there, but there are areas where it is not safe. Other than snow in winter, there is little danger from mother nature. Its level of safety has faded some in recent years.

The metropolitan area of Chicago extends into the state, and this area has excellent public transportation. Indianapolis has good transportation as well. Some other cities also have solid transportation, and there are some good options for buses and trains throughout the state. They are well regulated and safe for the most part.

Indianapolis is not known for this type of petty crime, and it is virtually unheard of in other parts of the state. Petty criminals try to find items unprotected instead of the more risky approach of taking something out of someone's pocket.

There can be some big snowstorms and ice storms in winter, but public services usually handle those well. These can be very inconvenient, but do not fall into the disaster category. The land is flat, so there are no earthquakes or volcanoes. There is the occasional tornado, but those are rare.

In Indianapolis, in certain parts of town, the risk of being robbed is high. The same is true for other large cities in the state. Even so, there are a lot of areas where this is not a problem. For the most part, it is relatively easy to avoid bad areas where there is a risk of being mugged.

Domestic terrorism is becoming a greater concern according to the Indiana branch of the FBI, with the rise of extremist groups on both the right and left sides of the ideological aisle. There are about a dozen threats per month, though most do not come to fruition.

Almost anywhere will have its share of con games and fraud attempts. People selling fake tours or selling stolen items are relatively common. Still, there is not a lot of this in Indiana.

Whether it is more dangerous for women is perhaps debatable, but women alone are at risk in high crime areas. People look for victims, and a woman alone can be a victim if she is out at night alone. There are also people who prey on women in bars, so women should be very careful about accepting drinks from strangers.

Indiana is rich in natural resources and water is plentiful. Cities have good water treatment centers and provide good quality water throughout the state. There are no known issues with tap water in Indiana.

Safest Places to Visit in Indiana

The northwest corner is rural with a lot of small towns.

There are interesting things to see here, and not much danger at all.

South Bend is the home of Notre Dame University and is a haven for artists along with a plethora of interesting museums.

They have a chocolate factory that is a must-see.

Bloomington is also a great city to visit with a low crime rate.

It has a great arts community as well.

There are more than 200 miles of biking trails in the immediate area.

Fort Wayne is 200 years old and seething with history, and it is a safe town.

Places to Avoid in Indiana

Downtown Indianapolis was once a bustling area with a lot to do and a safe area.

With recent racial turmoil and rioting, it has become much more dangerous and the area has deteriorated significantly.

The murder rate in Indianapolis is three times the national average.

There are several places in Indianapolis that are very dangerous, but it is still a nice place to visit.

Clarksville, at the bottom of the state, just across the river from Louisville, KY, has the highest crime rate in the state and is a good place to avoid.

Gary, which is near Chicago in the north, also has a high crime rate, double the state and national average for robberies and other violent crimes.

Safety Tips for Traveling to Indiana

So... How Safe Is Indiana Really?

Indianapolis is the most popular city in the state for tourists, but it is also one of the most dangerous areas of the state.

The crime rate is three times the national average in the capital city, but it should be noted that there are parts that are safe as well as dangerous.

Downtown Indianapolis has been the site of a lot of social unrest in recent years, as well as rioting, so some areas are not safe at all.

There are other areas of the city that are dynamic, safe, and fun to visit.

If you stay in good areas that are tourist-friendly, you should not have any problems.

Research before you go and plan accordingly.

Famous places like South Bend or Bloomington are pretty safe as long as you don’t go out at night alone.

At the same time, there are a lot of rural areas that are completely safe.

The northeast corner is fairly rural, as well as the southern part of the state.

These areas have a lot of wide-open spaces, and some nice state parks, where you can have a relaxing and safe vacation.

Some areas are dangerous for sure, but not more dangerous than any other major city in the United States.

With normal precautions and common sense, it is possible to stay out of harm’s way for the most part.

Even after having done your research, ask locals about bad areas once you get there.

They will give you current information that will be more accurate than anything you have found with a research.

Smaller towns are generally safe, and you are safe out on the highway for the most part.

Public transportation is good and safe.

Rental cars are generally reliable and safe as well, but it is still a good idea to check any car out before hitting the road.

State parks are very safe and great for recreation and camping.

The key to staying safe in Indiana is taking normal safety precautions and avoiding bad areas of various cities.

Check crime maps on areas you plan to visit.

General safety tips like these will keep you safe for the most part.

You do have to pay attention, but most trouble can be avoided if you are careful during your travels.

How Does Indiana Compare?