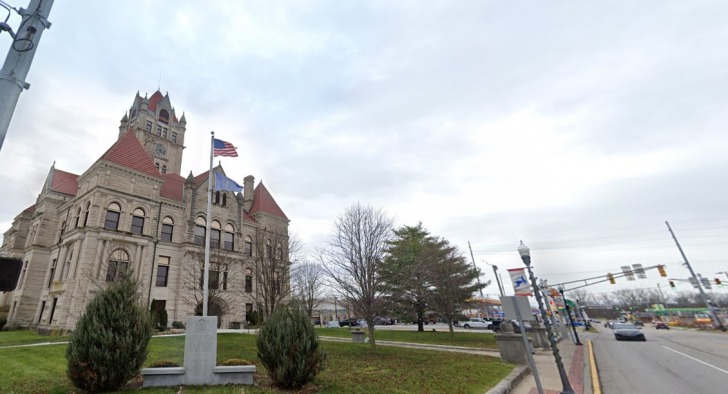 Believe it or not, the name of Rushville, Indiana, has nothing to do with local NASCAR racing legend Tony Stewart, who lived there during his formative race-learning years.

It’s named after one of the founding fathers of our country, Dr. Benjamin Rush, who died 37 years before Rushville even became a city.

Rushville was once poised to be a political powerhouse when Wendell Wilkie headquartered his 1940 presidential campaign here.

As we know now, incumbent President Franklin Roosevelt handily won the election, and a Wilke Presidency would have been a tragic one, as both he and his running mate died in what would have been near the end of their first term.

Unfortunately, Rushville hasn’t gotten any more exciting since those days.

The small town of 6,200 is rather proud of its slow rural lifestyle and is in no rush to become a bigger city.

In fact, the population has been down half a percent in the past decade.

The only hotel in town even boasts that it’s the “Quality Inn Near Amish Country.”

This is a city where the local festivals and events are going to fill your calendar more than any big tourist attraction.

The biggest gathering spot is Riverside Park, where an Amphitheatre brings in cover bands and such.

There's a low overall risk here where an Amish buggy is more common than a crime. The city had five violent crimes in 2020, and when I went to look at the violent crime in the county, I only found data as recently as 2012, and there were just two violent crimes in the whole county that year.

I was encouraged for a split second when I saw a Cab Company in Rushville. Turns out it was a Tractor Cab company that sells farm equipment. There's no public transportation here and no cab service centered around Rushville. It does appear that Lyft and Uber operate here, but there's no indication of how many drivers are available. There's a low risk you're going to find a ride if you don't have a car here.

This is another low risk. There were just 113 thefts in the city, which is actually a higher number than I expected.

All four seasons happen in their best and worst forms in Rushville. You're going to get winter storms, sometimes with dangerous ice. Spring brings tornado season and the risk for severe thunderstorms that last through the summer and fall. There can be flooding along the Flatrock River too. This is a medium risk because of the ongoing risks throughout the year.

There's a low risk here. Just one robbery was reported in 2020. I tried to find more information about that robbery by digging through old news articles, but it wasn't even a big enough deal to make the newspaper or local news.

There's a low risk and I shouldn't have to explain why because it seems quite obvious. However, it's just too small of a place with no notable landmarks that would lure a terrorist group in.

There is an incredible 2021 story in Vanity Fair about an FBI investigation into a Moscow, Indiana man who had an arsenal of artifacts, bones, and priceless items he kept in what was referred to as a nuclear missile silo underneath his home. The story is fascinating. The rest of this paragraph is not, because there's a low risk of a tourist being scammed or another FBI bust of this magnitude ever hitting Rush County again.

There have been no sexual assaults reported in Rushville in quite some time, and there's not a lot of other crimes that should worry female travelers. You should feel safe, if not bored, here with low risk.

The 2021 Water Quality Report shows all testing meets or exceeds standards. There were two violations in 2021 regarding a bacteria report in July and August. The tests were completed on time but were not submitted to the Indiana Department of Environmental Quality. They got a violation for both incidents but added a note saying the water tests did show full compliance, they just failed to report them correctly.

Safest Places to Visit in Rushville

Riverside Park is a great place to take in a show at the amphitheater and parking is free!

This is a great place to roam around during the day and get some great river views too.

Downtown Rushville is called the “Heart of Rushville” and there’s a Facebook page with that name that lists all the upcoming events.

Rushville isn’t dynamic enough to make the big tourism websites, but that’s why you’ve got us, right?

Here you’re going to find the hyper-local events are where the fun is and you’ll meet some of the nicest people you’ll ever know.

There are farmer’s markets and food truck events downtown.

The first week of July is the Rush County Fair and the city gets much more crowded during this time.

If you’ve never been to a county fair, it’s truly a fun time whether you’re into agriculture and livestock or not.

Look closely for “mutton busting” on the schedule, as little kids ride sheep and compete for the longest time on the animal.

Midget Races are a big deal here, and no, it’s not a race using a societally unacceptable word for a little person.

Some cars are much smaller than the NASCAR cars, but race just as competitive.

If you drive south on Highway 3, you’ll find some of the flattest lands you can ever imagine you’ll be able to stop at several Amish businesses along the way.

I lived in Sarasota for several years and there was an Amish section of town there, so let me tell you, you need to try Amish food and explore their homemade crafts.

The furniture is just exquisite and all one of a kind.

The pies and breads are delicious beyond belief.

Another great road trip is to find all the bridges of Rush County.

There are six of them still standing and these covered bridges make great Instagram stories or YouTube videos.

Placess to Avoid in Rushville

Rushville is way too small and too safe to have a “bad” part.

The whole city is a safe place to visit, but crime maps show the east side is slightly higher in crime rates.

That’s also the larger section of the city, so that makes sense.

As I looked for hotel options for you, I came across the Flatrock River Lodge.

Don’t try to make a reservation there.

There are a lot of wide-open spaces to explore here, so be sure you have a full tank of gas when you venture out and fill up as you see gas stations along the way.

Avoid getting impatient if you come across an Amish family riding a horse and buggy.

These vehicles have the same rights on the road as you do.

Even though they can’t go faster than 10 miles per hour, you should still give them plenty of room.

Don’t tailgate, and pass only when allowed by looking at the dotted lines in the center of the road.

Safety Tips for Traveling to Rushville

So... How Safe Is Rushville Really?

Rushville is a very small town with small-town crimes.

Theft is by far the highest crime category with 113 crimes reported in 2020 with each theft averaging a value of $3.

There were just five violent crimes.

This doesn’t mean there is never any crime here that makes headlines.

In late 2021, a suspect shot and killed a man in a nearby city and police chased him into Rushville.

At a gas station, Rushville police demanded the man surrender, and the suspect took a gun and pointed it at officers.

The officers shot at him with deadly force.

Many of the roads around Rushville are two-lane highways and a lot of semis use these roads.

That can be dangerous if anyone is driving distracted or under the influence.

In March 2022, a car traveling just south of Rushville crossed the center line and hit a semi head-on.

There are also a lot of factories around Rushville, and in May 2022, a fire at one of the factories sent a dark plume of smoke into the air.

I use these examples to show that while the crime rates are low and it seems like a safe area, there are always going to be dangers in any community.

These incidents are few and far between, however, but will always be the talk of the small town when they do happen.

How Does Rushville Compare?