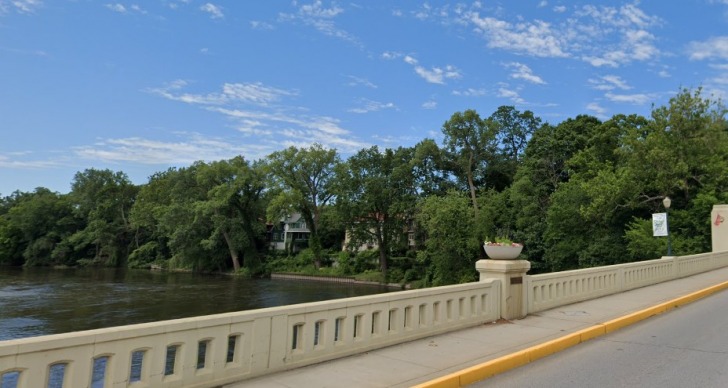 Load up the RV and let’s head to Elkhart, Indiana.

This is, after all, the RV Capital of the World.

80% of the RVs on the road come from this part of Indiana.

Elkhart is in the northern part of the state, near the Michigan border, earning this region the nickname “Michiana.”

The St. Joseph River cuts right through the “hart” of the city, making for great outdoor waterside activities.

There are several cities connected in this area, such as South Bend, Mishawaka, Granger, and Goshen.

Each one has its own flair and you’ll find sweeping landscapes of Amish County once you leave the cities.

The Heritage Trail is a huge tourist boom for this region, and it takes you along lazy roads and scenic spots in Elkhart County.

There’s even an audio guide you can use to explain all the interesting things you’re seeing.

One travel trip for this area is that a lot of places are closed or have limited hours on Sundays, so as you plan your trip, keep that in mind.

Sundays might be best spent relaxing by the river, anyway.

There are many reports out there that Elkhart is one of the most dangerous cities in Indiana. I've researched just about every city, and while the crime rate is higher than average, there are many cities far worse off. A recent uptick in gun violence in 2022 is leading me to give this a medium risk, but it's not as dangerous as nearby South Bend.

The Interurban Trolley is the bus system between Mishawaka, Elkhart, and Goshen (with plenty of stops at popular destinations). You can't get to South Bend using the trolley, but you can connect in Mishawaka to the TRANSPO bus service to South Bend. Taxis and rideshares are available. To enjoy this entire region, you should rent a car. I can't even imagine what an Uber cost would be on a Heritage Trail road trip.

There were three pickpockets in 2020, which gives it a low risk. However, this is the part I found interesting. The FBI lists the crimes with the average amount stolen in a theft crime. Purse snatchings were the second-highest value of all the items listed. The average take for a purse snatcher was $735 and one wallet was stolen with a value of $510. We can't stress enough that this isn't the place to bring your expensive purse or to carry around a lot of cash.

You'll have year-round risks here. Winter brings snow, ice, and sleet. Most of the time it's very manageable, but there can be blizzards or ice accumulations that stop all traffic in its tracks. Spring brings an enhanced risk of tornadoes with severe thunderstorms, and that risk lessons, but still exists, through the summer and fall. With the river in the center of town, there's a flooding risk too. All of this adds up to medium risk.

One-third of all robberies in Elkhart happen in public, and some of them are quite egregious. There was a robbery here caught on tape where two people beat a paralyzed man in a wheelchair because they saw money sticking out of his pocket. Because of the increase in violent crime, and the ruthlessness of robbers, we're giving this a medium risk level.

There's a low risk here unless a terror group suddenly grows a hatred of recreational vehicles. There are no military targets or large population areas here, and terror groups are more likely to target places like Chicago or Indianapolis.

There are plenty of phone scams going around Elkhart, but nothing that should concern a person visiting here. You should always be aware of the potential for new scams, and report any type of fraudulent activity to the police.

The sexual assault rate here is slightly higher than the national average. If you are visiting the wide variety of attractions here and staying off the streets by yourself at night, there's a low risk. You just really can't let your guard down here at all and never go to a private home with someone you have just met. 64% of violent crimes here happen in private homes.

The water quality in Elkhart meets or exceeds the required standards, but there was one violation in 2021. The nitrate test wasn't properly analyzed, leaving a gap in information about water quality at that time. The City of Elkhart says the issue has been resolved and steps have been put in place to avoid this happening again. There's low risk when using the water and kudos to the utility for being transparent about its mistake.

Safest Places to Visit in Elkhart

You can’t come to the RV Capital of the World without seeing the RV/MH Hall of Fame.

You’ll get to see the specific footprint Indiana had on the growing trend of recreational vehicles throughout the decades.

Be sure to stop by the gift shop for the RV lover in your life.

Even the kids have their own garden to explore.

During the holidays, the gardens are lit up in the spirit of the season.

Normally, I wouldn’t take you far outside of a city for a tourist attraction, but just 12 miles east is one of those “can’t miss” attractions for the region.

The Bonneyville Mill is a tourist attraction, historical landmark, and beautiful park all wrapped up in one stop.

The Mill is the oldest of its kind in the state and it’s open from April through November.

The park itself is open throughout the year and is a top cross-country skiing and sledding destination in the winter.

You can also go fishing here.

Check the calendar of events to see if there’s a festival or tour at the mill during your visit.

Back in Elkhart, it’s a bird.

No, it’s the Hall of Heroes Comic and Superhero Museum.

From one-of-a-kind superhero outfits to 60,000 comic books and original comic artwork on top of that, any superhero fan shouldn’t miss this unique stop.

Linton’s Enchanted Gardens is like a fairy tale made of flowers.

This is actually just a garden store, but this is far more elaborate than the flower section of Home Depot.

There are handmade fashion items and a restaurant on-site too.

A train takes the kids to a petting zoo or you can go mining for gems.

This is another great attraction open throughout the year.

One step into this museum and you’re back in the heyday of train travel when going across the country was a huge deal and the railroad paved the way for further exploration.

There’s really so much more to see in Elkhart and Elkhart County.

VisitElkhartCounty.com can help you better plan your trip.

Placess to Avoid in Elkhart

There’s a large chunk of the central part of the community that lights up when it comes to crime data mapping.

There really isn’t a super safe part of town until you get to the very edges of the city.

You can search the interactive crime map in the area where you are staying and places you want to visit on the Elkhart Police Department’s website to get a better idea of crime trends near your visit date.

You should avoid visiting the nearby cities without doing some research on them.

We’ve covered most of the cities and towns in this region, so the answers are just a click or two away.

This is definitely an area where a few miles can be the difference between a very safe city and an extremely dangerous one.

Safety Tips for Traveling to Elkhart

So... How Safe Is Elkhart Really?

Elkhart is one of many cities in Indiana dealing with a growing problem of gun violence and drug crimes.

The low-income levels in the city aren’t helping.

One of the growing trends is that a small population of criminals is causing the majority of crimes in cities.

It’s the same in Elkhart.

Another man took his own life in a Kentucky Fried Chicken after stabbing his girlfriend to death.

That’s the biggest risk for a traveler here is getting caught in the crossfire of one of these crimes.

You can lock your car, hide your wallet, avoid rough neighborhoods, and avoid walking around at night, but stopping at a convenience store or fast-food restaurant is just part of traveling and it should be a safe activity.

64% of violent crimes happen in homes, so there’s some assurance that public areas aren’t as dangerous as the data suggests.

Just 4% of the violent crimes were against strangers, so that helps ward off fears as well.

You just can’t let your guard down here, and if you stay alert, you’ll really enjoy the wide variety of activities Elkhart has to offer.

How Does Elkhart Compare?