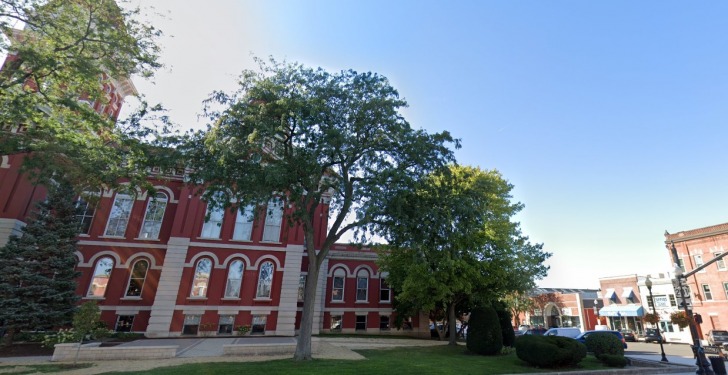 Never has a city been equally endearing and so infamous as Crown Point, Indiana.

This small town’s downtown square feels like a walk through a simpler time, until you realize you’re walking in the footsteps of gangster John Dillinger after breaking out of the “unbreakable” jail and running from the law in the sheriff’s own car.

Luckily, the safety ratings of this city have improved greatly since that fateful day in 1934.

However, not all evil has left this city as there are some places that are rumored to be haunted, bringing ghosthunters galore to look for messages from the other side.

As much as a tour of the old county jail can creep the bejeezus out of you, the county courthouse can leave you aghast with its stature.

There are several floors open for visitors to explore.

The town square has brilliant displays of sculptures from Marilyn Monroe to common activities like a man throwing away trash.

It’s worth finding them all for some great Instagram stories.

The American Discovery Trail comes through Crown Point and goes to Hammon, which is nearly 18 miles one way.

The Lake County Fairgrounds are in Crown Point and you can see the only covered bridge in the county here.

Crown Point is in part of the northern Indiana region known as the South Shore, giving a lot of nearby options when you run out of things to do in this small town.

One thing you won’t find here is a lot of hotels.

There’s just one in the city and the rest are in nearby Merriville.

There's a low overall risk and some crime categories are so low there's a better chance you'll see a ghost than become a victim of a crime. The only downside of reporting crime data here is there have been no official updates to the numbers since the data reported to the FBI in 2019.

The Gary Public Transportation Corporation provides bus service through this region with 11 routes. You can drive to Hammond or East Chicago to get the South Shore Rail Line to Chicago. I would avoid driving to Gary due to Gary's high crime rate. You can get a taxi or rideshare, but it might be a little longer to wait in this smaller town.

There's a low risk of being a pickpocket victim. The theft rate is 40% lower than the national average.

You're gonna face risks for winter blizzards and ice storms, spring severe thunderstorms and tornadoes, and flash flooding or extreme hot/cold throughout the year. There's low risk on an average day, but if any weather threats gets issued, please consider it a medium risk and plan appropriately.

There's really low risk with just two robberies reported in 2019. You should never let your guard down, but there are places nearby, like Gary, where that risk is very high.

There's a low risk here. The Chicago area would be the closest hard target, but you're far enough away here that there wouldn't be a huge impact.

The standard scammer poof calls to residents demanding money for bogus charges dominate here. There's no risk of tourists getting scammed, but a new one can always pop up. If you see someone you suspect of being a scammer, report to the police immediately.

Women should feel safe visiting here. There were no sexual assaults in 2019. There are a lot of places to stay in well-lit areas and it's clear where the things to do are and where there are just residential areas. It's not an easy place to get lost since it's so small.

The water meets or exceeds all required standards and has a low risk. The city is wrapping up some major renovations and additions to water storage and treatment to keep the quality of water good well into the future.

Park and start in the downtown square area, because there’s a lot to do here.

The “Grand Old Lady” is the nickname for the historic and stunning county courthouse.

This is also where the Lake County Historical Museum is located and there’s a gift shop as well.

The Old Jail & Sheriff’s House is the very location where John Dillinger made his great escape.

I don’t want to give away the storyline of how he managed to get out of an “unpenetrable” jail, because that’s half the fun of the tour.

There are tours during the daytime, but you can also schedule a night tour to get a ghostly look at the cells and see if any former prisoners are coming to visit you.

What I find particularly interesting is that directly across the street from the jail is a church.

There are a couple of brew houses here that are part of the South Shore Brewery Trail, and if you’ve never been to a meadery, you can try one in Crown Point.

Be sure to look for the sculptures that dot the landscape here, including a very impressive President Lincoln speaking while holding his hat up in the air.

Who’s the guy standing with Lincoln?

Ask around when you get there.

It’s technically called Southeast Grove Cemetery, but the nickname was earned nearly 200 years ago when gypsies came to town and were unceremoniously told to leave.

They were dying from the bitter cold and the flu but were left out in the open to suffer.

A spell was reportedly put onto the cemetery and some wild things have happened to people who have visited since (reportedly, of course).

Just six miles southwest, you can visit Lassen’s Lake and the museum located there.

There are steamboat rides on the water and plenty of other outdoor activities.

It’s like going back to the 1920s without having a time machine.

Places to Avoid in Crown Point

There isn’t much crime to speak of in Crown Point, but the highest concentration is in the city center area.

There aren’t places to avoid here or bad neighborhoods too dangerous to drive through.

In fact, this is one of those cities where driving around the neighborhoods can be a sightseeing event all its own with so many historic homes.

However, if you do find a neighborhood where something doesn’t feel right, just turn around.

You should avoid looking for the John Dillinger Museum, even though it pops up front and center on any Google Maps search.

The museum abruptly closed in 2017 faster than John Dillinger could escape it.

Despite the fact that it brought in tourists, provided revenue, and kept some people employed, there was no real reason given why it abruptly shut down.

Maybe by the time you visit there will be an answer you can post below in the comments.

I mentioned earlier you should avoid going to the rail line stop in Gary, and I strongly suggest you read our article about the summary of the crime data from there, which is more recent than 2019.

So... How Safe Is Crown Point Really?

It’s really hard to find a city safer than this, and it’s especially rare in Indiana, where gun violence and drug crimes are rising.

I went through the police department’s Facebook page for the past year and the biggest crimes reported were a found dog, a car break-in/fraud suspect, a burglary suspect, and a middling child who was eventually found safe.

The only caution I’d give is that you should never let your guard down, even in a seemingly safe city.

You should also glimpse at our reviews of other South Shore cities to see the crime rates there, and it can change from very safe to extremely dangerous in just a few miles.

How Does Crown Point Compare?