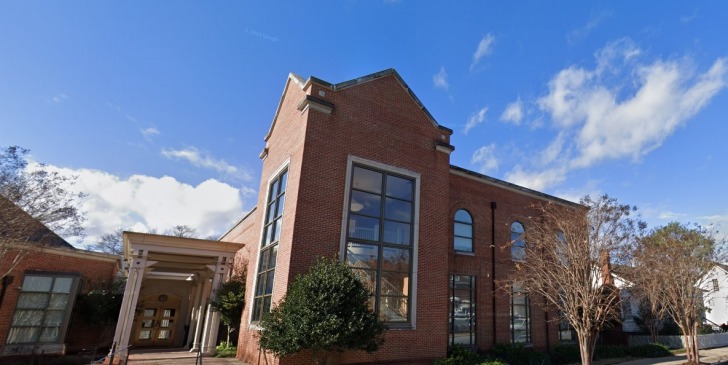 Newnan, Georgia is a city an hour southwest of Atlanta and is home to more than 42,000 people.

That could change before you get there because this city is growing at an incredible rate.

In the past decade, the population has increased by 22%.

The city is ripe with Antebellum architecture.

During the civil war, this city had a hospital that treated both Union and Confederate soldiers injured in the war.

Because of this generosity, Newnan wasn’t burned down by Union forces as many other cities were during the war.

That means many of the homes here are still the original homes, just renovated for modern times.

Newnan is so historical that they had to split up the districts.

There are six nationally-recognized historic districts in the city:

Fans of The Hunger Games, Walking Dead, and Insatiable will recognize some of the places in Newnan, as it has been a popular place for movie scenes over the years.

The Caldwell tanks were front and center in The Hunger Games: Mockingjay, but see them while you can as the rotted-out building could soon be leveled (if it hasn’t already by the time you read this).

You’re going to have to like history or the outdoors to visit it here because most attractions are focused on those two things.

This one is tough. This is a city mixed with mansions and mayhem, especially when it comes to the 2020 crime data, which is the latest available. The city's violent crime rate went up 60% in 2020. The theft rate dropped 24%. To answer this question as factually as possible, I had to go back to crime data of the past decade. It doesn't appear 2020 was an anomaly and there's a low risk, despite several other websites telling you it's one of the most dangerous in the state. I'll explain why I made that determination as we go along.

There's the Xpress system, which is a commuting bus system between smaller, outlying cities of Atlanta and the city itself. There's a downtown Newnan trolley that is free for everyone and runs rain or shine. You can also hail a cab or get a rideshare, but they aren't as plentiful as you'd find in Atlanta.

There was just one pickpocket in 2020 and the thief got away with $725. Remember, even in small towns, you need to keep your wallet and purse secure. Don't carry around large amounts of money or valuables when going on tours.

The city is still recovering from a March 2021 tornado that was a powerful EF-4 (the scale only goes as high as EF-5). One person was killed after having a heart attack while checking on his daughter whose home was destroyed in the storm. Suffice it to say, there's medium risk. This city can get hit by strong thunderstorms any time of year, but the worst usually comes in the spring.

There were 27 robberies in 2020 and six of those were in public spaces. That's really not a lot considering more than 42,000 people live here. There's a low risk, but the violent crime rate is also high. A robbery can quickly turn into a different crime category of assault if the two people fight during the robbery.

There's a low risk here. Nothing in Newnan is a hard target for terrorists. While Atlanta and the surrounding area are at medium risk, Newnan is far away enough not to share that concern.

There are some jury duty and tornado aftermath charity scams, but nothing that would directly impact a visitor. There's a low risk.

Women have a low risk of being a victim of a crime. The sexual assault rape here is about twice the national average, so use caution if you're meeting someone you met online or you meet someone at a bar or restaurant. Never go in private with strangers, no matter how charming they might seem in person. It's not advisable to walk around this city after dark alone.

Newnan gives the typical statement of "your drinking water meets or exceeds all federal and state requirements," which is a good thing. There's a low risk and you'll need plenty of that water with the high humidity levels here.

Safest Places to Visit in Newnan

Start at the McRitchie-Hollis Museum, home of the Newnan-Coweta Historical Society.

Here you can learn about the city’s history in a Neoclassical home loaded with artifacts from the past.

This is the quintessential Southern home of the 1800s.

Pick up a “Passport to Coweta County” so you can check off the historical sites as you visit them.

There are artifacts to view and African Americans can search their ancestry in the workroom.

There’s a cemetery next door that is one of the largest in the south.

Only slaves are buried here.

There’s also said to be a ghost of a previous owner who wanders the grounds of the museum.

She’s friendly and likes to play with children.

Oak Hill Cemetery has impressive headstones and sculptures of people dating back to the early 1800s.

There’s a self-guided brochure to review as you walk through.

Dunaway Gardens used to be a place for rehearsals for live stage performances and is now a tourist attraction with flowers and rock formations setting its own stage for peace and tranquility as people wander through it.

Banning Mills is a resort area about 20 minutes north of town.

It’s home to more adventures than most people’s adrenaline can handle.

There are a variety of zip line courses all leading up to “Screaming Eagle”, one of the longest zip line tours in the world, spanning 2500 feet long.

You’ll get up to speeds of 75 miles per hour.

You can buy the zip line tours by the ride or by the day.

Places to Avoid in Newnan

Crime maps show the highest crime areas are between I-85 and Alternate Highway 27.

It doesn’t mean avoiding that area, but just being aware of the higher crime section of town.

It’s normal for an area along major interstates or highways to have more crime.

There are gangs in Newnan, but Georgia has incredibly tough laws on gang activity.

The Georgia Street Gang Terrorism and Prevention act goes as far as to make it illegal for things like a gang “beat-ins”, even when the victim is a willing participant.

You most likely won’t be exposed to gang activity if you’re just visiting the tourist spots, but just know it does exist here.

When you’re visiting the historic downtown area, avoid going off the main roads.

Some of the neighborhoods in that area can be a little sketchy.

If you stay on the tour you should be fine.

Safety Tips for Traveling to Newnan

So... How Safe Is Newnan Really?

Newnan is a relatively safe city, but behind closed doors in 2020, there was a lot of crime going on.

Here’s a more in-depth discussion of that.

Even with the growing population, the violent crime average was pretty steady.

A few factors lead to this:

This might be due to fewer people being outside or in public and fewer theft opportunities.

There were six homicides in 2020 and all were connected to a killing spree by Nicholas Martez Nelson, who was arrested for the murders and associated crimes.

This is a rarity to happen in a town like Newnan, but a reflection of the increase in mass shootings across America.

Newnan just had a lot of anomalies in 2020, and unfortunately, 2021 crime data isn’t available yet.

Less than 60% of law enforcement agencies reported their 2021 crimes to the FBI, leading to data for only the largest cities being available as of spring 2022.

With a city like Newnan, you have to look at the trends of crimes over the past decade to get the best picture of its safety, not just in one year that had a lot of oddities.

Other safety websites don’t take the time to break this down for you, but we feel it’s important to give the data and the discussion of what led to that data.

Over the past decade, Newnan has shown an average amount of crime for a city that’s growing.

Most people there say they feel safe and there are some sketchy areas near the interstate and around downtown that probably aren’t desirable places to visit.

None of what happened in 2020 should make you less willing to visit Newnan.

How Does Newnan Compare?