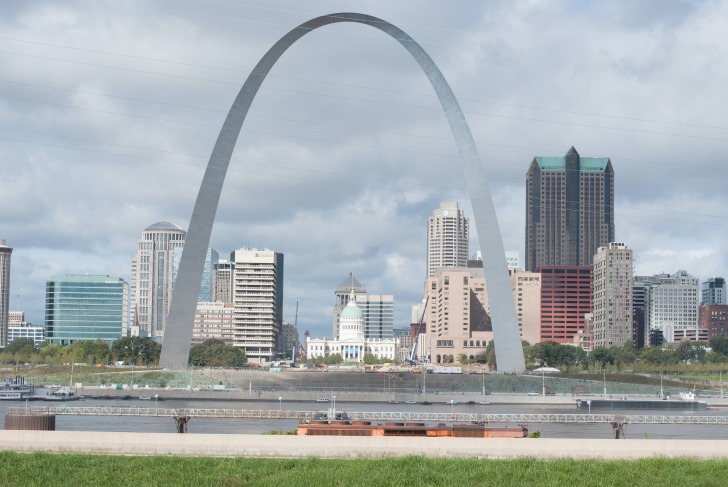 Missouri has two major cities, Kansas City and St. Louis, and there is a lot more in between those two that make it an interesting state.

It is famous for the great arch in St. Louis.

Branson, Missouri is a big country music center, the ice cream cone was invented at a world fair in St. Louis, and the state has more than 6,400 caves.

There are lots of small towns that have character, and there are a lot of state and national parks for exploring the outdoors.

St. Louis is famous for its botanical garden and its many museums.

Missouri is on the edge of the great Midwest and was the starting point for the Pony Express.

Kansas City is famous for its barbeque.

There is also a lot of culture and music to explore in the state.

Some areas are dangerous and should be avoided, but there are plenty of areas where you will not likely have any trouble.

There is some danger in the larger cities, and not as much in rural areas. St. Louis has the third most violent crime in the nation and there are areas in that city that should be avoided at all costs. Kansas City and Springfield were also in the top 10 for violent crime at the national level. The crime rate is not nearly as high in rural areas.

There are some pickpockets working in tourist areas in St. Louis and Kansas City. It is not a common crime, however. Most thieves look for things that are left unprotected. There are fewer pickpockets in general around the nation, but it does happen at times.

Missouri has a lot of tornadoes in spring and summer. There are also a lot of ice storms and general storms that create flooding at times. Most of these events can be predicted and there are warnings issued.

In certain areas of Kansas City and Missouri, the risk would be high. The big cities have areas that are unsafe any time of day. Tourist areas, and rural areas, are generally safe from mugging or robbery of individuals.

There have been very few acts of terrorism in Missouri. There is a concern, however, about radical militant groups that could do terroristic acts. There has also been a lot of rioting and looting in recent years during racial protests.

There are some scams aimed at tourists, but they are not common. Most scams are aimed at residents and elderly people, involving identity theft. As a tourist, if something seems too good to be true, there is likely something fishy going on.

Some areas are dangerous, but in general, Missouri is no more dangerous for women than it is for men. It is safe for women to travel alone, but there are areas where you should not go.

Water can get contaminated when there is flooding. For the most part, though, water systems are safe throughout the state.

Safest Places to Visit in Missouri

Missouri has 6400 caves and four state parks highlighting the biggest ones.

Branson is a country music hub, and Silver Dollar City is a huge amusement park in Branson.

This small town is in the Ozark mountains and is generally safe.

While St. Louis has a high crime rate, some of the suburbs and neighboring towns have a very low crime rate and are safe.

The same is true for Kansas City.

State and national parks are also safe, as well a the general countryside.

The Mississippi and Missouri Rivers cover more than 2000 miles each in the state, and the river has a culture of its own.

Columbia is a great cultural town.

Its crime rate is just above the national average, much lower than Kansas City or Missouri.

Jefferson City is the state capitol, a relatively small town on the Missouri River that has lots of interesting history.

Placess to Avoid in Missouri

St. Louis is a dangerous city in general.

There are a lot of interesting things to do, but you need to be careful.

Some areas are worse than others.

It is so dangerous it skews the stats for the state.

In St.Louis, one in 52 people will be a victim of a violent crime.

East St. Louis is across the river in Illinois but is one of the most dangerous areas in the country.

The downtown is relatively safe.

The north side of the city is the worst.

The Washington Wheatley area of Kansas City, near downtown, is very dangerous with a whopping 13,597 crimes per 100,000 people, including property crimes.

You have a one in seven chance of being a victim in this area.

Springfield also has a reputation for being a high-crime area.

The tourist area of Branson is very safe and it is a small town, but there are areas where property crime is common.

Safety Tips for Traveling to Missouri

So... How Safe Is Missouri Really?

Kansas City and St. Louis are great cities, but they have areas that are not safe at all.

Some places should not be visited even during the day.

There are also a lot of places in both cities that are very safe.

The high crime rate in St. Louis is much higher than in the rest of the state.

Even though Kansas City is relatively high, it is not nearly as dangerous as St. Louis.

You are four times more likely to be a crime victim in St. Louis than you are in the rest of the state.

There were 543 violent crimes per 100,000 people for the state, which is the highest in the Midwest and sixth-highest in the nation.

Cape Girardeau is also above the national average in violent crime.

Even so, the number of homicides was down a little in 2020 in the state.

Kansas City’s murder rate fell by 25 percent last year, but it is still above the national average.

Tourist areas are safe for the most part, but you should still not be out at night in unfamiliar territory alone.

As far as tourist areas, most crime is a matter of opportunity.

Thieves will check car doors to see if they are locked and will pass up a locked car.

Most of the crime is in the big cities and certain areas of those big cities.

It pays to be vigilant, but for the most part, Missouri is safe for travel.

Natural areas, such as state parks, are very safe with little crime reported.

You can safely explore trails and natural areas.

Watch out for wild animals, which can be a danger, but in well-traveled areas, there will not be many wild animals.

St. Louis is questionable because of the high crime rate, but the rest of the state is pretty safe.

While Kansas City and St. Louis have high crime areas, the suburbs are some of the safest areas anywhere.

Keeping your property out of sight, and secured, will keep you safe as long as you stay out of dangerous areas.

How Does Missouri Compare?