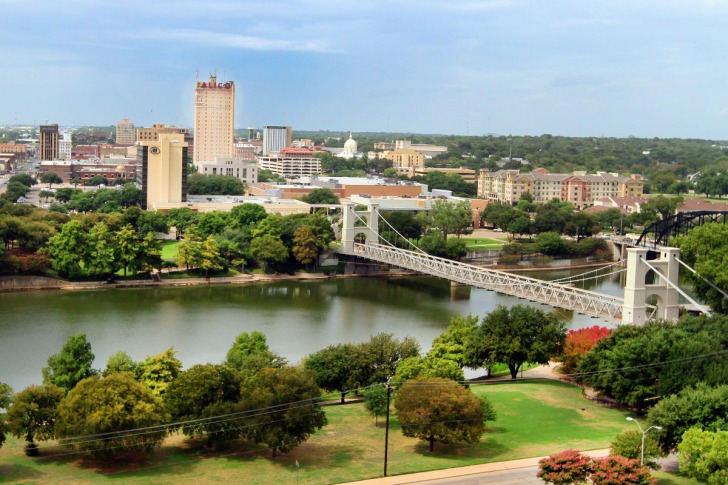 Waco, Texas, sits between Austin and Dallas on a major interstate across the eastern portion of Texas.

For some, Waco might just be a stop on a road trip to one of the biggest cities, but you’re missing out if you don’t take some time to explore.

Let’s be honest – Waco might stand out in your memory for bad reasons, like the Branch Davidian standoff and resulting deadly fire with the FBI or the historic tornado of 1953.

There’s also a history of brutal crimes against African Americans from the early 1900s, with the Waco Horror being a true story of a brutal lynching that makes my stomach turn even just writing those words.

(I recommend you don’t look at the details of that incident until you have a stomach of steel.

There’s just more to Waco than the bad stories that make headlines.

Lake Waco is a perfect spot to cool off in the Texas summer heat, and I swear it’s true – you can even surf in Waco!

The city’s blossoming food and culture scene are worth at least an afternoon of exploring, but there’s plenty to do here to fill up a week’s vacation.

From walking a suspension bridge from 1870 to exploring the origins of the city where Indians settled, this is a historic town that honors its legacy, taught valuable lessons and effected change from its mistakes, and has grown into a modern city while still capturing small-town Texas charm.

You might also be reading this article about the Eclipse Over Texas in April of 2024, so we’ll talk through some of that information ahead.

Just looking at crime data, it appears there is a firm medium risk. Violent crime rates are almost double the national average, along with property crime rates increasing. Very little of that crime poses a risk to a tourist at this point, so while living there comes with a medium risk - visiting is a lower risk.

Waco Transit is the public bus system, but there's also the La Salle Circle Shutte that goes around downtown and to the popular La Salle Street. You can just flag down one of the shuttles when you need a ride and the trip is free. Taxis, rideshares, and rental cars are widely available.

While the theft rate is high, the pickpocket rate is not. Just four were reported in 2021. You do have a much higher risk of your car being broken into, with 42% of all thefts being related. Catalytic converter thefts are an issue here too.

Severe storms and tornadoes are the biggest risks here. While the 1953 tornado is still one of the most damaging in history, that doesn't mean it's a rare risk. Tornado season is in the spring and late fall brings another seasonal risk. Wildfires, flooding, extreme heat, and the occasional winter storm are other risks.

The robbery risk is 25% higher than the national average, but there's also a low risk a tourist will be a victim. Only 13% of robberies were "highway robberies," which means it happened on a public street. Covenience store robberies were the highest risk in this category, so you might want to think twice before using a convenience store while getting gas versus going to a grocery store or restaurant for snacks or a restroom break.

There's a low risk here with more desirable potential targets for terrorists just 90 miles in each direction. You can still be vigilant and report anything suspicious because random mass shootings are just too common in the U.S. to be melancholy about the possibility.

The main scams here go after residents, with the typical threatening phone call or emails trying to get personal information or access to bank accounts. Some scammers will ask you to buy gift cards for payment in pressure situations, so that's a sure sign of a scam.

Women are only slightly more likely to be a victim of a violent crime, but the bulk of violence here is among gangs or domestic issues. You should use all the safety precautions as you would in any city, like not walking around at night alone, but there's not a looming threat to females here.

In an odd twist, Waco's water utility hasn't provided the 2021 or 2022 Water Quality Report on its website, so we can just go off of the 2020 data. That year there was full compliance and no violations. You can call the City of Waco Water Quality Lab at (254) 750-1662 to get more information closer to your visit.

Safest Places to Visit in Waco

WacoheartofTexas.com is the official tourism website for the city.

We recommend using sites developed by the city or tourism and convention bureaus due to the security of the website and the authenticity and objectivity of the information.

If you ever wonder who hosts a website, scroll down to the bottom and look at the copyright.

If you are visiting for the rare Total Solar Eclipse, the official website for that is: https://eclipseovertexas2024.com/ Start planning early because hotels, campgrounds, amenities, and cars will sell out early. The total eclipse also goes over Dallas, Austin, and San Antonio in Texas.

For fans of Chip & Joanna Gaines, Waco Convention & Visitors Bureau is hooking you up with a self-guided tour of places you’ve seen on HGTV’s Fixer Upper.

Email the convention bureau or stop by the visitors center to get your tour.

The Magnolia Market spans a couple of blocks with green spaces and shops.

Since the market is relatively new, it’s still expanding and adding new vendors.

I can’t get the old jingle, “I’m a Pepper, you’re a Pepper, wouldn’t you like to be a Pepper too?” as I write about Dr. Pepper Museum & Free Enterprise Institute in Waco.

From a taste of the carbonated beverage from classic soda fountains to a high-tech animation explanation of the drink’s invention, you can explore all the flavors of history founded here.

The other half of the museum is educational to learn about enterprising ideas, marketing, and business plans.

As if that’s not enough, VIP experiences include making your own soda or going on a haunted tour of the Dr. Pepper museum.

Driving just five miles will take you back to another era at the Homestead Craft Village.

Nearly 20 acres include a pioneer village of experience and exploration.

You can watch crafts being made, make your own or buy some of your own at the gift shop.

One of my lots in life as a travel safety writer is trying to make each zoo in every city sound exciting and non-repetitive.

The Cameron Park Zoo in Waco makes that easy.

You’ll get the same “animals from every continent” vibe here, but no attention to detail has been missed.

For example, moving into the Brazos River Country, you’ll walk through a sunken Spanish ship with an aquarium now built into it.

You can even schedule overnight events here if you’d like!

Before crossing Waco’s 1870 Historic Suspension Bridge, get an Instagram photo with the longhorn sculptures guiding the way.

There is a park at each end of the bridge.

NOTE: The bridge was closed for renovations, so when it does re-open it will be safer than ever! Be sure to check the city’s website before you visit, but it will likely be open again by the start of 2023.

Waco Surf Center offers a great chance to ride the waves in a landlocked city.

There are private lessons available for all skill levels, or you can just chill at the beach or sit at the tiki bar.

Places to Avoid in Waco

The northeast side of the city has the highest crime rates and is where the most violent crimes happen.

However, you’ll also notice that’s where a lot of the tourist attractions are.

Here’s the deal – stick to the main roads, don’t go into the neighborhoods (unless you are visiting a loved one), and pay attention to your surroundings.

Once you are out of downtown and north of the river, crime rates will increase.

However, you likely have little reason to be there anyway.

While illegal drugs are available in Waco, it’s the drug scene that is leading to a good chunk of violent crime.

While you should never use illegal drugs, don’t go looking for them here as that will raise your risk level substantially.

Also, for those visiting on a Visa, you’ll likely end up in an immigration facility until your case is tried.

That could take months or years.

The northeast side of the city has the highest crime rates and is where the most violent crimes happen.

However, you’ll also notice that’s where a lot of the tourist attractions are.

Here’s the deal – stick to the main roads, don’t go into the neighborhoods (unless you are visiting a loved one), and pay attention to your surroundings.

Once you are out of downtown and north of the river, crime rates will increase.

However, you likely have little reason to be there anyway.

While illegal drugs are available in Waco, it’s the drug scene that is leading to a good chunk of violent crime.

While you should never use illegal drugs, don’t go looking for them here as that will raise your risk level substantially.

Also, for those visiting on a Visa, you’ll likely end up in an immigration facility until your case is tried.

That could take months or years.

Safety Tips for Traveling to Waco

So... How Safe Is Waco Really?

Waco is dealing with the same problem many American cities are seeing – an influx in violent crime with a significantly elevated rate of homicides.

The police chief blames gangs, drug dealers, and domestic violence offenders for the majority of these.

Here’s a statement she made that should answer any tourist’s concerns about the homicide rate.

I don’t think we’ve had any that have occurred that have been random,” Waco Police Chief Sheryl Victorian said of the violent crime to local station ABC25.

To back that up, in 2021, just 8% of violent crimes happened against strangers.

48% of violent crimes happen in homes.

Only 13% of robberies were in the category most likely to impact a visitor or stranger.

The car break-in rate is 42% of the entire theft rate.

Be sure to lock your car when you park and leave the windows rolled up.

Don’t leave personal effects inside, either. Catalytic converter thefts have been a big problem here.

When renting a vehicle, ask about any proactive steps taken to prevent these thefts.

There are some tactics that can be used to limit the risk of being a victim.

The bottom line is this – if you aren’t a drug dealer, gang member, domestic abuser, or inattentive to safety issues, you shouldn’t see much of a problem during your visit to the heart of Texas in Waco.

How Does Waco Compare?