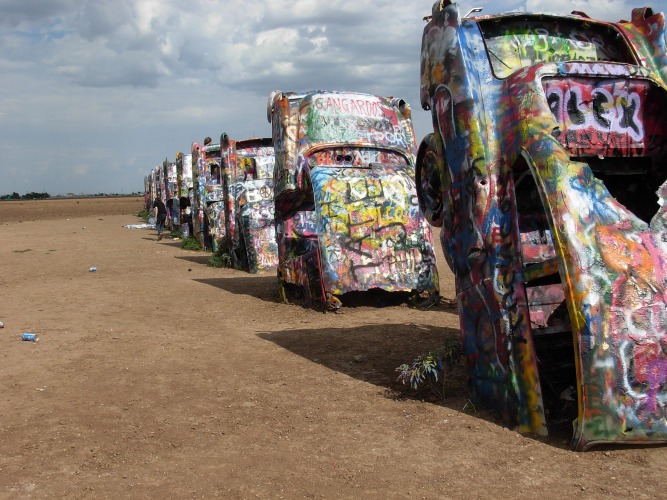 It was a key stop along historic Route 66 and remains a gateway to the old west.

Route 66 fans still flock to the area to enjoy the nostalgia and there are still many reminders.

It is often called the heart of Route 66.

Amarillo is cattle country and home to the Big Texan 72 ounce steak, which is free if you can eat it all.

Amarillo is at the edge of the prairie and the beginning of the western desert.

The city is less than half an hour from Palo Duro State Park, which is one of the biggest canyons in the country and home to many adventurous trails.

It is also home to the Cadillac Ranch, a series of half-buried cars that are covered with graffiti.

Amarillo is the headquarters of the wide-open spaces of the west where exploration begins and never ends.

Amarillo has a very high crime rate, but the tourist areas are pretty safe during the day at least. Texas is generally higher than the national crime rate, and Amarillo is higher than the Texas rate. There are a lot of natural areas around the town that are safe.

We give this a medium designation because of the lack of transportation more than the actual danger of being a crime victim. There are taxis from the airport, and there is a bus system that does not have a lot of routes. Outside of town, there is very little public transportation.

While theft is a common crime, pickpockets are not common. It is a crime that is fading as credit cards get harder to hack. There are not that many crowded places, which is where they tend to operate.

There can be tornadoes at times, but there have not been any in a long time. Drought is an issue in the area. Natural disasters are rare in this area.

Violent crime is an issue, and there are parts of town where your risk would be high of getting mugged. In the tourist areas, and better parts of town, there would be very little risk. Where you are at any given time has a lot to do with how dangerous it is.

Terrorists like large crowds and dense populations, and there is none of that in Amarillo. Domestic violence from local extremist groups is a concern, but so far they have not created any problems.

Scams in this area are generally over the phone, or online, targeting senior citizens with schemes to steal their financial information. There are very few scam artists going on out in the streets or tourist areas.

Women travelers are common, and even women traveling alone is fairly common. The rate of rapes is not above the national average as other violent crimes are. There is no indication it is any more dangerous for women than men.

Water from the city meets all state and national standards. Drought in the area has raised concerns at times about having enough water, but thus far there seems to be plenty for everyone.

Safest Places to Visit in Amarillo

The famed Route 66 remains a popular tourist destination, and it is very safe.

Many parts of the old road still exist and can be explored.

Route 66 is almost its own culture.

Palo Duro State Park is nearby and has lots of trails.

It is safe, but the heat of summer can make it dangerous, as snakes can too.

The northern part of the city goes for miles and is called Bishop Hills.

There are not a lot of people and there is not much crime or danger.

The south part of town is also a big wide open area with little danger.

The southwest areas are also areas with little crime.

The good areas of Amarillo are very good.

There seems to be a good bit of contrast in the good and bad areas.

Places to Avoid in Amarillo

The very west part of town, along the Interstate 40 corridor, are the most dangerous areas of town from a crime perspective.

Route 66 goes near 40 all through town and it is safe, but it gets more dangerous near the Interstate.

The middle of town, north, and south, is a big stretch of area that has a high crime rate.

Broadway, from first to 10th Ave are also very violent areas that should be avoided.

Broadway goes north to south and has bad areas on the entire route.

The San Jacinto area has a lot of poverty and also has a high crime rate.

The bad areas of town should be avoided as that is not where the points of interest are in the city.

The area around the airport has a high crime rate as well, but it is hard to know if that is because few people live there, and a few crimes would raise the rate a lot.

Safety Tips for Traveling to Amarillo

So... How Safe Is Amarillo Really?

Amarillo is a city of contrast, and a lot depends on where you are.

In some ways, it is a very safe city, but it does have a high crime rate.

Both are true at the same time.

The area along Route 66 is very safe, just like it was in the early days of road travel.

The inner city, as well as the southwest side, are high-crime areas that are dangerous any time of day.

Those areas should be avoided as there are no points of interest there.

There are some places where Route 66 is beside I-40, and those areas are questionable at times, but in general, the old route area is very safe.

The crime rate shot up in the United States in 2020, after having declined for 20 or so years.

In 2020, Amarillo was the 27th most dangerous city in the United States as far as violent crime.

The national average is around 400.

The good news was that robbery and rapes declined, but murder and aggravated assault went up sharply to account for the 13 percent overall increase in 2020.

On paper, it is not a safe city, with only five percent of U.S. cities considered more dangerous.

Even so, the tourist areas are safe for the most part, and there are many natural areas around the city to explore that are very safe.

Keep in mind that it gets very hot in Amarillo, and the summer sun can be a real danger if you do not stay hydrated.

The heat of summer could be as big of a danger as potential crime could be.

How Does Amarillo Compare?