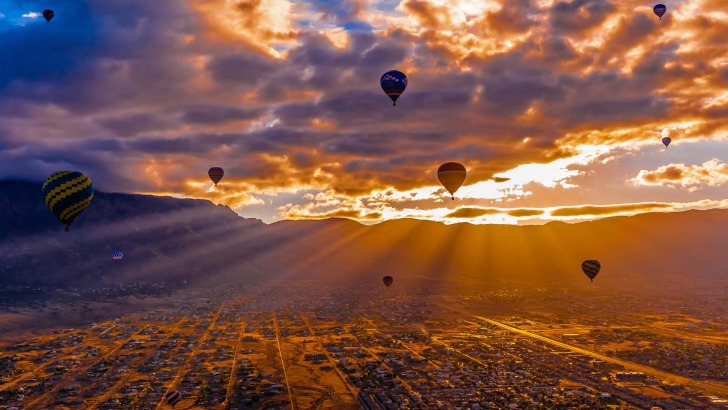 The hit show, along with “Breaking Bad,” made this high desert city even more tempting for visitors.

Albuquerque goes by many names – ABQ, the 505, and the most popular Burque (Boor-kay).

It’s a mix of Native American, Latino, and Hispanic influences.

The food is spicy, the nightlife is hot, and the outdoor adventures are sometimes full of hot air.

ABQ is the Hot Air Balloon Capital of the World, with the International Balloon Fiesta taking to the skies each October.

Another reason to look up?

The dynamic night skies with stars are so vivid you feel like you could reach out and touch them.

The city sits at a higher altitude than most U.S. cities, so you might need to take a day to adjust.

The famous Route 66 runs through the Burque, and it’s not just a derelict road here.

Neon lights the way with restaurants and attractions sure to tap into your sense of nostalgia.

The Buruqe has several distinct neighborhoods, including:

From ABQ, you are also three and a half hours to White Sands National Park and less than five hours to Mexico.

There's a medium risk in Albuquerque, but it's bordering on a high risk due to high crime rates. Violent crime has been on the rise in recent years, but property crimes have been going down. We will dig into the data to see how much crime rates impact tourists.

ABQ Ride is the public transportation system here with 40 fixed routes daily. Through June 2023, rides are free. However, it's important you know about some of the violent behavior reported and caught on camera on some buses. One bus driver said, "We’re dealing with mental illness. We’re dealing with alcoholism, drug addiction, homelessness – on every route, every day." The Route 66 bus to Uptown historically has the most violence. I can't recommend riding the bus, but if you have no other choice, use the utmost caution. Much of the violence is targeted at bus drivers. You can get taxis and rideshares here too, and rental cars are available. Overall, there's a high risk of riding the bus and a medium risk overall. Especially when you consider half of the thefts are related to car break-ins.

Theft rates have been cut in half since 2017. That sounds like good news, right? Kinda. The theft rate is still two and a half times the national average. There's a medium risk, even though pickpockets and purse snatching have also been cut in half over the past five years. Don't walk around with cash, and try to avoid carrying a purse if you can.

Wildfires are the biggest risk here. Even smoke from fires far away can impact air quality. Flash flooding is another risk, and you should never try to cross a flooded roadway. You might get severe thunderstorms here with an occasional tornado. There's a medium risk overall.

This is another medium risk. The robbery rate peaked in 2017, but even with a decline, it is still four times the national average. About 20% or fewer of the robberies are in public places.

With a strong military presence at White Sands Missile Range and Los Alamos National Laboratory, on top of the large population, there's a medium risk in Albuquerque and all of New Mexico. There's also a strong Homeland Security presence.

A recent scam exposed a man posing as a military officer to get money out of women through online dating apps. Fraud was up 64% in 2020, so there's medium risk. Avoid any "too good to be true" deals and never wire money or buy gift cards to pay someone.

The sexual assault rate is four times the national average, and women need to use a great deal of caution here. This includes avoiding being out at night alone. Always let someone know where you are going and when you plan to be home. Don't bring big purses out with you, and never take a drink from someone if you haven't seen the bartender make it.

Nearly 6000 samples are taken each year to test water for contaminants. The 2021 Water Quality Report shows full compliance and no violations in tap water. This is the only area that gets a low risk in all the safety concerns of New Mexico. Keep in mind that flash flooding could have an impact on water quality. If it floods when you're there, check with the city for any water issues.

Safest Places to Visit in Albuquerque

Tours are a safe option in the Burque, as you’ll be with a tour guide and a large group.

You can choose from various tours in the outdoor areas outside of Albuquerque, but one of the most popular in town is the Breaking Bad RV Tours, which takes you to some of the top filming locations for the hit show and follow-up Better Call Saul.

Another tour is available to see some of the broader scope of shows and movies made here, including Transformers and Avengers.

It’s also hard to find an unsafe spot in the skies, so take advantage of all those sunny days and ride a hot air balloon.

There are at least half a dozen options, but Rainbow Riders, Inc. is one of the most popular.

You can watch the sun come up or take in a romantic sunset.

Grab a self-guided tour map, and you can visit the area’s top attractions from the safety of your vehicle.

The Route 66 Tour is one of the most popular, and try to take the ride after sunset if you can to get the full neon-glow experience.

At the west end of Route 66, you can visit the ABQ BioPark Aquarium and go under the sea, then take a stroll in the beautiful Botanic Garden on a 1.5-mile path.

For a cultural lesson, plan a day between the Indian Pueblo Culture Center, the National Hispanic Cultural Center, and the Albuquerque Museum of Art & History.

There is so much history here.

Touring these centers will give you a stronger appreciation for the different communities around the city.

The Wildlife West Nature Park is a great place to see unique animals of this region, like javelinas.

There are more than 20 species of animals across more than 122 acres.

If you’d like, schedule an overnight camping trip at the nature park.

If you want to be rattled, take a few hours at the American International Rattlesnake Museum.

Hike in the summer, ski in the winter, and enjoy the natural side of New Mexico.

Petroglyph National Monument is another natural wonder to explore on the west side of town.

From ancient carvings on rocks to volcanic cinder cones, there’s a lot to see.

Stop by the visitor’s center to learn the figures so you can better read the stories told on the rocks during your adventure.

Places to Avoid in Albuquerque

Crime is widespread across the city, with the northwest side of the city having the overall lowest crime rate.

The highest crime neighborhoods are on the south and east sides, mostly south of I-40 and east of I-25.

The closer to the interstate, the higher the crime rate is in a neighborhood.

The city also has a Traveler Safety section on its website and a dedicated phone number from Albuquerque Crime Prevention.

You definitely want to do as much as possible during the day and limit nightside travel to the tourist areas like Route 66.

Never travel alone at night, and take taxis or rideshares instead of walking whenever you can.

If you are visiting for the International Balloon Fiesta, book your reservations as early as possible so you can get into a safer part of town and avoid driving long distances.

One additional note – there is a Las Vegas in New Mexico, but it is not THE Las Vegas.

“Las Vegas” translates from the Spanish phrase for “The Meadows,” so the name has nothing to do with gambling, even though the name Las Vegas has become synonymous with that.

Safety Tips for Traveling to Albuquerque

So... How Safe Is Albuquerque Really?

Albuquerque, by and large, isn’t a safe city.

It has high crime rates in all categories, even the ones that are dropping.

The main concerns for a tourist will be car break-ins, petty theft, and robberies.

Car break-ins account for nearly half of all thefts, so you need the best safety practices you’ve ever used with a rental vehicle or personal car.

There’s less of a risk that a tourist will be a victim of a violent crime, but you just can’t let your guard down here.

I’ve driven myself through Albuquerque several times in my life, both times with a pet in tow.

I can say I never felt the imminent threat as I stopped for breakfast on my way out West, but I also chose specific locations.

For example, I saw a couple of police officers at a gas station, so I stopped to get gas.

I noticed a restaurant in a non-busy area, and I ordered there instead of going to a more crowded part of town.

There are so many amazing things to do in ABQ, but you must be constantly aware of your surroundings.

As much as possible, take in the events during the day.

Leave the “party time” for another city, just to be safe.

How Does Albuquerque Compare?