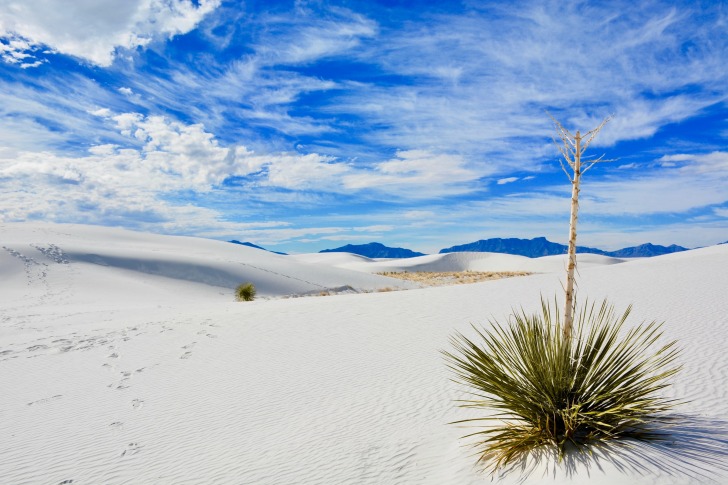 New Mexico is called the land of enchantment.

Much of it is desert, but it’s a beautiful desert with a lot of interesting things to see.

New Mexico is the fifth-largest state in size, but 37th in population, so it is one of the least densely populated states in America.

If you want to get away from it all, you can do so in New Mexico.

Albuquerque is a big city that has a lot going on.

You can also explore extra-terrestrial conspiracy theories in places like Roswell.

Native American culture is strong here as well, and there is a lot of interesting history to explore.

Carlsbad Caverns and White Sands are two national parks that are major attractions.

New Mexico is pretty safe too, partly due to a small population.

There may be more natural dangers than dangers from other people.

New Mexico is a rural, sparsely-populated area and that may skew the stats somewhat. Crime per 1000 people is well above the national average in many areas, but is that because there is a lot of crime or because there are few people? The number of crises is low. New Mexico has one of the highest crimes per thousand rates but has the fewest number of crimes of any state. There are a lot of safe areas and general precautions should keep you safe.

There is a good bus system in the state, and major cities. A light rail offers service between Albuquerque and Santa Fe. Public transportation is used a lot and is safe. There are taxis from the airport which are licensed and safe. Smaller towns and rural areas do not have taxis and may not have bus services.

There has been a rise in pickpockets in Santa Fe recently. Crime is not as common as it used to be, but it still exists in tourist areas. In crowded areas, they are more likely to strike. The most common crime is where someone picks up something that someone has left behind, or left unlocked.

There are not many natural disasters in New Mexico. Weather can be inconvenient and disastrous for the unprepared, but there is little risk overall.

There has been a slight rise in this type of crime in the Santa Fe area, but overall there is little risk of being mugged in New Mexico. The rate of violent crime is high, but the overall number is not. Tourist areas rarely have this sort of violent crime.

Sparsely populated areas like New Mexico rarely have terrorists. There is a growing concern about domestic terrorism from extremist groups, but they are rare in New Mexico.

In tourist areas, there might be an odd fake tax or fake ticket for sale, but this is rare. The most common scam is done by telephone, targeting elderly people giving out personal information that can be used for identity theft. As always, if someone presents a deal too good to be true, it probably is not real.

New Mexico is a liberal-type state and it is not uncommon to see a woman traveling alone. Even so, common sense should prevail. There are still some criminals out there, and no matter where you are, there are some places you should not go at night alone.

Tap water in New Mexico is very safe. It is a desert area, and there is a concern at times about having access to enough water for the population, but the quality itself is not an issue.

The safest place to visit in New Mexico could be the national parks, like Carlsbad Caverns or White Sand National Park.

There are also lots of beautiful state parks and other natural areas that usually do not have a lot of people around, and are safe.

Some public land areas are free for any kind of use – such as camping or general exploration – and these are safe.

Albuquerque is a large city but has a low crime rate in most areas.

Santa Fe has some bad areas, but the arts districts are very safe.

Small towns have charm and are interesting to visit as well, and they are safe for the most part.

Los Alamos is a small town that has an incredibly low crime rate.

Placess to Avoid in New Mexico

Rio Rancho is on the north side of Albuquerque and is the third-largest city in the state.

It is densely populated and has a high crime rate.

Deming is a rural town of 14,000, and it has one of the highest crime rates and has high unemployment and poverty rates.

It is rated as one of the worst places to live as well.

It is also close to the border.

Beland, Anthony, and Sunland Park are also towns with high crime rates and lots of poverty.

Very rural areas can also be dangerous for those not prepared.

There may be no help for 100 miles, and there may well be no phone signal either.

Santa Fe has a lot of great areas that are safe but also has some bad areas to avoid.

There are also quite a few Indian Reservations.

These areas may not be safe for outsiders, so make sure you have permission first before getting into their spaces.

So... How Safe Is New Mexico Really?

It is really hard to say how safe New Mexico is.

The small number of people makes the few crimes seem greater in a crime per 1000 people statistic.

New Mexico has the lowest number of crimes of all the states but has the highest crime per 100,000 people in the nation.

New Mexico also has the highest rate of car thefts per 1000 people in the nation.

New Mexico’s violent crime rate of 822 per 100,000, and its property crime rate of 397, are both more than double the national average.

Even so, the total number of crimes committed is well below the national average both for violence and for property crimes.

The overall murder rate has gone down some, but at 4.8 per 100,000 people, it is still above the national average.

In Roswell, you have a one in 17 chance of being a crime victim.

In Albuquerque, it is even worse, at one in 16.

Encanto Village, Quail Ridge, and Alta Monte are areas of Albuquerque that have bad reputations.

These are not tourist areas though, and there is no need to go there if you are just visiting the city.

Taos has the highest property crime level in the state, well above the national average.

These numbers make the state sound dangerous, but may not be all that dangerous in reality.

Many areas are completely safe.

Staying out of bad areas is the key.

While the crime rate may seem high, the total number of crimes is not all that high.

There are not a lot of reports of crimes specifically targeting tourists, but that can happen.

The remote areas are pretty safe because they are remote and there are not many people there.

Big cities like Albuquerque or Santa Fe, have their share of crime, but they also have security around tourist areas to keep them safe.

How Does New Mexico Compare?