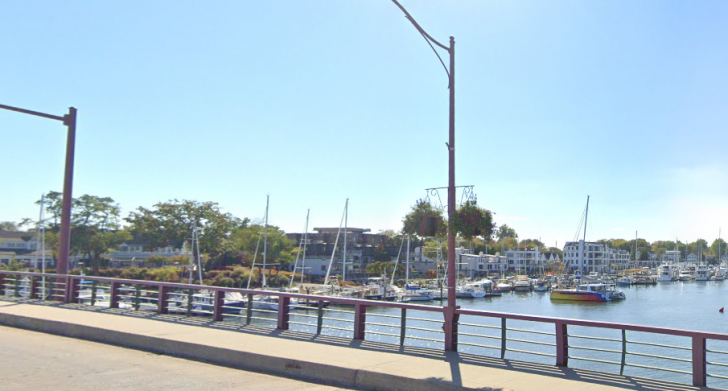 Annapolis, Maryland, is known for being the home of the U.S. Naval Academy, but there’s much more to this Chesapeake Bayside community than that for visitors.

You might see references to Naptown while you’re here, as that’s the city’s unofficial nickname.

However, not all locals love that moniker, so don’t use it in regular conversation.

While the name suggests the city is boring, it’s anything but.

Sure, you can find plenty of beachfront locations to take a nap and even explore islands designed for the type of relaxation that induces a nap, but you’ll find there’s too much to explore to nap the day away.

Annapolis is also referred to as a Museum Without Walls, as the city is steeped in rich history you’ll feel from the first step on the brick-lined streets of downtown.

You can explore hundreds of years of history, have the best crab cake of your life, and sail at sunset.

That doesn’t sound boring to me!

Hotels are spread out in this region, with your standard big-name hotel chains to resorts on Kent Island and plenty of bed & breakfast inns between them.

The city is also an hour from Washington, D.C., and 30 minutes from Baltimore, so you can enjoy the beach and the big city all in one day.

Chesapeake Bay is one of the top draws here, with plenty of small towns and scenic views to enjoy.

Annapolis is a fairly low-risk city, much safer than Baltimore's high-crime areas. While crime rates are slightly above the national average, the surge of violent crime across America hasn't hit this city quite as hard. There are plenty of things to do here in safe areas too.

Annapolis Transit has a Rainbow Route that makes 180 stops through the busiest parts of the city, likely including your hotel. A shuttle can also take you directly to and from Upper West Street to Downtown Annapolis. Water taxis are available for rides across the bay. You can also get taxis, rideshare, or a rental car.

Eight pickpockets were reported in 2021, most of them around busy shopping areas. Be sure to limit what you bring with you and keep wallets in the front pockets of jeans or in hidden jacket pockets.

Annapolis can - and has - been hit hard by severe weather. Hurricane Ian in 2022 spawned some tornadoes in this area. Hurricanes are also another big risk from June through November. Severe thunderstorms and winter storms can happen too. Flooding is another big risk. While nothing is out of the ordinary, if you aren't used to hurricane safety, please review the emergency management plan for the city.

There's a lower-than-average robbery risk here, with 23 reported in 2021. Nine of those were in the downtown area. You can feel safe there isn't an overwhelming risk, but use extra caution if you're out at night.

This region gets a medium risk because of all the potential government and military targets. Annapolis also has an extensive amount of security due to the presence of the Navy Academy.

Maryland ranks in the top 3 states for scams, but most of those target residents. There aren't any prominent tourist scams, but never let your guard down. Even someone approaching you who seems nice could really be a decoy for a thief or have an elaborate scam underway.

Women shouldn't have additional concerns from the general tourism group, but you can't let your guard down, either. Use extra caution when you're in a shopping or entertainment district, as those are the most common theft locations.

The 2021 Water Quality Report shows full compliance and no violations. This doesn't mean there aren't water risks during flooding or tropical storms, but it does mean the utility is always monitoring the water and reporting test results as expected. If there is a water quality issue, the city will announce it on social media.

Safest Places to Visit in Annapolis

VisitAnnapolis.org is the official tourism site for the city.

It also covers regional attractions across the Chesapeake Bay and Anne Arundel County.

You can download a free visitors guide or sign up for the newsletter for upcoming deals and events.

The Annapolis Maritime Museum is a wonderful experience of life on the Chesapeake Bay and the nuances of navigating its waters.

The museum offers interactive exhibits and a holographic waterman providing a special tour.

You can book trips on a skipjack or visit the Thomas Point Lighthouse.

The United States Naval Academy Museum is another great walk through history.

It’s on the grounds of the Naval Academy, so you get a great two-for-one visit.

Two stories cover the span of the Navy and its importance in the military fleet of America.

Downtown Annapolis is about as seaside charming as you’ll ever find.

Start with the Museum of Historic Annapolis to appreciate the rest of the places you’ll see.

The William Paca House is a mansion within a mansion, with five parts to its layout.

If you only see one 18th-century home on your trip, it should be this one.

You can take a guided tour or explore on your own, and you’ll have access to the restored home and gardens.

Some are just walking tours of the downtown area, while others incorporate a pub crawl into the ghostly legend lessons.

For those bringing kids, there is a brief mention of prostitutes, but they are described as “working girls,” and you will go to a cemetery on the walking tour.

Since Annapolis is the capital city, take a tour of the Maryland State House.

It’s the oldest state house that has been used continuously since it opened.

Self-guided tours start at the Office of Interpretation, where you’ll get a map.

You can get a guided tour but need to schedule that in advance.

It’s worth stopping by St. John’s College just to snap a few photos of the third-oldest college in the country.

Eastport is across the harbor, and you can there by boat or bridge.

You’ll love the views of Annapolis while immersing yourself in this historic, laid-back part of town surrounded by water on three sides.

There’s Restaurant Row, where you can Surf & Turf for every meal if you’d like.

From here, you can take a boating excursion to watch the ships move in and out of the bay.

You can also visit a memorial and educational center about the atrocity of slavery, as hundreds of slaves were held here, and less than 10 were confirmed to ever live a free life.

The memorial also pays tribute to the slaves who died at sea.

Places to Avoid in Annapolis

This is a rather small community with just 40,000 people, so it’s not easy to avoid the “bad parts.”

I’ve combed through several years of crime data, and the downtown area and west Annapolis shopping areas have the highest cases of thefts and robberies.

Wilshire and Victor Haven neighborhoods have higher crime rates, but those are residential areas you likely won’t visit anyway.

The city is safe enough that using good situational awareness and sticking to the main roads and tourist destinations should keep you out of harm’s way.

Avoid this area before, during, and just after a hurricane.

There’s just one main road out of town, and you don’t want to get stuck in evacuations.

The downtown area also easily floods, meaning you could be forced out of your hotel or closed for repairs after a storm.

Safety Tips for Traveling to Annapolis

So... How Safe Is Annapolis Really?

Annapolis has the benefit of being “nowhere near as bad as Baltimore,” but that doesn’t mean the crime rates there aren’t important.

The city was holding steady with crime rates until a surge in violent gun crime happened in the summer of 2021.

At the same time, the police department is dealing with historically low staffing levels and not enough incentives to bring in new recruits.

What’s really unfortunate is that the police department doesn’t issue official crime data, or at least didn’t in 2021.

Even the information provided for 2020 lacked context, such as if victims were strangers or known to the criminal.

What we do know from talking to several people in Annapolis is there’s a sense of “it used to be safe here.”

Far and wide, however, Annapolis hasn’t seen the incredible surge as many other large cities have.

The fact that law enforcement has been able to keep crime rates relatively stable is actually good news.

This is a safe place to visit, with some sketchy neighborhoods on the south side and entertainment areas being the main target for thefts.

You also have to consider water and weather safety, as those come with inherent risks as well.

This guide should get you started with the right tools to have a safe trip to Annapolis and see some real American history right before your eyes.

How Does Annapolis Compare?