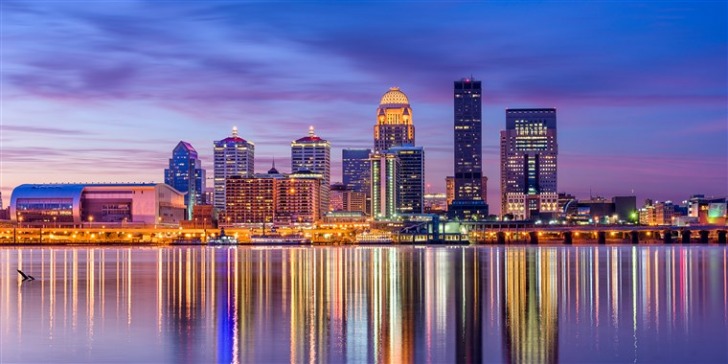 Louisville, Kentucky, is Derby City, known for its popular horserace and Louisville Slugger.

It sits on the south side of the Ohio River, with Indiana across the water to the north.

You might even hear people refer to this region as Kentuckiana.

Be sure to speak like a local and call it “Lou-uh-vul” (say it really fast) and not “Lou-wee-ville.”

Here you can dine on Bourban Balls and the Hot Brown while visiting the Kentucky Fried Chicken headquarters.

They put spaghetti in the chili and have some of the best bourbon you’ll ever sip (just ask them.)

This is also the home of the global hit song “Happy Birthday.”

Haven’t you always wondered where that came from?

The origins date back to 1912, by Louisville sisters Patty and Mildred Hall (and anyone who disagrees is just plain wrong, according to anyone in Louisville).

The city made global headlines with the shooting of Breonna Taylor during a no-knock warrant search.

Louisville Police were at the wrong address, but in a confusing and controversial situation, Taylor’s friend shot at police thinking it was a break-in.

Breonna was killed in the crossfire when officers shot back.

This led to protests and the social media message of “Say Her Name” to bring awareness to systemic racism in America.

Louisville is a fun city for tourists, but it’s also complicated.

Some of the suburbs are among the safest cities in the country.

Meanwhile, Louisville made some lists of the most deadly cities.

We have thoroughly researched Louisville and the surrounding areas, one city at a time, on this website, and we encourage you to explore all of them before making travel decisions.

This city has a medium - sometimes high - risk. It's hard to imagine the city was one of the safest in the country in 2006 and now holds one of the highest homicide rates in the nation. Looking at the list of unsolved murders from 2021, it's shocking to see the crime wave that has gripped this city.

Tarc is the public transportation system that runs inside the 265 loops and across the Ohio River into Indiana. What's interesting is that the tourism site doesn't mention this option in its "Getting Around" section. Maybe you should consider other options. You can get rideshares and taxis - with zTrip being the most popular taxi to and from the airport. Bicycles and scooters are also available for rent throughout the city. You can also get a car rental, which I think is ideal so that you can explore the horse country outside Louisville.

44 pickpockets or purse snatchings were reported in 2020. In a city of nearly 250,000, that's not a lot. You should still use extra caution with what personal items you bring and how visible those items are to passersby. With high robbery rates and big events built around alcohol, you should always do your utmost to protect your stuff.

Louisville can get a little bit of every weather event, from ice storms to tornadoes. Since there's a threat throughout the year, treat it with medium risk and study the emergency management page so you can better prepare for the worst.

I triple-checked this - the robbery rate here is nearly seven times the national average. This is happening while violent crime rates soar. While it's important to avoid dangerous parts of town and follow safety steps, you should also know what to do if you get confronted by a robber. Don't fight back and follow commands. Try to remember as much as you can without looking the robber right in the eye. You want to be a good witness when you report a robbery.

There's a medium risk during big events like Derby Week, but otherwise, there isn't much that makes Louisville a hard target. While there's a risk in any city with major attractions, there are bigger cities higher on the terror watch list.

Look at the Common Scam Myths on the police department's website to see a list of current scams and how to avoid them. While most scams here target locals, tourists must watch out for rental scams and people selling tickets on third-party websites like Craigslist. Never wire money or buy gift cards to secure a purchase or reservation.

The sexual assault rate is two and a half times the national average. With a mix of alcohol and fun times, it can be easy to let your guard down. Avoid walking around alone at night, and never go to a private house party if you don't know the people there. While many sexual assaults are domestic in nature, it's smart to take protective steps, like walking with your keys in between your fingers to ward off an attacker. Always look under your car when it has been parked for a while.

Louisville is so proud of its tap water that it has trademarked the name "Louisville Pure Tap." The 2021 Annual Water Quality Report gets an A+ for water quality with no violations reported. The water quality of the Ohio River when it comes to recreation is a whole different story. We'll talk about that in this article too.

Safest Places to Visit in Louisville

This is the best resource to use for cyber security and authenticity.

While other websites offer plenty of good information, it’s smart to stick with official sites for the best safety protection online.

You can also call (800)743-3100 to talk with a specialist about hotel and attraction packages to save you money.

Batter up to the Louisville Slugger Museum & Factory, where you can see the history of baseball bats and modern bats being made fresh off the fiery press.

You can even get a look at the world’s tallest bat.

Step up the plate and try to hit like a big-league batter.

This is a must-see for baseball fans.

The Muhammed Ali Center celebrates the legacy of this hometown hero.

The museum has different exhibits based on Ali’s core beliefs that helped him achieve worldwide accolades.

This is one of the stops on the Civil Rights trail, which also details how Ali was influenced by racism and segregation, along with how he overcame racial obstacles.

The Roots 101 Museum is among the newest attractions in Louisville.

The architectural design will inspire, while the history of the African American culture will provide a range of emotions as it walks through the native lands of the people and how they were brought into slavery and then fought for freedom.

This is an educational and inspirational opportunity for everyone.

The Belle of Louisville isn’t a person – it’s a steamboat that makes you feel like you’re going to bump into Huck Finn or Tom Sawyer onboard.

This boat has been in action since 1914.

Churchill Downs is open for tours throughout the year.

The Kentucky Derby Museum can fill out quickly, so book your tickets ahead of time.

For example, you can book a breakfast tour during training season and watch the horses run nearby.

The backside tour takes you to the areas where the horses are stabled and get a view that isn’t possible during the Derby for the general public.

With so many bourbon bars and distilleries in the area, it’s more fun and efficient to go on a bourbon tour.

There’s also a Bourbon and Bridles tour that takes you to Churchill Downs while sampling some of the distilleries.

Ghost tours are also available throughout the year but get especially hyped during the fall.

There are even levels of ghost tours here.

One goes through the most haunted spots, and the other talks about the tragedies, sickness, and struggles the city had.

The latter is called the “Melancholy and Mourning Walking Tour.”

The Frazier History Museum has a mini-museum within a museum in “Cool Kentucky.”

This exhibit showcases the novelties, inventions, and innovations of Kentucky residents throughout the year.

Places to Avoid in Louisville

With Louisville’s intense and sudden increase in violent crime, you should treat every neighborhood as a potentially dangerous one.

This goes for places INSIDE the city limits, not necessarily the suburbs.

Don’t go off the main roads to the different tourist attractions.

Avoid walking around alone day or night, and never walk around at night.

It’s just too easy to stumble into a bad neighborhood, as one block might be safe, but five blocks in all directions could be unsafe until you get to another safe block.

I wish I could give more specific information than that, but I used the Crime Mapping tool on the police department’s website just searching for homicides and aggravated assaults.

Aside from one small area south of Broadway at 12th Street, the map is lit up with crimes.

Once you get south of the University of Louisville, the large numbers of crimes taper off.

The same goes for the east side of the city east of Cherokee Park.

Take note that crime trends can change, so use the crime mapping tool closer to your visit.

Safety Tips for Traveling to Louisville

So... How Safe Is Louisville Really?

At one time, it was unthinkable for Louisville to have homicides in the triple digits.

Another resident told the TV station, “We have to stop shooting each other.

It’s getting ridiculous every time somebody’s getting killed, and now it’s in my neighborhood and on my street.”

Louisville Police released a statement in regard to the crime rates, saying, “Like many major cities, Louisville has experienced an unacceptable rise in gun violence and homicides over the past few years.

LMPD is committed to utilizing a wide range of crime mitigation strategies to reduce violence, including seizing guns from individuals who cannot legally own them and focusing on known violent offenders.

You can exponentially lower your risk here by following this basic guidance:

To get a dose of reality, look at the list of unsolved homicides from previous years on the police department’s website.

It’s jarring to see the young and older faces, read their stories, and know that justice is long overdue.

It’s safer and smarter to stay in one of the safer suburban areas and visit downtown for the main attractions and nothing else.

How Does Louisville Compare?