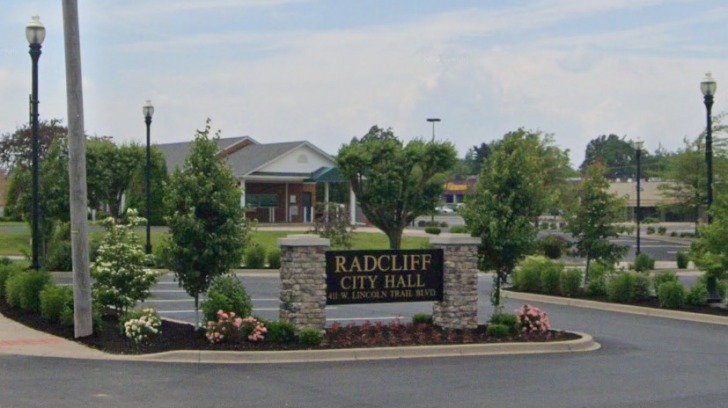 You might have never heard of Radcliff, Kentucky, but you’ve certainly heard of Fort Knox, right?

Radcliff was once a city of exiled residents, forced to leave their homes because of the expanding Fort Knox.

Once the fort was fully functioning, Radcliff became the place to go and have some fun after a day of military training.

Now a city of 23,000 people, Radcliff is close to the big city but right next door to some of the most incredible forestry you can find in Kentucky.

I’m not going to mislead you – Radcliff is a residential town without many things to do within the city limits.

You can use it as a great starting point for adventures in all directions.

Radcliff is also one of the most diverse communities you’ll find in Kentucky, opening the state to new cultures and creative avenues.

That’s not to mention the incredible range of food you can try here while still getting a sample of the traditional Kentucky bourbon.

I’m not going to bury the lead here.

You will not be able to get into the gold vault at Fort Knox unless you have a Presidential Order.

There's a low risk in Radcliff. This is one of the smaller towns around Fort Knox, but it's also a relatively safe area with violent crime almost 40% less than the national average.

With no public bus system, you'll have to rely on taxis and rideshares that you can find. Those options just might not be as readily available as you'd like. Having a car here is preferred.

No pickpockets or purse snatching have been reported for the past few years. The highest categories for thefts are shoplifting and car break-ins. There's a low risk of getting your wallet stolen from your pocket, but a 22% risk that it could be taken from your car.

Kentucky, by and large, has a medium risk. This state can get the best and worst weather. Spring brings tornado season, and the south is known as Dixie Alley, meaning a second Tornado Alley. Even if you dodge the twister, you still face a more common risk of severe thunderstorms, large hail, flash flooding, and intense lightning. Winters aren't too cold, but a blizzard or ice storm isn't out of the question, and those can cripple travel.

Nine robberies were reported in 2020, and oddly enough, 20% of them were in public places. There's a low risk it will happen to you, but you should always keep your guard up and be aware of your surroundings.

Wow. The scammers in Radcliff and the surrounding area are creative. One scam involved fake customers ordering from delivery drivers, then trying to steal the driver's car. In another instance, a scammer would call someone randomly and tell them they won the lottery. They would ask for bank information to make the deposit or demand tax money upfront. The risk of a tourist getting scammed is low, but these scammers sure know how to come up with ways to get your money.

Women should feel safe visiting here with low risk but should look at the safety ratings of Elizabethtown and Louisville, as not all cities nearby are necessarily as safe as Radcliff.

The 2020 Annual Water Quality Report is the most recent one available. It does show all tests were at or below the potentially dangerous levels, which means the water is safe with low risk. You can call the Hardin County Water District at (270)351-3222 if you have questions closer to your visit.

Safest Places to Visit in Radcliff

When I first took on this monumental assignment to research and review travel safety in hundreds of U.S. cities, I vowed to stay hyper-local since this website is so in-depth about each city.

It’s easy for travel sites to just find the BIG things nearby and report on them.

I like to get into the nitty gritty of each small town and find unique spots while highlighting nearby attractions.

Radcliff challenges that goal with not a whole lot to do in the city itself.

However, there are some great opportunities when you take a closer look.

Let’s start with the food.

We discussed how the community is diverse, and that shows in the restaurant selections.

There are authentic German, Korean, Chinese, Mexican, and Japanese restaurants throughout the city.

I would recommend avoiding the national brands and trying some unique, locally-owned businesses.

You can also find traditional Southern restaurants here too.

The Red Hill Cutlery has the world’s largest pocketknife outside the building.

This massive sculpture is made of over 6,000 pounds of steel and stands nearly 18 feet tall.

Inside, you’ll find the Kentucky Museum of American Pocketknives.

The museum has recently moved, so make sure you have the right address, which is 92 Bourbon Trace.

Right next door, you’ll get a taste of Kentucky at the Boundary Oak Distillery.

Here you can sample and purchase a variety of bourbons, including a lavender variety.

Tours of the facility are available.

This is one of more than 40 stops on the Kentucky Bourbon Trail.

Saunders Springs Nature Preserve is on the east side of Radcliff.

With 26 acres of dense forest, there are plenty of places to explore on bike, foot, or car.

This is a free park that’s open year-round.

Along the paths, you’ll find caves, small waterfalls, babbling brooks, and more than 300 varieties of plants and flowers.

There are three cabins from the 1800s in the park and part of a 1920s water plant still standing.

Did I mention there’s good fishing here too?

On your way to Fort Knox, you can visit the Kentucky September 11th Memorial.

A piece of the twin towers stands over an intricate piece of art depicting the tragedy.

There’s a wall of names in honor of Kentucky soldiers who served in the military after 2001 and died in the fight.

The General George Patton Museum of Leadership is open every day but Sundays and Mondays.

Inside contains the largest collection of General Patton artifacts worldwide.

The World War II Barracks is open anytime the museum is, and Armoy Unit Memorial Park is on-site as well.

Bridges of the Past is a walking trail that runs two miles along the former road between Louisville and Nashville.

Even President Andrew Jackson was a frequent traveler on this route.

Toga Trail is another hiking path but is more for the experienced hiker as it is rough terrain.

The hike is worth it to see the falls in action.

You can visit Fort Knox, but there are a lot of requirements to review, so plan ahead of time.

You can’t just show an ID and get in.

There’s a vetting process for everyone without a military ID.

Places to Avoid in Radcliff

Radcliff is really just a long city with the Dixie Highway going through the center of it.

Most crime is along this road because that’s where most businesses are located.

It’s actually hard to get lost in this small town.

terrorism, or suspicious items (unless the item is legitimately suspicious).

It’s also wise to never bring up the Civil War unless you want to get into a debate about states’ rights.

You should also avoid attempting to enter Fort Knox at any entrance but the visitor’s center if you don’t have a Department of Defense ID Card.

The main entrance is off Bullion Road.

Safety Tips for Traveling to Radcliff

So... How Safe Is Radcliff Really?

Radcliff is a relatively safe city, but it doesn’t have its fair share of crime.

The violent crime rate is lower than the national and state average but surpasses average rates of property crime.

Researching cities has helped me gain a new appreciation for not just crime data, but the intricacies of what you can learn in each city and how you can apply it to future travel.

In one example from 2020, a young man who lived with his parents met a woman on a dating app.

He invited her over.

She went to the bathroom for a long time, where it seemed she called a group of men to come to rob the house.

Four men beat down the door and robbed the family at gunpoint.

Another example in April of 2021 involved a woman shopping at Walmart.

She was wearing a gun on her belt and was a concealed carry permit holder.

As she reached to grab something off the top shelf, a man pulled the gun from her holster and took off running.

This started reports of an active shooter situation, which can be quite scary for anyone, but especially tourists.

Here is a little bit more context to the crime data from Radcliff:

Being that it’s a military town and, well, Kentucky, there are going to be more people carrying guns either openly or concealed.

You’re going to have trained military fighters who know how to use weapons.

Depending on your gun stance, that could make you feel safer or more in danger.

It’s just something you should be prepared to see when you’re visiting.

This is also home to one of the Army’s finest garrisons.

There is a community, state, and country pride here.

On top of that, you’re surrounded by beautiful Kentucky wilderness near the state’s biggest city.

How Does Radcliff Compare?