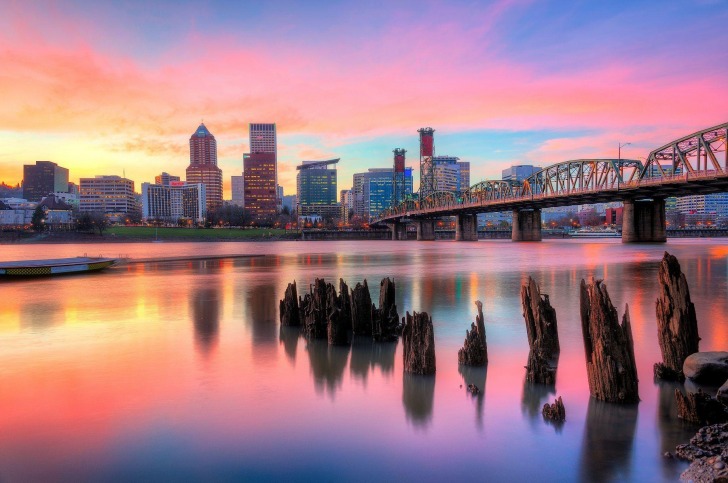 Portland, Oregon, is in the state’s northern section, just south of the Washington state line.

Two rivers run through and eventually meet in Portland, Willamette, and Columbia.

This isn’t where you’ll find information about Portland, Maine.

The two Portland cities are about as far away as can be in the continental United States, with 3200 miles between them.

Many of the websites you’ll find for each city have similar names, so we’ll be sure to detail the correct website for Portland, Oregon, as we go through the different elements.

Portland has a long history of public demonstrations and protests for civil rights or speaking out against wrongdoing.

While the 2020 protests garnered headlines in the wake of the George Floyd murder, that wasn’t Portland’s first protest by any means.

You might see protestors while you’re there or view propaganda from circling crowds of people exercising their right to free speech.

The city is split up into six quadrants, with more than 90 neighborhoods between them:

Much like social media trends we see now, roses became a trend in the 1880s when a prestigious woman invited friends over to see her elaborate rose garden.

The trend took off, without social media, of course, but sprang to life so quickly that you would see roses even bordering Portland’s streets.

Is everything still coming up roses in Portland?

Portland has a medium risk, but it's not as bad as you might have heard. There are a lot of ingredients that go into the risk level we provide, but Portland is struggling - like many other large cities - with an increase in violent crime. 2020 was rough, and 2021 was worse. 2022 and beyond remain to be seen, with new initiatives to fight crime, keep police staffing at safe levels, and reduce budget-breaking overtime. I will give commendation to the tourism website that addresses this issue head-on with a section on Safety in Portland. It doesn't hold back on tough questions tourists are asking.

TriMet is the public transportation system that covers bus service through the city and the suburbs, a light rail, and a street car system. Portland is very bicycle-friendly. You can also get taxis and rideshares easily or choose to rent your own vehicle. While public transportation can go through high-crime areas, all methods of getting around have risks and benefits. Choose the one you feel safe using to get around but always remain aware of your surroundings and avoid distractions like headphones.

While the 186 pickpockets and purse snatchings are nothing compared to the 13,400 car break-ins, it's still worth treating this as a medium risk. There can be crowded parts of the city or at big events, and if there are protests, that could also cause a distraction, which would make you an easy target.

Portland faces a lot of risks throughout the year, so it's a medium risk for sure. There are possible earthquakes that give no warning. Flooding, wildfires, air quality issues, and landslides are other risks. Since many of these risks are new to some tourists, check out the website publicalerts.org/hazards to read how to stay safe before, during, and after these potential events.

32% of robberies happen in public places, known as highway robbery. In addition, 42% of robberies happen in businesses or other places the general population might be. This city has a lower robbery rate in homes than many other cities, so be on guard. While most robberies are among people who know each other, you can lower your risk by not wearing valuables or having an easy-to-spot designer purse or a fancy watch.

The bigger risk would be from protests that get out of control or a home-grown terrorist, but being a big population region, there's going to be a medium risk all around. Seattle to the north would be a more likely target due to the high-tech areas and shipping ports.

Search for the Scam Alert Network through the Oregon Department of Justice website. You can sign up for scam alerts there, and any new scam will be mailed to you. The top scams reported in 2021 mostly impacted residents.

Violent crime data shows women are actually less likely than men to be a victim of a crime, but you'll need to use street smarts and common sense to lower your risk further. Don't drink alcohol beyond your ability to make smart decisions. Don't go to private house parties and stay in the well-lit sections of the entertainment districts.

The way the 2022 Portland Water Quality Report is worded, there's no clear message if there was a violation or not - but it does look like all testing was in full compliance. I'd advise calling the Water Quality Line before you go to ask about current water quality tests. That number is (503)823-7525. You can also email WBWaterLine@portlandoregon.gov.

Safest Places to Visit in Portland

You want to visit TravelPortland.com to get to the tourism site for the Oregon location.

If you go to VisitPortland.com, you’ll be at the Maine location, which is 3200 miles away.

The Travel Portland website has a really cool feature called “Near Me,” which is a 3D interactive map that marks your location and shows you cool things to visit nearby.

It’s like a tour guide right on your mobile device!

Step aboard the Oregon Maritime Museum to spend an hour on a steam-powered sternwheel tugboat.

This is the last one of its kind still in use.

From the wheelhouse to the boiler room, you’ll get a full tour of the boat while riding the Willamette.

(And in case you didn’t know, Willamette is pronounced: “Will-AM-it.”

Locals will tell you “Willamette, Dammit” so you remember how it rhymes.

They aren’t cursing at you.)

The Oregon Museum of Science and Industry is full of innovative and interactive exhibits, but what really makes it cool is that kids can enjoy it by day, and at night there are special events held for adults only to enjoy a few cold beverages in this unique setting.

Go inside to go outside at the World Forestry Centers Discovery Museum, which explains the importance of forests, trees, and the surrounding ecosystem to the world.

You’ll learn about the animals in the forest, how logging works, and how sustainability will help forest regions thrive.

That museum is in Washington Park, which is a great place to spend a day or two.

The Oregon Zoo is also located there, along with the Portland Japanese Garden.

You simply cannot miss the International Rose Test Garden, in bloom from late spring to early fall, with more than 10,000 types of roses and sweet scents filling the air.

What makes this even sweeter?

The Rose Garden is free to visit!

Oaks Park is an amusement park with a carnival atmosphere south of the city.

It’s no Disneyland, but it’s a great adventure for kids and adults, with seasonal activities like “The Park After Dark” during Halloween.

Forest Park lives up to its name with a massive park near an urban setting, and if that’s not enough – there’s a witch’s castle inside!

Ok, so the witch thing might be a little creepy.

You can also visit Pittock Mansion and see how the affluent Portland family once lived.

Portland is a progressive city, and it’s a cultural destination for everyone.

The tourism website (TravelPortland.com, remember – don’t go to the wrong one!) has a great breakdown of every culture you can imagine, from Japanese Americans to Latinx/Hispanics to LGBTQ and even Jewish culture – there is so much a tourist can learn here and enjoy traditions from other countries.

Places to Avoid in Portland

Neighborhoods in the far east and northern sections of Portland have the highest crime rates and are even mentioned in the Portland Safety FAQ section of the tourism website.

These traditionally underserved and financially-disempowered communities were hit hard by the pandemic and saw violent crime rise.

While the downtown area can also have crime, you need to avoid leaving a car unlocked, having even a small space rolled down on a window, and leaving the car as empty as if it came off the factory line.

57% of thefts are directly related to car break-ins or car accessory thefts.

Avoiding arguments with protestors, even if you disagree with their cause.

You do have the same freedom of speech and right to speak your mind, but don’t let tensions escalate.

Most protestors will be happy to have a calm and rational discussion, but it just takes a few angry people to turn a protest into an angry mob in any city.

Safety Tips for Traveling to Portland

So... How Safe Is Portland Really?

First, there’s the rising violent crime – mostly shootings and homicides – that has led to the mayor declaring a State of Emergency many times in the past year.

The emergency declaration comes at the same time the Portland Police Department is dealing with historically low staffing levels.

The 2020 protests lasted almost three months, blasting through the overtime budget of the police department.

That puts the department deciding between having enough officers to cover the city while working overtime or risky public safety to adhere to a budget that’s already bleeding red ink.

Now, here’s the other side of this coin.

A Homicide Problem Analysis was done and created a report known as CPSC (not to be confused with the Consumer Product Safety Commission – this one stands for California Partnership for Safe Communities.

According to the CPSC report, there are 200 people in Portland who are responsible for the bulk of the shootings happening at increasing rates.

Much of the violent crime happens between known affiliates, gang members, or drug-dealing situations.

There isn’t a rash of crime against tourists, but there is more crime in places tourists might be.

Add to that – Portland prides itself on being “weird” and accepting of all people.

Some people see “weird” as dangerous, but that’s not the case.

Portland is a big city, and you’ll likely be panhandled by homeless people, offered drugs, or have a thief peek into your car for valuables.

That could be said of any big city.

Stick to the main streets and tourist attractions.

Don’t walk around alone after dark.

Use common sense, situational awareness, and basic safety steps, and you’ll get to enjoy the cultural melting pot in Portland – and all of its “weirdness.”

How Does Portland Compare?