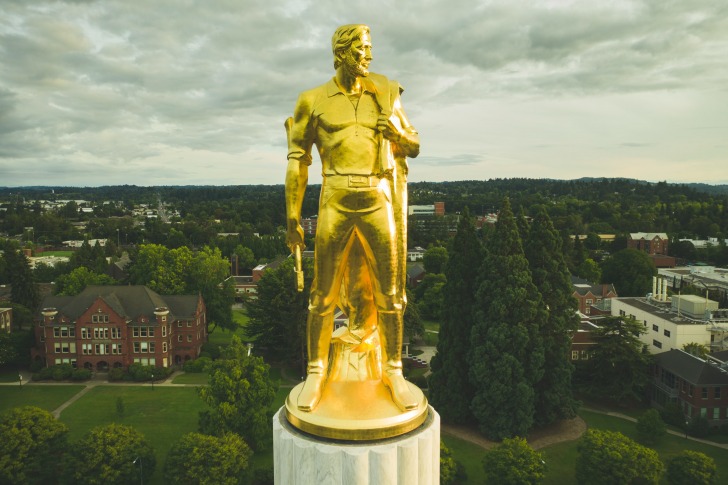 The city of Salem is marketed as “The most Oregon part of Oregon.”

It’s a mix of art, history, and outdoor adventures.

It’s also a booming business center with a small-town feel.

Salem, Oregon, ranks in the top 100 places to live and retire by U.S. News and World Report.

The state’s capital is in Salem, feeding a good mix of politics into the culture.

It’s an hour away from Portland, making it a great commuter city for those who don’t want the big-city feel of Portland.

Salem is also an hour east of the famous Oregon coastline with its rocky ridges, tide pools, and wave-watching.

Also, where else can you see goats mowing the lawn and be banned from pumping your gas?

There's a mixed bag of information when it comes to crime and safety. Violent crime is lower than the national average, but property crimes do top the national numbers. Those numbers shouldn't make tourists think twice about visiting Salem. There's a low overall risk. Many of the crime number percentages need to be looked at in a view by the decades, as there was a large spike in crime in this area in 2017/2018. So yearly, the crime statistic might be down, but it's still higher than pre-2017 in some categories.

There's a low risk when riding public transportation and plenty of options. Cherriots (not a typo) is the local business service that runs hyper-local and regionally through the mid-Willamette Valley. There are also several shuttle options between Portland and Salem. Not only does the state regulate public rides and taxi services, but it is also dedicated to making roads better with an aggressive transportation plan.

With Oregon ranking #2 on a list of states most like to have natural disasters, we're going to have to go with a medium risk on this one. Some of the higher risks are limited to the coastline, like tsunamis, but there are still flooding, volcano, wildfire, and wind/dust storm concerns inland. Wildfires might be the biggest concern for the state and the western United States. It's wise to have a good weather app so you can check all the weather conditions ahead of your trip.

The big risk here is going to be from the natural world, not the terrorist world, so there's a low risk. Oregon is an outdoor adventure land with no hard targets for terrorists. The only concern could be any residual impact should Seattle's port become a target that could limit travel and supplies.

There's a low risk of scams in Salem and across Oregon, with a high chance, any scammed will be caught. This is because the Oregon Department of Justice has a Scam Alert Network you can sign up for quickly. You'll get a notification if there is a new scam and you can report any scam you see.

There's a low risk for women travelers. Oregon doesn't allow people to put gas in their own gas, making it safer when you gas up because you don't get out of the car. Some travel companies offer deals for women-only groups, giving an extra sense of safety. The crime data doesn't show there's any more chance a woman will be a victim of a crime than a man, but follow common-sense safety steps when visiting Salem, Oregon.

There's a low risk in the tap water of Salem and if an issue arises, the city will let you know through the Salem Community Alert System. May - September the water is also additionally tested twice per week for algae bloom pollution.

Safest Places to Visit in Salem

Even looking at the Community Crime Map provided by LexisNexis for the past year, the top crimes like robbery, larceny, and property crimes seem pretty spread out evenly through the city.

When looking at places to visit, it’s important to note that Salem is a city, but it’s part of the mid-Willamette Valley, so tourism suggestions might include a city outside of Salem but still in the region.

For example, if you want to visit the Aurora Colony National Historic District, it is just 30 miles away but still considered part of the Salem community.

Probably the absolute safest place to visit in Salem is the State Capitol building and surrounding grounds since there are plenty of security measures taken for admission.

Don’t miss the state Park outside the capital, as you can walk through beautiful flowers and plenty of history.

Riverfront City Park is a great place to enjoy a nice day with a carousel ride or hiking nearly 30 miles of trails.

The historic Elsinore Theatre is a big draw, even if you aren’t seeing a show.

Just the majesty of the theater is worth visiting.

Places to Avoid in Salem

There are more than 1100 homeless people in Salem, and they can be a nuisance downtown.

The city has many efforts to help the homeless, including female-only shelters, but as with most cities, this problem isn’t easy to fix.

You don’t need to avoid downtown because of this, but just be aware.

Social forums are filled with advice that isn’t very consistent with neighborhoods.

Some say the north side has a little higher crime, others say avoid the south side.

Again, we dug into the crime maps of the most likely tourist crimes, and it’s spread pretty evenly.

If you head to the west side of town, get ready for traffic because the bridge backs up big time—one of the biggest complaints among locals.

When walking around town at night, especially if you are in a park or off the beaten path of the micro-breweries and nightlife, use basic caution.

Keep your belongings close and don’t wander down dark alleys or strange streets.

Safety Tips for Traveling to Salem

So... How Safe Is Salem Really?

It’s a community that went through a crime spike in 2017 and is slowly recovering.

It’s the second-largest city in the state and a commuter city connected by bus, highway, and train to the bigger city of Portland.

There is going to be a certain amount of crime in a city this size, but there’s no stand-out concern for the average tourist.

For the past three years, crime has been down each year and is now equaling the crime rates of 2015.

This is a liberal, outgoing community that welcomes tourists.

More than 10% of revenue in the city is fed by tourism.

You should feel safe exploring Salem, the mid-Willamette Valley, and the coastal areas of this region as long as you use basic safety measures to keep your stuff safe and not draw attention to yourself with large amounts of money or valuables.

If you rent a car here, keep your belongings out of sight and lock the doors.

How Does Salem Compare?