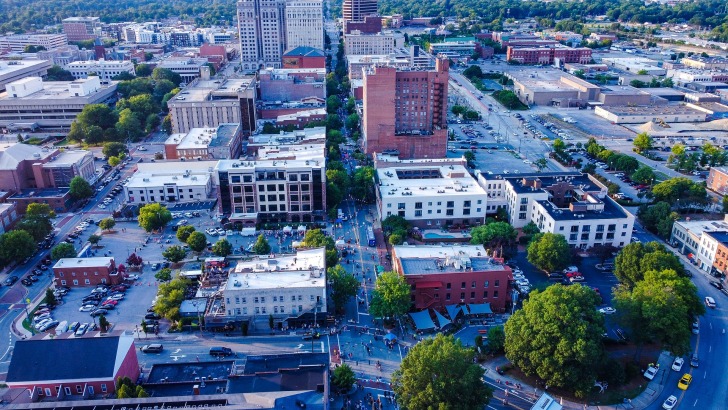 Greensboro is a city in the Piedmont area of North Carolina, and part of a group of three cities called The Triad, which includes High Point and Winston Salem.

Greensboro is an old city, and for years was a center of the tobacco and textile trades.

As those industries faded, Greensboro sought more high-tech businesses, and many have moved here.

Greensboro is about halfway between the Appalachian Mountains and the Atlantic Ocean.

It is an hour from the state capital of Raleigh.

The city is host to many tournaments and athletic events and is known for its many athletic facilities.

It also has a lot of parks and natural areas.

It has several small colleges, along with an active culture and nightlife as well.

It is one of the most popular tourist areas in the state.

Greensboro has its share of crime as any large city would, but overall, it is a safe city. Greensboro's crime rate is near or below the national average. A lot of high-tech industries, along with colleges, give the town an upscale feel and there are not a lot of high-poverty areas. The safe areas are very safe, and there are areas to be avoided.

Taxis are available from the airport into town and to all areas of the city. There is a bus line that provides transportation throughout the city and has discounts for seniors and college students. The downtown is easy to navigate on foot or by bicycle. It is an easy town to get around, and there are few incidents reported.

This crime is fading in popularity because people are carrying less cash, and stolen cards are harder to use. There are few incidents reported, but they do happen. It is a good idea to keep your wallet or purse in a safe place when you are in crowded situations. For the most part, there is little risk of being the victim of a pickpocket.

There are tornadoes at times, but they are not common. If there is a warning, you should still seek shelter. The area has had very few earthquakes or significant floods. In winter there can be ice storms that can wreak havoc on the roadways and make travel dangerous if not impossible.

In the tourist areas, there are very few muggings that happen. Those that do are in isolated areas at night, and it's fairly easy to avoid those. There are some bad areas of town where your risk will go up sharply, and those areas are best avoided, especially at night. If you stay in tourist areas and don't go out at night alone, your risk is very small.

Cities can be a target of terrorists, and Greensboro could be a target because of its tech industries. However, there have been no incidents thus far. It is a good idea to remain vigilant, however. There have been some protests, and there is concern about domestic terrorism from extremist groups, but so far they have not attacked.

Taxis are metered, but a driver might try to take the long way to get a higher fare, but even that is not common. There are fake tickets to events sold at times, so it is not good to buy those on the street. In general, there are few scams on the streets, but if anything seems too good to be true, there is probably a problem.

Women travelers are common in Greensboro, and there is no indication there is more danger for women than there is for men. If you don't go out at night alone, there is little chance of having a problem. Basic safety precautions are usually good enough to keep women safe in Greensboro.

The city of Greensboro provides water that exceeds state and federal requirements. There are very few incidents of water even getting contaminated in the piping of buildings. You can safely drink tap water in Greensboro without concern.

Safest Places to Visit in Greensboro

There are a lot of interesting things in Greensboro, and those areas are generally safe.

One natural area is called the Bog Garden, wetlands with flowers, birds, and an elevated wooden boardwalk.

The Guilford Courthouse is now a national military park and a historical site that dates back to the American Revolution.

It has interactive displays from the Revolutionary and Civil Wars, as well as the civil rights struggle.

There are several small colleges with interesting sights as well.

The city also has a lot of sports venues where you can watch sports, or participate in sporting events.

The northwest area, with a lot of shopping centers, is generally regarded as the safest area of the city.

Places to Avoid in Greensboro

The central area of Greensboro is the most dangerous, and some areas are not even safe in the daytime.

In the central part of town, your chance of being a crime victim is one in 11.

The southwest section of town also has a relatively high crime rate, but not as high as the downtown.

Some neighborhoods have the highest crime rates, which include Greentree, Oak Grove, Dudley Heights, and Woodlea Lakes.

Greentree is a small area of only a few hundred people, but this area has the lowest median income and the highest rate of crime in the entire city.

Some older sections of the downtown area have areas that have historic homes that may be in fairly dangerous areas.

If you go there, do not go alone, and don’t go at night.

Safety Tips for Traveling to Greensboro

So... How Safe Is Greensboro Really?

Greensboro has a crime rate above the national and state averages.

It also has a crime rate higher than nearby Winston Salem, which is among the safest in the state.

For a few years, gun violence was rising, but it seems to be falling now.

The crime rate remains high in the city, however.

Burglaries, theft, and auto theft are also about twice the national average.

In a large survey, 37 percent of residents said there is not a lot of crime, while 63 percent said there was.

A full 40 percent rated it as awful. Only 18 percent of residents felt safe walking alone outside at night.

Almost 60 percent said they would not feel safe at all at night outside by themselves.

The tourist areas seem pretty safe though, as little crime is reported there.

Those areas are not large though.

There are larger areas of the city, such as downtown, and the west side, that have a significant amount of crime.

The tourist areas, while not the largest area of the city, are safe enough in the daytime.

How Does Greensboro Compare?