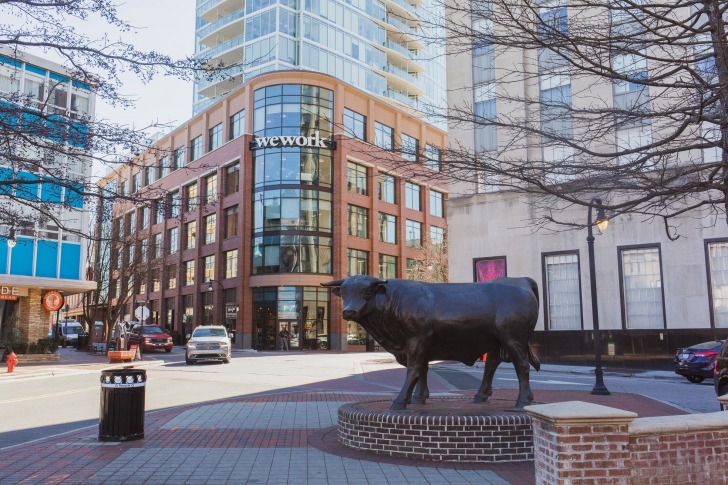 Durham is part of North Carolina’s research triangle known for its technology companies.

It is home to Duke University.

It is a cultural area with many museums and a strong arts community.

With almost 300,000, it is the fourth-largest city in the state, and next door is the state capital of Raleigh, the second most populous at almost 500,000.

Durham is about 130 miles from both the Appalachian mountains and the Atlantic Ocean.

It is also a medical center with 300 health-related companies.

Durham also has many distinct neighborhoods, which can give it a small-town feel despite its size.

Durham had its beginnings in the 1850s and has many historical buildings to go along with its modern amenities.

It has a history of being the center of the tobacco and textiles industries as well.

It is also home to Duke Forest, a 7,000-acre research forest.

Durham is a very upscale city centered around technology and education. It has a low poverty level and high employment, which tends to cut down the level of crime. There are bad areas like there are in any city, but for the most part, Durham is a safe city.

There are very few incidents of pickpockets in Durham. Crime is not as popular as it used to be because cards are harder to use, and people are carrying less cash. Still, it is a good idea to keep your wallet or purse secure and not where it can be easily reached.

The tourist areas, as well as the main business areas, are very safe from this sort of crime. There are some bad areas where your risk will go up, but there is no reason to go to those areas if you are visiting the city.

Crowded areas around universities and technology centers could be a good target for terrorists, but so far they have not hit this area. There is concern about domestic terrorism, but so far that has not happened either.

There might be a person trying to con you into a private tour, but that is about as bad as it will get. The rare person on the street might try to scam you in some way, but common sense will protect you from harm there. Most scammers work online trying to steal people's identities.

As a university town, Durham has a lot of women travelers, and a lot of them travel alone. There are not a lot of crimes against women. There seems to be no difference in the level of danger for women and men.

Water is provided by the city and meets all federal and state standards for cleanliness. There have been no issues reported with the water from this area.

Safest Places to Visit in Durham

There are more than 30 miles of greenways and trails in the city, and all are safe.

The American Tobacco Trail is along an abandoned rail line through the city.

Duke University always has a lot going on, and interesting things to see and do.

Downtown Durham is home to the historic tobacco factory area with many historical buildings and tours available.

It is a trendy area with a lot of shops, bars, and restaurants.

Duke Forest is a 7,000-acre research forest with fields, trails, and much to explore.

It is home to hundreds of lemurs and one of the top sanctuaries for this type of animal in the world.

The Sarah P. Duke Garden is a 55-acre area of flowers, terraces, and arboretums.

There are five miles of paths and trails through the gardens.

There are many more museums and sights to see.

The Old West Durham area is an older part of town with a lot of restaurants and thriving nightlife.

Places to Avoid in Durham

Most of Durham is safe but some bad areas should be avoided.

The neighborhoods east of downtown have a lot of criminal and drug activity and should be avoided.

These areas should be avoided at night, and there is little reason to go there in the daytime either.

Just south of downtown, around Alston Ave., is another area where there is some crime at times.

The northern-most area of town has lower-income housing, and there is some poverty, but the crime rate is not out of the ordinary.

Areas around Roxboro and Fayetteville roads also have a reputation for being problem areas.

Some very nice areas in Durham have bad neighborhoods just a few blocks away, so some residential areas can be questionable.

Safety Tips for Traveling to Durham

So... How Safe Is Durham Really?

For the most part, Durham is a very safe city.

It has been rated among the safest in the state several times.

There are some bad areas, of course, and those should be avoided.

The tourist areas, as well as parks and Duke University, are very safe.

Your chances of being a crime victim are one in 13 in the western areas of the city, but one in 45 in the southern part of the city.

Durham has many distinct neighborhoods, and some are safer than others.

Locals can tell you which neighborhoods to avoid.

There are no tourist attractions in those bad areas anyway.

Assault is the most common violent crime in Durham, with robbery coming in second.

There are very few rapes and murders reported in the city.

There is more property crime than violent crime, according to police statistics.

General petty theft is the most common crime, and this is usually the result of unlocked cars or property being left unattended.

Car theft is a bit of an issue in parts of the city.

The safe areas are very safe, and the bad areas can be quite bad, according to police statistics.

In 2020, burglaries and robberies were down by about 15 percent, but assault cases rose by 15 percent.

Motor Vehicle theft rose by 40 percent, but there were only 14 in 2020, and eight the previous year.

Overall, violent crime decreased by 21 percent in 2021, and property crime went down by three percent.

The bottom line is, if you stay in the areas that are known to be safe, and avoid bad areas, especially at night, there is very little danger that you will be a crime victim.

How Does Durham Compare?