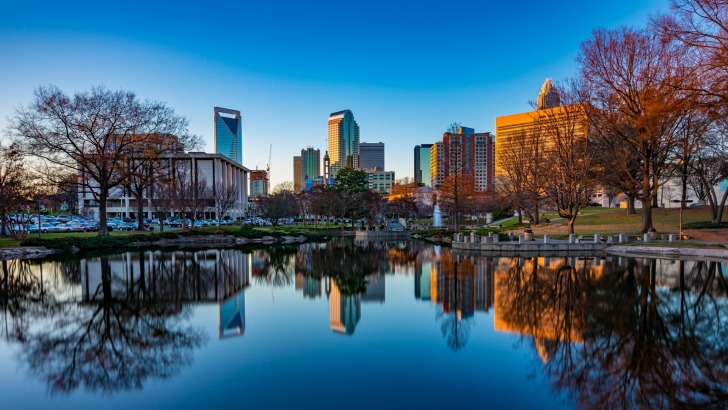 Get ready for a royally good time in the Queen City of Charlotte, North Carolina.

Named after Queen Charlotte in the 17060s, the city still has a regal vibe and continues population growth into the 2020s.

This is a diverse city, with less than 41% of the population being Caucasian.

This opens the door for cultural experiences that welcome people from across the globe, attracting 30 million visitors annually.

I visited Charlotte a few years back for the first time, and I remember being amazed at how green it was.

I lived in Oklahoma then, so it’s not like I hadn’t seen “green” before.

It was just at the level of Technicolor, like when Dorothy saw the Land of Oz.

Like many large cities, Charlotte hosts many unique neighborhoods.

Charlotte makes the Top 30 Places to Live, according to U.S. News & World Report, but it does have higher crime rates than the national average in every category that matters to tourists. While you can safely visit the city, we're giving this a medium risk because any large city needs to be visited using street smarts and situational awareness.

The Charlotte Area Transit System and the LYNX Light Rail are great ways to get around all the diverse communities. You can easily get taxis and rideshares or rent a car of your own. There's low risk with any option, and kudos to the transit system for having an app where passengers can report anything suspicious without taking up too much time or causing a scene.

There's a medium risk, with 230 pickpockets or purse snatching reported in 2020. Be sure to keep your wallet secured in a discreet place and use a crossbody purse with a zipper closure to ward off pickpockets. If you carry your wallet in your pants pockets, use the front pocket and wrap a rubber band around it to provide friction if someone tries to snag it.

Charlotte gets hurricanes or tropical weather after a storm moves inland. Hurricane season runs from June through October. Even the NHL team here is named the Hurricanes. There are severe thunderstorms here, but a tornado is fairly rare compared to other places in the south. Winter is usually quite mild, but a rogue winter storm isn't out of the question, and when it does happen, it can cripple the city.

The robbery rate is two and a half times the national average, but less than 20% of the robberies happen in public places. There's a low risk it will happen to a tourist, with petty theft much more common.

The typical utility and fake police officer scams happen in Charlotte. A recent trend involved a man wearing luxury jewelry scamming people after faking being broken down on the side of the road. In exchange for cash, he offered his valuable jewelry to "hold onto" until he could repay them. Yep, you guessed it - he never called. He was spotted on the side of the road, and the couple that got scammed recorded it and handed the video over to the police.

Less than half the violent crimes (44%) happen against women, and the sexual assault rate is actually lower than the national average. Despite the Southern charm and friendly community, it's still wise to avoid walking alone at night. Criminals in this area prey on the niceness of people. Keep your guard up.

There were no violations of water quality standards at any of the three treatment plants in Charlotte Water's jurisdiction in 2021. In a new twist, you can review the highlights of the annual Water Quality Report online, but you have to scan a QR code to get detailed information.

Safest Places to Visit in Charlotte

You can take tours of Charlotte to learn about the city’s history on foot or by bus, car, gold cart, and carriage ride.

There’s also a Funny Bus that is a rolling comedy club.

The Charlotte Liberty Tour is the best way to learn about the American Revolution history of The Queen City.

This interactive museum takes you through the history of the popular sport.

Behind-the-scenes tours are available for purchase.

There’s even a broadcast booth where you can try your play-by-play sports announcing skills or be the director of a NASCAR race.

Don’t miss the pretend pit spot where you can race against your friends to change a tire.

Discovery Place Science is a great family-friendly attraction to learn about the science of nature, astronomy, and wildlife.

Whether you want to visit the “Unseen Ocean” areas or walk among the dinosaurs of Antarctica, there’s just so much to explore here.

The Billy Graham Library takes you through the life of the famed evangelist’s life, with artifacts and mementos, plus a tour of the Graham family home.

You could even want vintage movies of his powerful sermons.

Don’t miss the Dairy Bar for a sweet treat.

Lake Norman is just north of Charlotte and boasts 500 miles of shoreline for all sorts of water activities.

Whether you want to ride a dingy or tour the lake on a yacht, there’s a rental service for any way to explore the water.

The Catawba Queen is a causal way to have a meal on a riverboat.

You can also just relax on the designated beaches or maybe go for some Southern fishing.

For a much more active water experience, you shouldn’t miss the U.S. National Whitewater Center in west Charlotte.

Across 1,300 acres, you can explore manmade whitewater rapids, zip lines, a deep-water rock climb (meaning you climb as high as you want and fall into a deep pool of water), rope courses, yoga, and ice skating (in the winter).

The rapids here have different areas for all skill levels, and training sessions are offered for adults and children.

Places to Avoid in Charlotte

The highest crime rates are in neighborhoods just north and northwest of Uptown.

Due south of the city, there are a lot of lower crime-rated neighborhoods, but heading east from there and you’ll run into more dangerous places.

The risky or downright dangerous neighborhoods aren’t located where the tourist attractions are, so there’s a rare chance you’ll end up lost in one.

You should still stay on main roads and interstates while avoiding taking shortcuts through an unfamiliar part of town.

Avoid the city if a hurricane or tropical system is approaching.

While Charlotte obviously doesn’t take the full brunt of hurricanes being so far inland, the remnants of a strong storm can still be dangerous and leave the city under lockdown or evacuation.

Don’t ever think, “I can handle some rain.” When these storms stall over a region it can lead to mass flooding, power outages, and a lack of food and resources.

Safety Tips for Traveling to Charlotte

So... How Safe Is Charlotte Really?

While the raw data provided throughout this article was from 2021 crime data, CMPD did give a mid-year update in 2022 about the crime for the first half of the year.

Gun crimes have gone up 25% in the past five years across the region.

One of the most disturbing parts of the summer was this nugget of information – “Division captains and members of the Crime Gun Suppression Team have advised they are seeing children as young as 13 armed and routinely committing shootings.

In most cases, these children are not prosecuted as adults and end up being released back to their caretakers where they go on to re-offend.”

In one incident, an innocent 11-year-old was sitting in a car and hit by a stray bullet, suffering life-threatening injuries.

This means even the youngest people you see in the city should be treated with a lot of caution.

While many of the crimes involve people who know each other, usually in a gang or drug crime setting, bystanders can get caught in the crosshairs.

While many residents are outraged at the high crime rates, those who have experience living in other large cities say this isn’t an unsafe city, and if you don’t look for trouble, you won’t find it.

Charlotte is a great city for urban, cultural, and outdoor experiences.

That will go a long way here.

How Does Charlotte Compare?