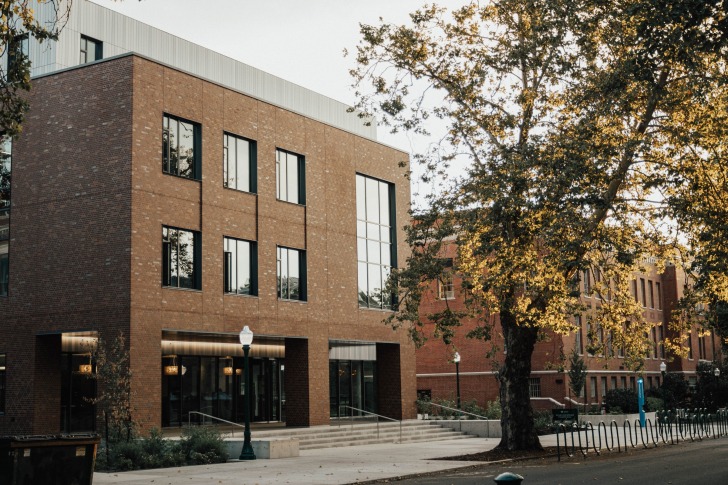 If you can’t decide whether you want to visit the mountains or the beach on your vacation, then Eugene, Oregon is a perfect choice.

That’s because both the Oregon coast and the Cascade Mountains are within driving distance.

You’re going to need to love the outdoors to visit here because so much of what makes Eugene unique is about nature.

This is a bicyclist’s dream city with hundreds of trails and roads built just for bikes.

This is an electric town where “odd” is normal.

It’s a socially conscious town and a liberal community.

Eugene is also home to the University of Oregon.

It’s sometimes referred to as “The Emerald City” for how green it is, but the city officially markets it as “A Great City for Arts and Outdoors.”

U.S. News and World Report ranked it in the top 25 safest places to live and it is also one of the fastest-growing cities in America, as people look to get away from it all with the unique culture Eugene holds.

There's a medium overall risk. Inbetween the laid-back vibe and outdoor adventures, there's a concern about growing hate crime numbers. Though the police department says that's more about the strict reporting and accountability processes it has than the actual risk of hate crimes. The weather can be unpredictable, and usually not for the better.

You can take a local taxi or rideshare, but there's a low risk you'll run into any danger. You might get some judgmental looks because this is a town that wants you to ride a bike. It's all about the carbon footprint and protecting the environment. If you want to see the coast or mountains, getting a rental car is the best bet.

The Eugene Police Department crime report for 2020 shows just 26 cases of pickpocketing and purse snatching. This is a crime rate of 15 per 100,000. That's a low risk. The higher theft category came in the form of shoplifting, according to the report.

There's a medium risk of natural disasters here, with western wildfires getting worse every fire season. In a town that wants you to stay outside, the smoke from a wildfire can cripple air quality. The Eugene city website also lists other disasters that can happen here; dam failure, earthquake, flood, landslides, and volcanoes. On an average day, you'll just deal with a lot of rain, but there are risks for bigger incidents.

Simple assaults are a little higher than the pickpocketing risk, so we're going to give this a medium risk. The rate of simple assaults is 600 and 100,000 and 224 in 100,000 for aggravated assaults.

While the city website does advise how to prepare for a terrorist attack, there isn't a hard target in this region of the country. We'll go with low risk. Better to keep an eye on volcanoes than terrorists here.

The city does list a slew of scams in the area, but it's more for education than exact risk. We'll call it a low risk because we know you'll prepare ahead of time to review the scams and avoid being a victim.

There's a medium risk for female travelers given the higher risk of a hate crime here. Gender and gender identity are two classes of people protected in the hate crime laws. While it's not a looming threat, it is just something to be aware of when visiting Eugene.

Oregon's water is among the best rated in the nation. Eugene is proud of its dedicated process to making tap water clean, even when natural disasters like wildfires put it at risk. It's still among the top tap waters you can find in the United States.

Safest Places to Visit in Eugene

There are five main neighborhoods to visit in Eugene.

There are boutiques and art galleries as well.

You might even see street performers while you wander.

People call it “The Whit.”

This is a colorful, artsy community and the place to find farm-to-table eateries.

You are also going to find some of the best craft beer here.

You can get a tour of the university or watch the Ducks play one of the many popular sports.

This busy part of town is as close to a traditional shopping area as you’ll find in an electric community like Eugene.

Live music fills the air as you weave into and out of stores, and this is also a great starting point for one of the many walking and biking paths in the city.

There’s a little more history and culture in this neighborhood and parks galore.

Places to Avoid in Eugene

Crime maps show the west side of the city has the most incidents of theft and robberies.

The university residential areas can get noisy at night.

It’s a college town and people want to party.

You might want to avoid those rowdy parties for safety and stick to the more touristy spots of town.

The homeless gatherings under the Washington Street Bridge can cause some safety concerns for tourists, so avoid this area if you are walking alone.

Don’t engage in conversation with a homeless person asking for money and certainly don’t flash any cash in this area.

Safety Tips for Traveling to Eugene

So... How Safe Is Eugene Really?

It’s a safe place to visit if you embrace the uniqueness of the people and the vibe.

People who are expecting a basic American city might be caught off guard by the eccentric nature of this town and some might even call people “creepy.”

It’s not creepy, it’s just an artsy community where embracing creativity and self-expression is encouraged.

The area west of the university is a little rowdier, and with parties that happen nightly, it can draw more crime.

While the average middle-aged tourist isn’t going to be lured to a college party, some younger travelers might want to experience the college party culture.

The largest number of crimes in this town come from thefts inside vehicles, so we punctuate that point of not leaving anything in the car if you rent one while you visit.

How Does Eugene Compare?